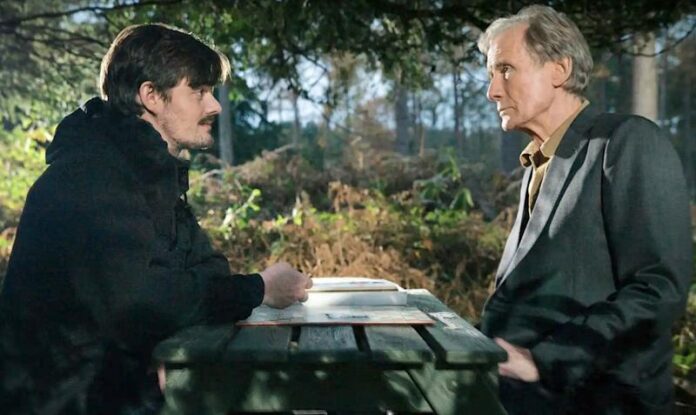 Board games seemed to have made a comeback during quarantine. Numerous families and friends groups dusted off their Settlers of Catan and Clue board games for in-person and even Zoomed gameplay. And as everyone knows, familiar frustration and arguments come along with the competition. Both of these concepts are explored in the new and very quirky British film Sometimes Always Never.

Not to be confused with this year’s intimate abortion drama Never Rarely Sometimes Always, the prestige comedy focuses on premier Scrabble obsessive Alan (the always just right Bill Nighy) and his search for his missing son, Michael. A better player than he is father, Alan is joined in his pursuit by his other son Peter (a sweet and moody Sam Riley), an ice cream truck artist, which is a thing apparently. He lives with his wife (Alice Lowe) and distant teenaged son Jack (Louis Healy). All are dealing with their various failings and shortcomings when Alan and Peter leave to find out if a recently discovered body is that of the missing Michael. As always, through a series of amusing twists and turns, Alan starts to believe another online Scrabble player is Michael, drumming up the past and calling his relationship with Peter.

Essentially what writer Frank Cottrell Boyce tries to do is use the art of Scrabble as a metaphor for a broken parent/child relationship. But then when that doesn’t fully work, he uses Alan’s occupation, suit tailor, as a metaphor. The title of the film is a nod to how British men “should” button their coats, sometimes button the top button, always button the middle one, never the last one. With so many emotional conflicts bubbling at one time, Boyce’s message gets lost.

Despite some very cloudy messaging, the dialogue is funny and charming. I could listen to Nighy’s and Riley’s father-son banter for two hours on its own. As Peter’s wife Sue, comedian Alice Lowe delivers each line with genuine joy. Though underused, Lowe brings out something sweet in the well-meaning, but slightly dim wife and mother.

Its Bill Nighy’s movie though, and he brings complexity and clarity to a foggily written character. His Alan runs on intellectual superiority and huge bursts of energy and a quiet sadness. Nighy navigates those emotional pin-turns beautifully. Riley plays off of Nighy well, letting the veteran actor take the more comedically dominant role but stepping in when appropriate. Their relationship and the literal and figurative dead-pans between the two are what keeps the film’s engine running.

Rich in jewel tones and at times a few muted pastels, the film is stuffed with visual surreal nostalgia. From clearly painted backdrops to bits of animation, to Wes Anderson-like symmetry and framing, first-time feature director Carl Hunter clearly knows how to visually emote, clearly influenced by eastern European filmmakers. This comes in handy when the slightly scattered story starts to veer off. Between the imagery performances and consistent visual style, there’s always something to keep you engaged.

Sometimes Always Never borders more into the muffled weird type of quirky rather than the delightfully hilarious quirky that one might expect from a deadpan British surreal comedy. But like most of Bill Nighy’s ever endearing performances, this dramedy might be worth watching.

Sometimes Always Never is available June 12th for virtual theatrical release and on-demand through your cable provider July 10th. Watch the trailer below.