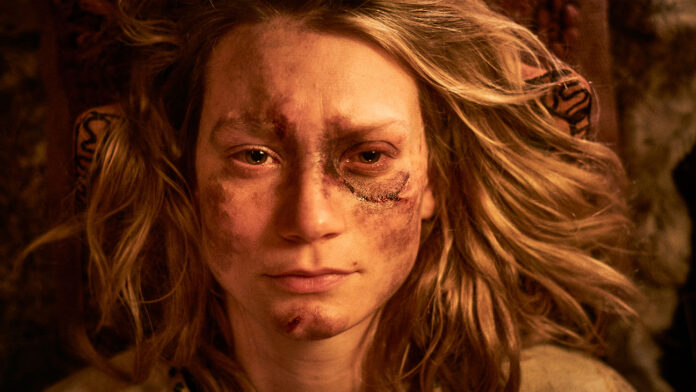 Similar to this year’s Grimm horror Gretel & Hansel, the swapping of titular names in Judy & Punch speaks to the film’s divergent central focus. A traditional Punch & Judy show is one of masterful puppetry, led by the male figure Punch whose use of excessive violence, including against his wife Judy, is the stuff of well-worn British humor, an accepted part of society since the 16th-century. But what happens when that violence becomes ingrained within a society, corrupting it from within?  Actress-turned-filmmaker Mirrah Foulkes tackles this question in one of the strangest revenge comedies of the year, albeit one that is tonally shaky even as it drives to make a point.

Punch (Damon Herriman) takes a little too much after his puppet namesake. The misogynistic, hedonistic, heavily-drinking puppeteer is a celebrity in the superstitious town of Seaside, a place where public witch burnings and hangings are a regular form of entertainment for its poor citizens. We’re introduced to him alongside his lovely partner and wife, Judy (Mia Wasikowska), as they perform their puppet show for a room full of awed children and poor adults. When doing their act, Punch and Judy are in perfect sync. The love they have for one another carries through the marionette strings. But at home, Punch is a self-obsessed alcoholic who lies through his teeth, philanders about town, and can barely be bothered to help take care of their child.

Foulkes has a hard time balancing the seriousness of her themes with the comic presentation of violence. In a drunken stupor, Punch, who has been chasing down a dog who stole his beloved sausages, accidentally causes a death that will be long-lasting and traumatic. But the catalyzing event is presented in a way that is so goofy it’s hard to take seriously, and you wonder when it’ll be rectified in some silly off-hand moment. That moment never comes; instead, Punch commits a deliberate act of heinous violence to cover up what he’d done. It’s clear Foulkes is trying to draw a connection between the fictional violence we tolerate in entertainment and its grim reality, but there’s an imbalance that makes Judy & Punch tough to take seriously.

When Judy & Punch drifts totally into magical realism it finds renewed purpose and energy, however. Judy makes herself at home among the misfits, the castoffs, the supposed-witches living on the outskirts of town in a forbidden forest that’s like something out of a Terry Gilliam movie. It’s here that Judy’s feminist spirit and need for vengeance takes hold, surrounded by other women who have been ostracized by society. Meanwhile, Punch is back home blaming others for his own failures, while trying to stay one step ahead of the law.

Production design is top notch (the film was nominated for multiple AACTA Awards, and for good reason), with detailed, intricate costumes and setpieces suggesting a larger world of dark fantasy ready to be explored. It’s undeniable Foulkes is a promising director who, in her first shot out of the gate, has created something visually unique and inventive with a clear perspective. Getting that message across is where the breakdown happens. Foulkes also gets a lot of help from Wasikowska who has made herself quite comfortable in these offbeat tales of revenge. Somehow a tale of cold-blooded payback between a pair of warring puppeteers feels like the most Wasikowska thing ever. Herriman is appropriately hateable as Punch, although his cartoon villainy is one of the things that helps cloud Foulkes’ true intent, and keeps Judy & Punch from reaching its full potential.