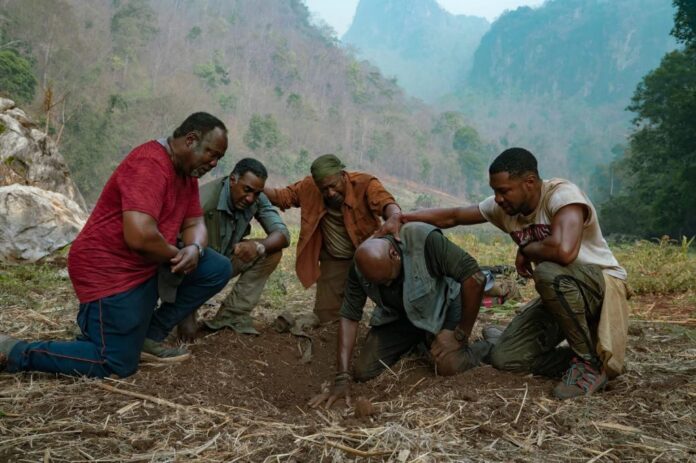 There was a stretch when Spike Lee seemed to have lost his voice. During that time he became, what I feel, was a very mediocre filmmaker delivering forgettable movies that dabbled with relevance but never really were. She Hate Me is provocative, but…meh? But when Spike Lee is on, and has a vital message to deliver, nobody is better. Right now he’s on the top of his game like never before, and Da 5 Bloods, the rare Vietnam War movie that feels timely and important, is Lee connecting the dots of this country’s racist past to its racist present through the lens of the military.

Backed by the soulful anti-war sounds of Marvin Gaye, Spike Lee’s Da 5 Bloods is a story of brotherhood, a story of protest, and a story of African-American soldiers fighting for a country that feared and hated them. The question, which Lee has posed often, most recently in BlacKkKlansman, is how can this country move on when we are still haunted by the sins of the past. Lee tackles this question in incendiary, if uneven fashion, weaving an overlong but compelling war movie the likes of which few filmmakers would dare to tell.

The film gathers together a number of veteran black actors rarely given their moment to headline. Delroy Lindo, Norm Lewis, Isiah Whitlock Jr., and Clarke Peters play Vietnam War vets who served under the command of Stormin’ Norman (Chadwick Boseman in a supporting role), a revolutionary who leads with a “Black Power” fist in the air. On a mission, they uncover a cache of gold intended to pay off the Vietnamese army and decide to bury it and return for it later. That plan blows up when they come under attack, Norman is killed under mysterious circumstances, and the area is napalmed so there’s no chance of finding the buried treasure. Years later, the men return in-county when a mudslide reveals the location, but the ghosts of the past still linger, bringing heartache and pain to the returning soldiers.

Lee, along with co-writers Kevin Willmott, Paul De Meo, and Danny Bilson, put a lot of burden on themselves to tell as vast a story as possible. Da 5 Bloods very easily could’ve been a simple adventure story, even with Lee exploring how black men have been dying for America since Crispus Attucks. But he also tackles America’s part in the Vietnam War disaster and the devastation they caused that country, and its own struggle to rebuild. There’s even more, as the lost treasure becomes almost like a means of the soldiers getting what they’re owed for fighting and giving their blood to a government that doesn’t give a shit about them. Gold bullion as reparations? For some of the returning vets, like Paul (Lindo) who harbors resentments and guilt over his past actions, he sees reparations as a way of making himself whole. For some others, like the well-to-do Eddie (Lewis), the gold can be used to advance causes that help black people as a whole, seeing it as exactly what Norman would’ve wanted.

There’s a lot going on in Da 5 Bloods, which may explain the heavy 2 1/2-hour runtime, but it still feels like there’s too much padding. Other factors are thrown into the mix, including the sudden arrival of Paul’s estranged son (Jonathan Majors), causing a bit more volatility to a powder keg already set to blow.  Mistrust simmers within the group, and so does old age, while tensions with those of other races nearly derail them at every turn. Lee gives each soldier a different perspective, though, to keep it from being preachy and one-note. All of them are political, but only Paul proudly wears his “Make America Great Again” cap on the retrieval mission, which makes him an outcast among outcasts.

It’s always interesting to see Lee’s style put to use in a battlefield setting, and visually it resembles his 2006 film Miracle at St. Anna. The usual Lee techniques are here, from the mixing of archival footage to the classic dolly shot, the latter saved for one of the film’s rare moments of true hope.  Violence is off the charts, and the digital blood can be distracting when everything else is so authentic. He also does something interesting in that he doesn’t recast the characters during flashback, nor does he digitally re-age them until one particular moment, almost as if Lee is making the case that the ghosts of war are ever-present. Further making that point is Lee connecting all of this to recent movements, including Black Lives Matter, to show that the struggle for equality rages on, and that the blood spilled by those who fought for it will not be forgotten.

Da 5 Bloods works on a number of levels; as a war movie, a buddy film, and a treasure-hunting adventure ala The Treasure of the Sierra Madre. While the lack of a true focus can muddle the message somewhat, Lee is never short on big ideas and he’s one of the few directors we would trust to share them in the way he does.