Stranger Things star Milie Bobby Brown might have another hit Netflix franchise on her hands. The first images have arrived for Enola Holmes, which stars Brown as the brilliant kid sister to Sherlock and Mycroft Holmes. The film is based on Nancy Spring’s popular series of YA novels.

The images (via EW) reveal Brown as Enola Holmes, plus Henry Cavill as Sherlock Holmes, and Sam Claflin as the eldest Holmes, Mycroft. On her 16th birthday, Enola wakes up to find that her mother (Helena Bonham Carter) has vanished, and it’s up to the youngest of the family of detectives to figure out what happened. All the while she must race through London to escape from her brothers who want to send her away to finishing school.

Enola Holmes is written by Jack Thorne (Wonder) and directed by Harry Bradbeer. Netflix will debut the film in September. 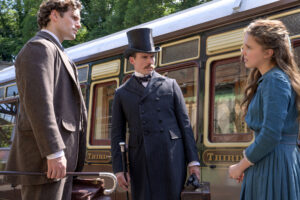