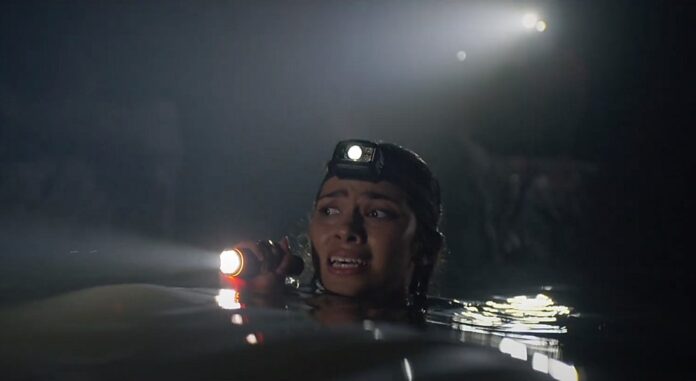 The 2007 horror Black Water became something of a cult hit among genre fans who dig their creature-features swampy and scaly. Based on the true story of a crocodile attack in Australia’s northern territory, it followed a pregnant woman, her sister, and her boyfriend as they tried to survive something similar. The film went on to make a little over $1M on a shoestring budget, and now more than a decade later it’s finally getting a sequel in Black Water: Abyss.

Andrew Traucki, who co-directed the original movie, goes it solo this time, with a cast led by Jessica McNamee (The Meg), Luke Mitchell (Agents of SHIELD), Amali Golden (The Invisible Man), Benjamin Hoetjes, and Anthony J. Sharpe (Robert the Bruce). This time, the action moves from the swamps to a cave system during a tropical storm, where the people trapped inside are attacked by deadly crocodiles.

SYNOPSIS: In Black Water: Abyss, a group of friends explore a remote cave system deep in the forests of Northern Australia when a tropical storm hits. As rising flood waters trap them deep below the surface, something even deadlier emerges from the darkness – killer crocodiles.

Black Water: Abyss hits theaters and VOD on August 7th. Between this and the box office success of Crawl it’s like killer crocs are making a comeback.