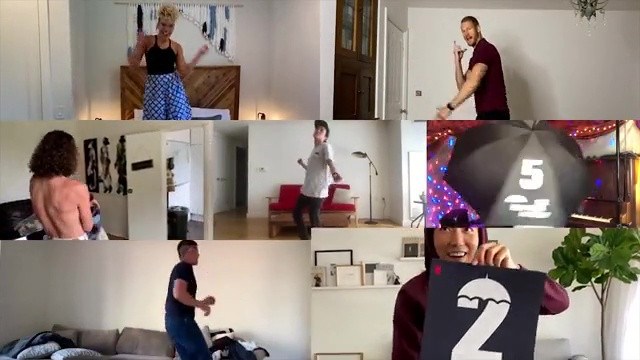 There’s no escaping the X-Men vibe that comes from Netflix’s The Umbrella Academy. It’s something that has followed the Dark Horse comic around since it was created. But what really separates the two, and is quite clearly evident in this new trailer announcing season 2, is that Umbrella Academy has a totally goofy sense of humor. Or at least the cast does.

The show’s cast get down to the sounds of Debbie Gibson’s “I Think We’re Alone Now” in the new announcement trailer, confirming season 2 will arrive on July 31st.  Since we’re living in a COVID world, they all joined up for a ZOOM dance party so they could recreate the iconic dance number from season 1. I think that sums up just how wacky this show is better than any plot synopsis about superpowers could.

So check it out if you want to see Ellen Page, Tom Hopper, David Castaneda, Emmy Raver-Lampman, Robert Sheehan, Aidan Gallagher and Justin Min show off their moves.

SYNOPSIS: On the same day in 1989, forty-three infants are inexplicably born to random, unconnected women who showed no signs of pregnancy the day before. Seven are adopted by a billionaire who creates The Umbrella Academy and prepares his “children” to save the world. Now, the six surviving members reunite upon the news of their father’s passing and must work together to solve a mystery surrounding his death. But the estranged family begins to come apart due to their divergent personalities and abilities, not to mention the imminent threat of a global apocalypse.