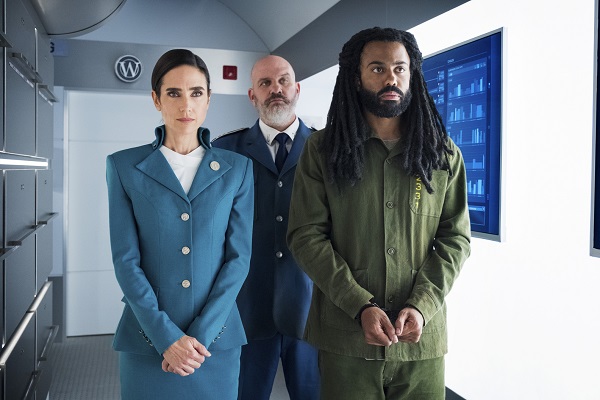 As stated last week, the TV adaptation of Snowpiercer was seeming to deter a little bit from the class-warfare struggle from Bong Joon-ho’s pre-Parasite adaptation of the French graphic novel “Le Transperceneige” in favor of a serialized police procedural. Basically, the show was promising to have some sort of “Murder on the Polar Express” vibe and not factor too much of the classism that made the film so beloved.

However, episode two of Snowpiercer: “Prepare to Brace” reverts back to the issues surrounding those in the tail section of the train as well as continuing to solve the mystery murder aboard the train as it circles the globe. The episode opens with the aftermath of the tailed section’s failed rebellion as members of the Wilford Corporation heads to the tail section to deliver some penance. Just as they are about to “freeze off” a child’s arm (just as was done in the film, just not to children), the child’s mother volunteers to take her daughter’s place as we get to see how the “taillies” are subjected to brutal reprisals. This allows us to see just how cold the outside world is, as it only takes a minute to render the poor woman’s arm useless as it is then shattered off with a mallet. But breaking off frozen limbs is not something that will break their spirits. In fact, they probably are ready to start planning for yet another rebellion.

One big nitpick of the concept of Snowpiercer is: how do you build a self-sustaining train to be able to circle the globe indefinitely, especially when there are no longer any resources to use to fix anything (no new electricity or diesel gas)? And what happens if there’s a problem on the tracks? Glad to say, episode 2 gives us a dose of reality is all sorts of issues arise that could pretty much doom the remainder of humanity. An outside avalanche early on has a cascading effect on many of the internal workings of the train, and if they don’t get fixed quickly everyone’s in jeopardy. Last week’s big reveal that Melanie (Jennifer Connelly) who is known as “the voice of the train” is really “Mr. Wilford,” the all-knowing and all-powerful head of the train (who was played by Ed Harris in the original film), or at least Mr. Wilford is a ceremonial title at this point for the leader. With her role being much bigger than “hospitality,” she needs to make sure the train literally runs on time and gets everything resolved. The system of putting prisoners in hibernation is failing, and there are rough tracks ahead.

Oh yeah, there’s still a murderer onboard Snowpiercer who’s hacking off penises on the train and Layton (Daveed Diggs), the only living police officer on Earth (and fellow Tallie) has been special privileges to be able to leave the tail section and explore the full train (with an escort of course). Now he gets to work his magic and he goes about solving the case. First off, it shows that as prepared Mr. Wilford was when creating and staffing the train, certain things were not factored in, like police officers and doctors to perform autopsies, as the one on staff wasn’t 100% sure what she was doing. Lucky for her, Layton’s seasoned enough to determine the cause of death just by examining the body. Layton’s working two angles though, he’s trying to get information to solve the case, but at the same time, he has to slyly gain insight to areas of the train he isn’t privy to, areas that with knowledge of he could help give the Tailies relevant intelligence to launch a successful rebellion. Unfortunately, it’s not an easy task to try and get details about other cars while interviewing possible witnesses, with Bess monitoring his every move and quick to tell witnesses his questions aren’t relevant to the case.

While the original movie had the heroes race from the tail section to the front of the train quickly (meaning we barely could learn about each of the 1000+ train cars), Snowpiercer takes its time, which allows for more worldbuilding to show us all the ins and outs of the train. We get to see the uber-rich as they are discussing all the latest gossip pertaining to the murder investigation as well as show their privilege when a lawyer (who could at this point very well be a suspect since everyone’s a suspect) volunteers to be a part of the investigation even though the woman’s daughter reminds her she has no expertise on murder investigations. Having Layton investigate and interview witnesses of all sorts of different social scales of the train not only gives him a quick culture shock, but also lets us know that the train definitely has a middle class in addition to the tail and super-rich sections. Layton also quickly knows that all he has to do is name drop Mr. Wilford for obedience and respect. But him asking a witness about noodles gives him a hunch for what the murder really might be about.

His journey to the “night car” also expands the world a little as the train has an almost underground social scene complete with entertainment, and even prostitution. In the night car, he runs into his ex-wife Zara who lives there now and offers a “therapy session” in a water-encased part of the train. The tranquility of the water surrounding him allows him to meditate on the past, which naturally has him think of better times, when he proposed to her and the two were madly in love. As the two sit in the meditation room, flames once again spark and the two make love. This will most certainly lead to a problem with fellow Tallie Josie who it seems is his newfound love interest and is in the tail section taking care of his son Miles while he is investigating the murder. Speaking of Miles, he has been selected for the apprenticeship program to leave the tail section. Fans of the movie kinda know what lies ahead for children selected by “the lottery” and suffice to say, it’s probably not good for them. This is also happening without Layton’s knowledge.

Now with a clear head, Layton can focus on the case and as they do the autopsy on the body, it’s determined that the deceased was hacked up using kitchen tools. After a discussion about cannibalism (in which they say the Tailies are cannibals, which Layton confirms, or does he?), this leads him to think that someone in the butcher car is responsible. After being refused access unless they had a notary (probably the train’s version of a warrant). Before he and Bess can return with the said notary, an avalanche hits the train and causes a seismic event for everyone. The rumbling causes one of the butchers to accidentally hit a window with a cattle air gun, causing the window to shatter, not only freezing and killing the butcher staff, but also freezing the cattle and destroying a big food supply for the train. In the aftermath, we are also introduced to “breach worker” Bojan Boscovic (played by Van Helsing’s Aleks Paunovic), who seems to have a weird affection for the freezing temperature. Because the cattle area is sealed off, Layton and Bess are still able to search the freezer, which wasn’t affected and they come across the missing legs of the murder victims.

Continuing to sprinkle bits of the class struggle the Tailies have to endure, one of the tail members is forced to perform an oral service on brakeman Oz to secure medical supplies for the woman whose arm was frozen off. This scene and a scene in the night car helps showcase a little bit of LGBT representation on the show. That, Melanie’s decision to cut off supplies to the tail, and the dilemma of having to let some of their children be drafted into the apprenticeship lottery show how little control over their lives they have. While the murder mystery is taking center stage for the show’s overall narrative plot, it’s still trying to maintain the roots of Bong Joon-ho’s original film.

Layton realizes that the butchers didn’t commit the murders. He argues that if they just wanted to “retail” the victims for meat, why brutally torture and castrate the victims. We now have a serial killer on our hands. Bess listens to his argument and also wants justice instead of just a speedy outcome. Layton also utilizes an object he stole from the butcher car to be able to pick his lock and find a way to deliver a note detailing car intelligence to fellow Taillies who happen to be walking in his car for work. He causes a scene and gets assaulted by the guards in the hope of ensuring the note can be seen by them, but he isn’t successful. When confronted afterward by Melanie afterward, he tells her of the plight of the tail and the class imbalance, while she argues about survival and order. Just when it seems as though his role as the train’s detective is done, he reveals to her that the murder victim was a “Wilford rat” who was passing information along and Melanie needs to know what secrets were passed. The two’s partnership is far from over.