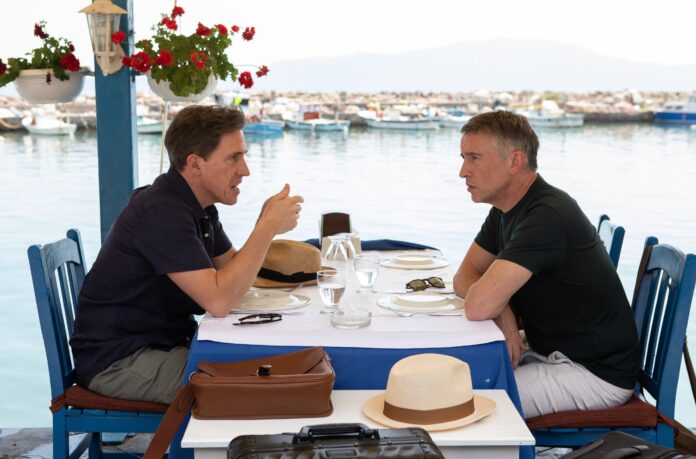 Actors/comedians Steve Coogan and Rob Brydon are back at it. The duo has teamed up with director Michael Winterbottom once again for yet another trip. Each chapter of the ‘trip’ series begins as a miniseries that is then merged together to make a film. The fourth and final installment of this series is The Trip To Greece.

Starting in 2010 with The Trip, Steve and Rob find themselves on cross-country food tours every three to four years. From their home country of England to Italy, Spain, and now Greece (plus a bit of Turkey) – following Odysseus’s footsteps. The journey that took Odysseus ten years to complete, the two of them will conquer in six days. Not only will the trip be shorter than Odysseus’s, it will also be safer and include much better cuisine. Steve is quick to point out that the entire series has been their own ten-year journey, just like Odysseus’s. 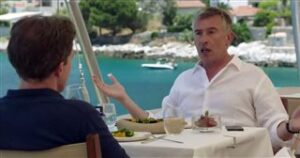 Steve and Rob begin in Troy with Ithaca as their destination. At each stop the friends take in historical sites before enjoying delicacies at various restaurants. Whether they have a plate of delicious food in front of them or a pile of ruins, the banter doesn’t seem to stop.

Each location follows a very similar pattern – Steve begins discussing the historical significance of where they are going or where they just were. Rob quickly finds some way to loosely connect a word, thought, idea to a ridiculous impression. Steve tries to ignore Rob and keep chugging along with his history lesson. Eventually Steve succumbs to Rob and they go back and forth with impressions, or noises, or singing…or all the above. Rinse and repeat for a little under two hours and there you have it, The Trip To Greece. 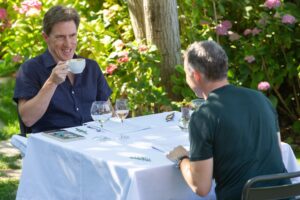 The Trip To Greece does have some funny moments between the travel buddies, however they are few and far between. Throughout the film I was having trouble thinking of a more annoying table to be next to at a restaurant. At one point, Steve and Rob are literally acting out the noises a dentist’s drill makes. That left me to wonder…why take a bunch of obnoxious conversations, film them, and turn it into a movie? I really was struggling to answer that question. Maybe Coogan and Brydon’s conversation will strike as comedic gold to some, but I am certainly not in that group.

On top of the above, there is a storyline that keeps popping up which seems incredibly misplaced. Winterbottom also mixes in sad melodic music which only further adds to the strangeness of the film. I haven’t seen the first three films in the series, and after The Trip To Greece, have no desire to. If you are a fan of them, I’d imagine The Trip To Greece is your cup of tea. If you are like me and haven’t gone on a vacation with Coogan and Brydon yet, I think you’re better off anywhere else.