Home Reviews Cortland Review: ‘Inside The Rain’Bipolar Dramedy Nearly Has Too Much On Its Mind
Facebook
Twitter 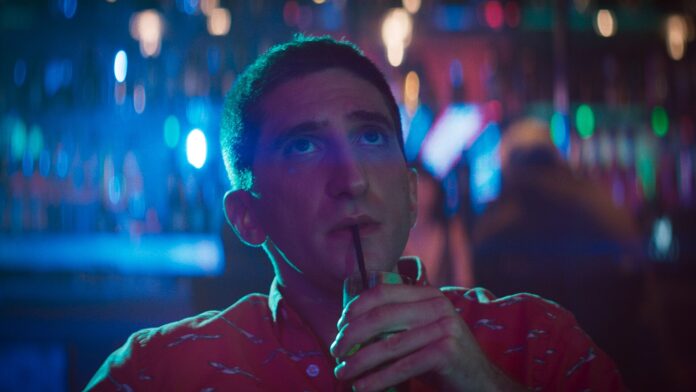 “Recklessly extravagant.” It’s a term that comes up a lot in the new film, Inside the Rain. Instead of describing a Jay Gatsby or Marie Antoniette type, the film’s lead uses it to describe himself; a well-meaning, hard-living man with bipolar disorder. Written, directed, and starring first time director Aaron Fisher, Inside the Rain explores what it means to be “recklessly extravagant” and how bipolar disorder affects one’s life.

When Ben (Fisher), a bipolar young man, is expelled from college for a “misunderstanding,” he goes against the advice of his parents, his psychiatrist, and his school and decides to prove his innocence by making a film about it. He finds his leading lady in Emma (Ellen Toland), a naked sushi model/cam girl. As they work together to find funding, Ben must juggle his illness, his expectations, and those around him as he tries to navigate what to do next.

Fisher creates some very interesting cinematic beats, not afraid to wallow in the awkward and in real life’s quiet moments. The dialogue doesn’t always feel natural, especially when Ben interacts with women. However, the pacing is so fast that the wincingly uncomfortable doesn’t last too long.

At points, witty and trite quips weigh the film down. This takes away authenticity that might have been established by its accurate depiction of bipolar disorder. Patients with it can go off their meds, be obstinate, obsessive, and have illogical thought patterns, all of which the film captures fairly well. It’s not that the topic of mental illness has to be taken with kid gloves, but to be so brazen and brash about it can be disarming for the viewer. As the action progresses and we venture farther into Ben’s treatment and desire to make this film, the easier it gets to watch.

Working in his favor is a very strong troupe of performers behind him. Rosie Perez shines as the truth-telling psychiatrist, providing Ben with stability and sense. Eric Roberts pops in and out as a very convincingly shady film producer. Two of the strongest performances go-to character actors Paul Schulze (Nurse Jackie) and Catherine Curtain (Stranger Things) as Ben’s parents. Though they each have limited screen time, they give very complex and moving performances that show the difficulty and love that goes into parenting a bipolar son.

It’s rare that a film feels lived in, that a character would exist if the viewer was watching or not. To reach that distinction, despite some very glaring flaws, is no easy feat for a first-time filmmaker. As writer, director, actor, and even co-editor, Fisher seems to have complete control over the film’s voice. There’s a reason Inside the Rain feels so personal, whether that’s a good or bad thing.

Now available on Amazon Prime. You can watch the trailer below.