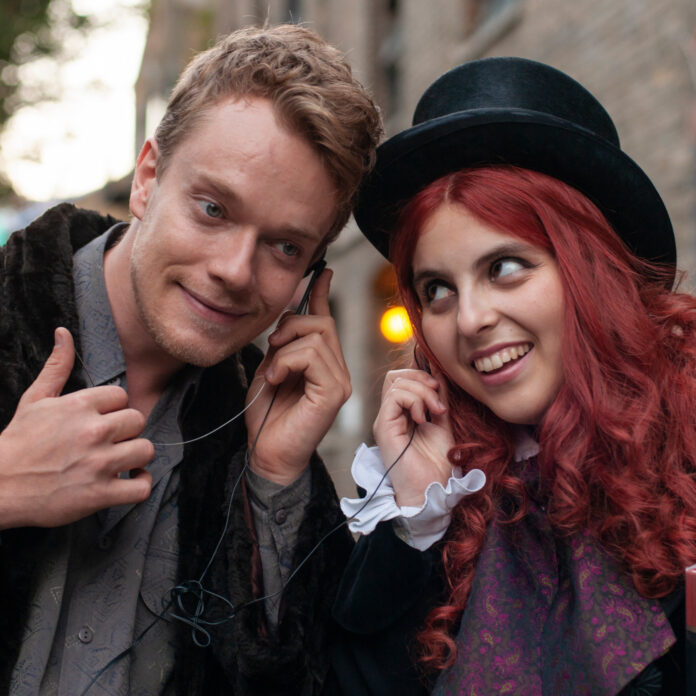 It’s almost summer and that means it’s the season for coming of age films. Leading the charge is How To Build A Girl, an English set comedy, based in self-discovery and the power of music. Directed by Coky Giedroyc, with a screenplay written by Caitlyn Moran and John Niven and a premiere at the Toronto International Film Festival, How to Build a Girl is a charming yet uneven story of girl power and growing up.

Set in the 90s and based partially off of Moran’s real life and novel of the same name, How to Build a Girl focuses on aspiring writer and sixteen-year-old Johanna Morrigan (Beanie Feldstein, Book Smart, Lady Bird). Living with her lower-class working family in Northern England, Johanna yearns for notoriety and adventure, as seen in her imaginary conversations with her “muse wall,” a collection of famous minds and writers throughout history. Pulled into music by her father (a slightly off Paddy Considine) and brother (a spot on Laurie Kynaston), she decides to try to be a rock critic. Despite a lack of faith and sexism by her fellow writers, Johanna eventually makes it on staff and under the wing of a sexy critic (a perfect Frank Dillane, Fear The Walking Dead). Through her job, she starts to develop a love of music and a fondness for musician John Kite (Game of Throne’s Alfie Allen), her first interview. As she gets caught up in her new fame and power, Johanna must learn that her actions have consequences and that some of the most important people in your life are the ones that have your best interests at heart.

Though Feldstein has the chops to pull off the emotional weight of her character, her distinctly North English accent takes a good amount of time to get used to. With coming of age stories, there has to be some quality that warms the audience to the main character, so that when they go through that transformation, most likely an unflattering one, we are still on their side. We eventually get there, through physical comedy and sincerity, but it takes a minute.

As the mysterious and enigmatic musician John Kite, Alfie Allen is funny yet untouchable. It’s nice to see him playing a happy person and not the wounded antihero he played on Game of Thrones. However, his performance feels distant, like we walk away not really knowing who he is. That may be purposeful, as we see him fully through Johanna’s eyes but why she’s obsessed with him isn’t really apparent.

Playing Joanna’s mum in a performance that sneaks up on you is Sarah Solemani. If Feldstein is the heart of this film, Solemani is the veins, taking the emotion where it needs to go. As her son and Joanna’s brother, Laurie Kynaston delivers a strong breakout performance despite his screen time petering off towards the film’s end. Also worth noting is the always delightful Chris O’Dowd as a hilarious local news anchor who has clearly had enough of the locals that come on his show.

If you know anything about British film or comedy, the cast is stacked with the who’s who of the industry. From Michael Sheen (Masters of Sex) to Sharon Horgan (Catastrophe), Dame Emma Thompson, to Sue Perkins and Mel Giedroyc from The Great British Bake-Off, director Giedroyc smartly has the cream of the comedic crop popping in and out. Most of these performances can be described as cameos but it’s a delight to pick out your favorites.

Like some of the uneven performances, the film stands on uneven themes. While the importance of family and staying true to yourself is seen through, issues of fatphobia and self-harm seem to pop up out of nowhere. Despite this, Giedroyc ultimately pulls off a fun and engaging story, full of music, life and the reminder of what being sixteen is like.

How To Build A Girl is available through on-demand and streaming services. Watch the trailer below.