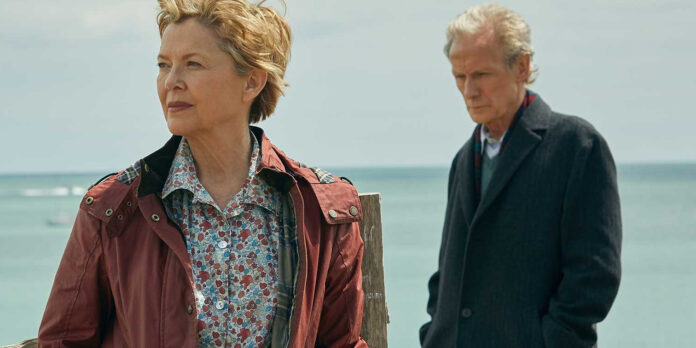 Watching divorce unfold is a lot like passing by a car wreck. You know it’s terrible, but you slow down anyway and refuse to turn away. Many movies have been made that chart the end of a marriage, and in just about every case it’s the little, personal details that make them compelling. Even in an inert drama like William Nicholson’s Hope Gap that turns out to be the case. Based on Nicholson’s recollections of his own parents’ divorce, the intimate aspects ring true, as well as the lead performances, that you can forgive its staginess and dispassionate tone.

Hope Gap is based on Nicholson’s own Tony-nominated stageplay The Retreat from Moscow, and it never quite escapes the confines of the stage. Annette Bening and Bill Nighy get the spotlight as long-married couple Grace and Edward, who are approaching their 30th anniversary. In the small English coastal town of seaford, they live a quiet life, or at least it would be if Grace would stop trying to stir her husband up. An early kitchen conversation, where Grace tries to get a rise out of the passive, closed-off Edward, just to get him to do something, ANYTHING in retaliation to show that he cares, suggests this is an oft-repeated tangle. He seems done with it; she seems to not have a clue what’s going on.

The arrival of their son Connor (EMMA. star Josh O’Connor) from London doesn’t make things any better. In fact, it gives Edward the courage to do what he’s long wanted to do, which is to leave and file for divorce so that he can be with someone else. Connor, who is coming out of a failed relationship of his own, must navigate this awkward space between the two people he cares for most in the world. At the same time, their crumbling marriage shines a light on his own issues finding the right person to love.

There’s great material here for all to work with, but Nicholson’s script and bland direction cause it to fall flat. The conversations are long, seem geared toward an audience that isn’t there, and set in only a handful of locations. A couple of sweeping coastal shots would have meant more if better integrated to break up the drama, which is one interaction after another in dull environments. It feels all too much like Nicholson was too faithful in bringing his stageplay to the screen. While his screenplays (including 2000’s Gladiator) continue to earn him accolades, this is his first directorial feature since Firelight in 1997, and it shows.

Fortunately, he’s got Bening, Nighy, and Connor to pick up the slack. Grace is loud, aggressive and needy, a totally imperfect match for the stoic and reserved Edward. Connor is somewhere in the middle; he’s got a touch of his Dad’s hermit-like attitude, which clashes with the other part of him, the need to have his love validated, which he gets from Mom. Bening is, of course, the highlight here. The multi-time Oscar nominee is fantastic as Grace goes from being oblivious to the state of her marriage, to the shock of having lost it. Her means of coping involves a lot of indulgent pettiness, like naming her new dog “Eddie”, which could make Grace unlikable if played by a less-skilled actress. Nighy walks a fine balance, as well. He brings subtlety to a character who could be perceived as cowardly in the wrong hands, but we come to understand he’s probably always been who he is and Grace simply failed to notice.

Hope Gap never makes a case for itself as a film, and perhaps it would have been better off remaining on the stage. If Nicholson does decide to bring it back, here’s hoping he gives Bening and Nighy a call.