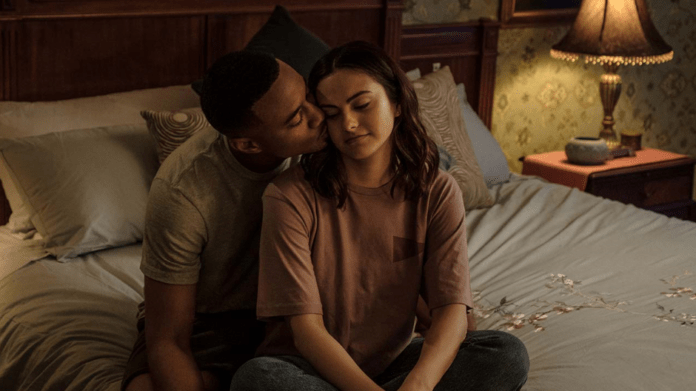 Netflix’s newest “thriller” Dangerous Lies follows Katie (Camila Mendes) and Adam (Jessie T. Usher) – a couple in a financial bind. Katie has been working nights at a Chicago diner trying to make ends meet while Adam is in school. Unfortunately, the waitressing job isn’t enough as the bills keep piling up. One fateful night while Katie and Adam are preoccupied in their car, a robbery is taking place. Ignoring Katie’s pleas, Adam intervenes and subdues the robber. Unbeknownst to them, this action would set in motion a series of events that would change their lives forever.

Fours month later and Katie is now working as a caretake for a nice older man named Leonard (Elliott Gould). During their time together, Leonard and Katie have become extremely close. Katie confides in Leonard about her monetary issues. Leonard immediately wants to give her money, but Katie refuses instead convincing Leonard to hire Adam as a landscaper. At almost that same moment, a sleazy realtor named Mickey Hayden (Cam Gigandet) stops by the house. Katie insists that the house isn’t for sale, but Mickey doesn’t seem to take a hint. Then just as awkwardly and aggressively as Mickey comes, he leaves, but it’s clear he’ll be back. 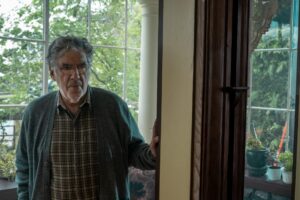 All is going well until Katie comes to Leonard’s house one morning and finds him dead in the attic. Detective Chesler (Sasha Alexander) is investigating the case, but doesn’t seem to suspect any foul play. Julia Kim (Jamie Chung), Leonard’s attorney, approaches Katie and Adam out of the blue. It turns out that Leonard has left all his possessions to Katie. Immediately Katie and Adam move into the house and keep it off the market – much to Mickey’s dismay. Adam seems to be adjusting a little too well to their new lavish lifestyle. As money and greed begin clouding their judgement, it becomes clear that Adam and Katie aren’t the only ones hoping to benefit from Leonard’s death.

If you’re thinking – wow, that sounds a lot like Knives Out – you’re not the only one. However, while it may sound like Knives Out, Dangerous Lies is not close to the same quality. There are multiple times during the film that I was left scratching my head, dumbfounded by the thought processes I was witnessing. Yes, the characters in thrillers typically make boneheaded decisions leaving the audience moaning and even screaming at the screen, but this was worse. Not only were the decisions and actions absurd, somehow they’d just be left out the rest of the narrative. 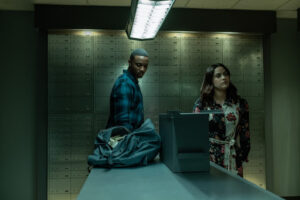 Director Michael Scott tries to mix things up with some unique camera angles and twists. Some of the camera angles work while others make it near impossible to see what is going on. Angles and music are powerful tools to build up suspense in a thriller, but Dangerous Lies fails to capitalize on either. While a twist or two ends up hitting, it is too little too late.

That being said, Dangerous Lies did have some things going for it – most notably Mendes and Usher delivering admirable performances. On top of that, Dangerous Lies did not drag on and was relatively entertaining throughout. Even the times where it goes completely off the rails, Dangerous Lies had a level of amusement to it. There is something to be said about a film that can keep the audience entertained – in some ways that is a success in and of itself. If you’re looking for a film that borders on absurd, then turn your brain off and check out Dangerous Lies this weekend, but you won’t be missing too much if you pass.