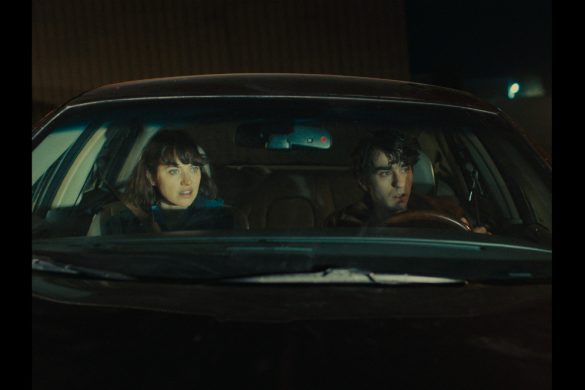 It’s a short walk from the highs of over-the-counter allergy meds to the dangerous world of drug dealers and criminals in Joey Klein’s mildly affecting but unfocused drama, Castle in the Ground.  Of films that probably aren’t going to be high on anybody’s wishlist to watch while under strict shelter-in-place orders, a sad, grim story of terminal illness and opioid addiction ranks high on the list. Although the connection forged by stars Alex Wolff and the always-excellent Imogen Poots nearly make this worth the effort until Klein goes off on a weird thriller tangent.

The opioid crisis of Sudbury, Ontario is the centerpiece of Castle in the Ground, plunging us into a dark, menacing world of violence and self-destruction. In that, Klein isn’t attempting anything we haven’t seen in many films before, only less convincing in this case. Far better are the relationships between characters, all stricken with their own forms of disease or addiction that cause them to take irrational acts.

Wolff adds to his growing list of morose characters (Jumanji being an exception) as 19-year-old Henry, who has stayed behind from college to care for his terminally-ill mother Rebecca (Neve Campbell, excellent in a brief role). The bond between them is tight, but you can sense her pushing him away as the end nears, and the pain of that hits him hard. It’s also what drives him to do anything and everything that she needs; picking up her prescriptions, grinding her pain medications (thus putting him in close proximity to addictive meds), and distributing them to her whenever she asks. Henry’s sadness is all-consuming, driving away his girlfriend, and leaving him in a very dark place when he’s suddenly left alone.

Klein teases the subtly manipulative hold Rebecca had over her son, and when she’s gone, that feeling he has of needing to help someone doesn’t just go away. Enter Ana (Poots), the loud, hard-partying neighbor from across the hall, who is there trying to overcome, quite unsuccessfully, an opioid addiction. Men shuffle in and out of her place, all looking just as strung-out as she does. When the pharmacist stops filling her prescriptions, she begins to lean on the eager Henry, who has begun dosing himself to ease the pain of his mother’s death. The transference of his attention and his devotion symbolized by giving Ana his mother’s phone to use.

Ana’s manipulations are more overt, scoring pretty much whatever she wants from Henry. At the same time, she drags him deeper into the shady world she’s quite at-home in. After a violent act by a masked assailant ends with a lucrative bag of pills stolen, Henry finds himself unwilling to escape from Ana’s orbit.

Klein nourishes the tender relationship between mother and son in the early going, with Campbell and Wolff showing how difficult it can be to protect the people you love when tragedy is imminent. Just as good is the symbiotic nature of Henry and Ana’s “friendship”, his need to care for someone crossing with her sly ability to use up others. But she’s also clearly lonely, as is Henry, so there’s the groundwork for something more tangible if only they could escape from the hold opioids has over them both.

Klein explores the many sides to these relationships through the use of blurred lighting and shadowy reflections, joined by a moody, atmospheric score by Chris Hyson that adds an ominous edge. Unfortunately, the movie is considerably less believable as Klein tumbles down into psychological-thriller territory, removing us from the grief and hurt that has bound Henry and Ana together. It comes across as a director in search of someplace for an aimless story to go, when a continued trust in his characters would’ve been enough. Their erratic journey to either recovery or doom is what Castle in the Ground should’ve kept front of mind.