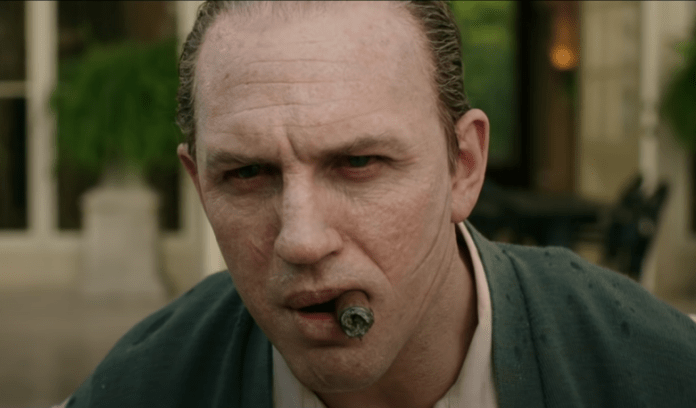 The legendary mobster Al Capone sees his legacy covered in piss and sh*t in Josh Trank’s bizarre, fascinating psycho-drama Capone. Formerly titled Fonzo, the film features a ferocious performance by Tom Hardy, one that finds him mumbling his way through virtually every line of dialogue like Bane with a mouthful of Jell-O pudding. But his attitude remains, and drives this nonsensical fever dream set in the final year of the decrepit mobster’s life.

If you go into Capone thinking it’ll be a gangster movie, you’ll leave sorely disappointed.  Actually, you might leave disappointed, anyway. Think Martin Scorsese’s The Irishman taken to the extreme, with little of the pathos which drove that mob drama. There’s very little of anything related to Al Capone that drives Trank’s movie, which explains why it never comes together to form much of a narrative, just a collection of twisted interludes connected by bowel movements and fainting spells.

After doing an 11-year bid in a federal penitentiary, Capone is left a broken man, rotting inside and out. Dementia racks his brain while syphilis destroys his physical form, leaving a shell of his former, imposing self. He’s in a state of confusion most of the time, physically and verbally assaulting his wife (Linda Cardellini, thankless role) in the worst of it, playing joyfully with kids at moments of lucidity. Somewhere in the middle of this, he’s also trying to recall the location of $10M he stashed away and can no longer find. It’s a mystery that, ultimately, amounts to very little.

Capone is very tough to endure, because there’s zero insight into the infamous gangster. Hardy overpowers his co-stars at every turn, growling through scenes and, as is often the case with him, acting as if he read a totally different script than everybody else who are busy playing it straight.  When we look back at Hardy’s career, it’s a performance that will sit alongside Venom for sheer peculiarity.  Nobody other than Hardy or maybe Nic Cage could pull-off a demented Al Capone blasting a golden Tommy Gunn will chomping on a carrot cigar.  That’s a real thing that happens.

While Hardy’s psychotic portrayal is compelling and worth the price of admission, much of Capone is sloppy and pretty dull. Josh Trank is a director I’ve always rooted for, and still think has a long and successful career ahead of him. Chronicle is one of the best debut films I’ve ever seen, and Fantastic Four had interesting ideas that didn’t pan out. It’s amazing how much ink has been spilled about him for a guy who has only made three features. Personal issues aside, the guy is talented and Capone shows it in spurts. A surreal jazz number with Capone and Louis Armstrong is evocative of the hazy nightclub scene of the era, so much that it would’ve been fun to luxuriate in that time for a while longer. But Trank is also messy when moving between reality and Capone’s breaks from it. Characters, some real some imagined, slip in and out confusingly with little explanation and even less impact.

I’m not sure who Capone is designed to serve, but certainly, it’s not meant for general audience consumption. It wouldn’t be fair to try and read Trank’s mind on why he decided this was the Al Capone story he wanted to tell, although I’m sure a thousand thinkpieces will be written to try and explain his thought process. What audiences will take away isn’t anything about the subject himself, and that’s a shame. They’ll simply remember it as another off-the-wall entry in Hardy’s growing filmography.