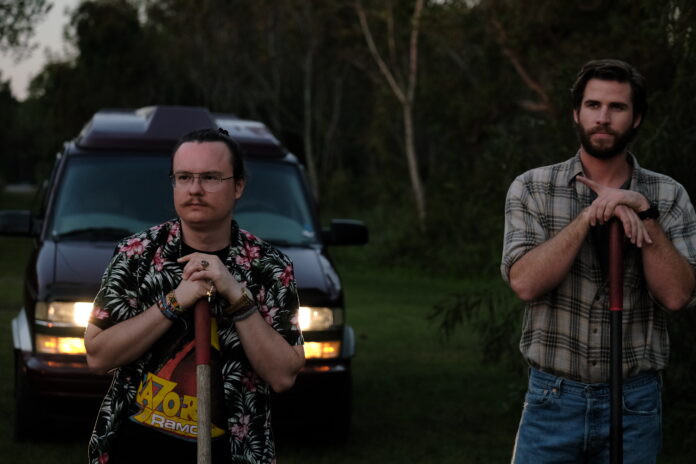 Drugs. Witty one-liners. John Malkovich. Plenty of Violence. The new film, Arkansas seems to truly have it all. Based on the pulp fiction novel by John Brandon, Arkansas examines the greed and violence that comes with being a part of the “Dixie Mafia.” First time director and known character actor Clark Duke teamed up with  Andrew Boonkrong to write this Southern neo-noir with a sense of humor. However, it’s a joke that goes on way too long.

Quickly rising through the ranks of a prominent Southern drug organization, Kyle (Liam Hemsworth) and his partner Swin (Duke) soon find themselves in over their heads with their organization after a series of unfortunate events leaves them without their boss (John Malkovich). Not sure what to do next, the pair tries to continue business as usual before their mysterious boss, Frog (Vince Vaughn) finds out.

Divided into chapters, the piece often feels like a series of vignettes rather than one cohesive story. Duke and Boonkrong pack a lot of the pulp fiction novel into the narrative that doesn’t need to be there. So much screen time is spent on Frog’s backstory and not enough on Kyle’s. While Duke clearly wants us to walk away feeling the ambiguity of man’s ability to appear all good or evil, the lack of backstory for Hemsworth’s character leaves little to sympathize with.

Arkansas wanders aimlessly, its first 45 minutes feeling more like two hours. You don’t really know where the film is going for the first 75% of the runtime. Though the dynamic between Kyle and Swin is endearing and Malkovich is fun to watch, it’s not enough to keep the film’s momentum.

Luckily, witty quips and a vibrant soundtrack provide moments of reprieve. An entire repertoire of Southern rock and country classics like “The Night They Drove Old Dixie Down” and “A Country Boy Can Survive,” are covered exclusively by psychedelic rock staples The Flaming Lips. Easily one of the best soundtracks of the year so far, the music propels the film forward and sometimes into music video territory, though that doesn’t hinder the film.

Despite a very gallant effort, Duke fails to capture the intensity of the pulp fiction novel, falling into the trap an over-eager first-time director. There are some very palatable nuggets within this behemoth of a film, however fundamental flaws within the story’s structure and pacing fail to make the journey through Arkansas worth it.

You can watch Arkansas on-demand and most streaming platforms.