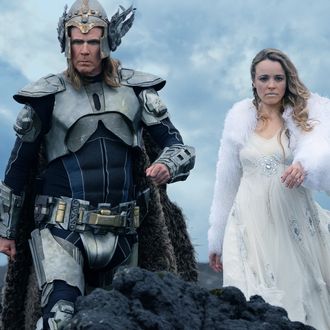 Due to the coronavirus outbreak, the annual Eurovision singing competition was canceled, leaving the international community without one of its most popular, and strangest, events. But don’t worry, because Netflix is here to fill the void with their upcoming musical comedy, Eurovision Song Contest: The Story of Fire Saga, and if that sounds like a dumb, bombastic title only Will Ferrell could’ve thought up, well…you aren’t wrong.

Netflix has dropped the first look at the Eurovision film, and it’s actually a music video of Ferrell and co-star Rachel McAdams going full-on Game of Thrones, or really cheap Thor: the Dark World, in performing the song “Volcano Man”.  Believe it or not, this wildly over-the-top performance isn’t that out of step for the competition. While it has featured the likes of Celine Dion and ABBA, it also has some of the weirdest groups from all over the globe doing songs that make zero sense. Want a Spanish Elvis with a vibrator guitar? Check. Or a Finnish metal band performing Christian rock while dressed as zombies? You got it.

SYNOPSIS: When aspiring musicians Lars and Sigrit are given the opportunity of a lifetime to represent their country at the world’s biggest song competition, they finally have a chance to prove that any dream worth having is a dream worth fighting for.

The #Eurovision dream is very much alive. Starring Will Ferrell and Rachel McAdams as members of the Icelandic band Fire Saga, check out #VolcanoMan, a new song from the upcoming movie Eurovision Song Contest: The Story of Fire Saga, coming soon to Netflix. pic.twitter.com/jIK7ccL3Ju