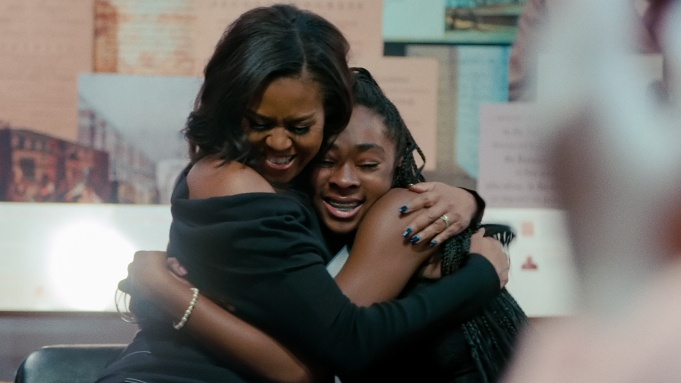 There’s a reason so many people are clamoring to see Michelle Obama get back into politics, possibly as a VP choice. While that is unlikely to ever happen, she remains a beloved figure who used her time as First Lady to champion causes that help those who need it most. And she did it in a way that respects everyone, even those who may oppose her ideologically. That’s why this new clip from the upcoming documentary Becoming is so moving, because it serves as a reminder of the humanity missing from the political discussion today.

The Netflix doc Becoming follows Michelle Obama as she tries to settle back into normal life after she and husband President Barack Obama left the White House. In this scene, all we see is Michelle talking with a group of young girls, many of them young women of color. We’ve seen Michelle’s life depicted in movies before, including a very good one in Southside with You, but this will be a look at who she really is like we’ve never been privy to before.

The Obamas have been working with Netflix extensively of late, producing a pair of acclaimed documentaries including Oscar winner American Factory. This would appear to cement that relationship even further.

Directed by Nadia Hallgren, Becoming hits Netflix on May 6th.

SYNOPSIS: BECOMING is an intimate look into the life of former First Lady Michelle Obama during a moment of profound change, not only for her personally but for the country she and her husband served over eight impactful years in the White House. The film offers a rare and up-close look at her life, taking viewers behind the scenes as she embarks on a 34-city tour that highlights the power of community to bridge our divides and the spirit of connection that comes when we openly and honestly share our stories.