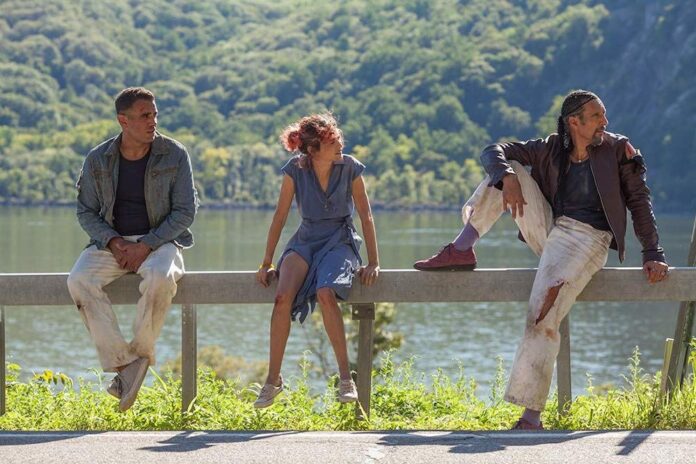 Turtorro turns to an unusual source in his quest to reimagine, perhaps revive, the character of Jesus Quintana. The Jesus Rolls is very loosely based on Bertrand Blier’s 1974 French sexual deviant comedy Les Valseuses (aka Going Places), and the amorous escapades and outright horniness remain pretty much intact. A road movie but one without much of a destination, the film stutters and stalls with occasional pit stops for random hookups and petty crimes, but little that says Jesus Quintana is deserving of his own movie.

That feeling of pointlessness pervades every moment of this film, and it will only be worse if you hold The Big Lebowski in really high esteem. The story, such as it is, starts out as a reclamation project. Jesus, who has been serving time in prison for public indecency (his pedophilia crimes mentioned in ‘Lebowski‘ easily brushed aside as a “misunderstanding”), he’s released from jail by a prison warden (Christopher Walken, cheesy in his brief appearance) who is just sad to see his star bowler leave.  Jesus is picked up by his best bud Peter (Bobby Cannavale, sad), a fellow con and petty criminal, and within moments they are stealing cars up and down the road. They soon encounter Jesus’ promiscuous friend Marie, played by Audrey Tautou as a sortof sexed-up version of Amelie.

The guys treat Marie like shit, but that goes for pretty much every female who crosses their path. They bang Marie at will, and she’s all gung-ho for it, even taking them at the same time. But alas, she has gone her entire life without having an orgasm. If there’s a goal to be found in this entire, meaningless journey it’s for Marie to finally cum, and the two guys plow their way to try and achieve it. That’s when they aren’t abandoning her at the scene of crimes…repeatedly. Or ditching her to pay the check after being spooked by a couple of cops. Turturro’s attempts to paint women as sexually-liberated are confused and pathetic, but in another case it’s downright disgusting.

That involves the arrival of Susan Sarandon, in a thankless role as a recent parolee with nowhere to go. The guys, who have ditched Marie at this point, stalk the women’s prison for an easy lay. Sarandon’s character takes them up on the offer after they wine and dine her for a while. Now, some might appreciate the incendiary quality to Turturro and Cannavale running a train on Sarandon, but there’s nothing really interesting about it. Nor is it played for laughs. On the contrary, it’s quite a somber moment, punctuated by a violent act that is shocking but empty. That Turturro thinks this is a point of redemption for Jesus only goes to show how badly he’s grasping to give his character meaning.

But there aren’t enough celebrity appearances to spare that can fix The Jesus Rolls. Pete Davidson shows up to play a big-dicked virgin who tickles Marie’s fancy (and other things), plus Jon Hamm is a running-gag as a boisterous masseuse. They’re joined by guest stars J. B. Smoove, Tim Blake Nelson, Gloria Reuben, and Sônia Braga who undoubtedly leaped at the chance to be part of the ‘Lebowski‘ mythos. It’s a wonder if they still feel that way.

There is bowling, or at least there’s one scene on the lanes, and it comes across as perfunctory. Turturro can’t wait to get away from it, and quickly has it devolve into disturbing dances and attempted debauchery. His most famous catchphrase, “Nobody fucks with the Jesus”, pops up like someone reminding you “Hey, remember you liked him in The Big Lebowski”? Yeah, but he should’ve stayed there.

It’s clear that Turturro has an affection for Jesus Quintana, and wanted to give the purple-clad bowler a new life and a new, defining arc. While the wandering nature of the plot is intentional, and charming in a shaggy sort of way, Jesus is less interesting now with an entire movie all to himself.  By the time Turturro gets to the limp final frame of The Jesus Rolls, he seems to realize it, too. He was a one-joke character in a classic movie. He definitely should’ve stayed that way. Some characters are best left on the margins where they can have a moment to shine, to bowl that perfect game, rather than go too far and end up in the gutterball lane.