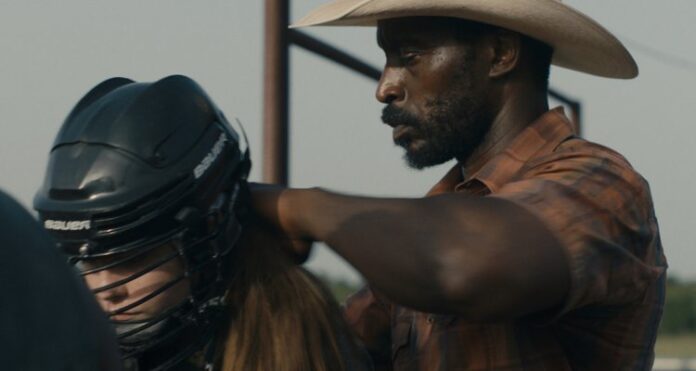 “Get up fast when you fall”, says Abe Turner (Rob Morgan) in Bull, Annie Silverstein’s striking, sensitive look at masculinity and disenfranchisement in the black rodeo community.  A former bull rider-turned rodeo clown, Abe’s words serve as easy metaphor for life, one echoed in every male-driven sports movie ever made. Take a punch, get back up. While Silverstein doesn’t seek to elevate simple conventions such as this, she more than makes up for it through her depiction of a rarely-seen corner of black life.

You might not think that’s what Bull is, at least not in the beginning where it better resembles Kids or Thirteen. That’s when we’re introduced to 14-year-old Krystal (terrific newcomer Amber Havard), a hellion too much for her poor, ailing grandmother to handle. Krystal seems well on the way to joining her mother in prison; disobeying her grandmother’s instructions, taking her sister out where she doesn’t belong, hanging out with the local ruffians who throw the N-word around casually. When Krystal breaks into her neighbor Abe’s home to throw a drug and alcohol-fueled party, that’s when she gets an unexpected shot at redemption.

The surly Abe is in need of something, too. When Krystal is caught by the police, Abe grants her leniency, but only if she’ll clean his broken-down house and fix his chicken coop, the one her dog keeps getting into. While he’s initially dismissive of the poverty-stricken girl, common ground is forged in two things: love of rodeo, and their mutually-impoverished situations. Introducing her to the African-Amerian rodeo circuit in rural Texas, Abe becomes a pill-popping, hard-drinking mentor. His battered-and-bruised body a sign of his deep commitment to the profession he loves, but also the way he’s been discarded all of his life.

In a way, Abe’s story mirrors that of Mickey Rourke in The Wrestler. He’s a man who has known only one thing all of his life, and that’s how to use his body in the rodeo to make a living. Once a renowned rider, he now risks further harm (and takes his share of punishment) as a rodeo clown. It’s the only thing he knows, but more importantly, it’s the only thing of value he feels he has to offer. But unlike Darren Aronofsky’s film, Bull can’t  ignore the marginalization of blacks within their chosen profession, and in the cowboy culture. Abe’s long-storied career in the majors means little when all is said and done, and he finds refuge in the only places he can, among his own people who have been pushed to the margins. “Don’t get more American than that”, Abe tells another black cowboy in passing, as if rodeo reminds him that he belongs here.

The crisis Abe faces is mirrored in Chloe Zhao’s astounding film, The Rider, which also challenges our notions of masculinity in the rodeo. Silverstein doesn’t elevate the discussion, just looks at it through the lens of race and the opportunities it affords. Abe doesn’t have any options truly left to him. Meanwhile, Krystal’s drawn to bull-riding like a moth to flame, but the dangerous pull of drug-dealing and crime is always present.

Avoiding the annoying possibility of a “Magical Negro” narrative, one where a black character’s only purpose is to be catalyst to a white person’s emotional awakening, Silverstein keeps her focus evenly split and the central relationship free of cloying cliches. The oil and water nature of Abe and Krystal’s friendship is nothing new, but it feels authentically bumpy. It helps to have renowned character actor Rob Morgan in a rare lead performance. The Stranger Things/Mudbound actor exudes toughness, hardship, and pain at every turn; even when Abe softens it’s only by the barest crack. Amber Havard is a true find, her tough-as-nails performance gives as much she takes from Morgan, and then some.

Wisely, Silverstein doesn’t paint bull-riding as an easy pathway to escape for either Abe or Krystal. For people such as them, dreams are hard-won and rarely at that. While Bull‘s ambiguous ending is meant to drive that point home, it drags an already-subdued tone down even further. Not that we want a happy-go-lucky version, but there’s inspiration in the way they strap in and enter the arena, time and time again, knowing it can only end in pain. But those brief seconds in the ring are the closest thing to freedom, the closest thing to hope, they might ever know.