Behind You follows Sisters Olivia (Addy Miller) and Claire (Elizabeth Birkner) who have had their world turned upside down. Their mother has just died, and their father is unreachable, somewhere out of the country. Naturally, a friend of their mother’s Camilla (Aimee-Lynn Chadwick) thinks it is best for them to be with family. Camilla brings the girls to live with their estranged aunt Beth (Jan Broberg) and from the jump things seem off.

Beth doesn’t even come out to greet the girls, her friend Charles (Philip Brodie) does so instead. When Beth does finally meet them, her first thought is to convince Camilla to take them instead. Unfortunately for everyone involved, Camilla refuses and the sisters must stay. Beth gives them a tour of the house, complete with the oft-seen locked basement door that of course immediately peaks Claire’s interest.

What the girls don’t know, and what the audience is privy to, is some of the history of the house. When Beth was a child, a malevolent entity attacked Beth’s sister Angela through a mirror. In what some would say is an appropriate reaction, Beth has either removed or covered the mirrors throughout the house. 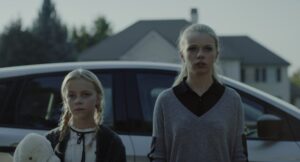 Olivia stumbles upon this discovery by noticing some paper covering up a mirror in a bathroom. As she begins to tear the paper away, the evil within the house reveals itself. Luckily for Olivia, it is only interested in Claire and she leaves the room unharmed. Claire is tricked into going in the basement by the spirit impersonating her faithful stuffed rabbit. In the basement she finds mirrors covered with sheets and lit up by mysterious red backlighting. A candle lights itself, which is never a good sign, but somehow Claire doesn’t seem to mind. The spirit continues to manipulate Claire until she gives it the opportunity to cross into our world and wreak havoc.

The best parts of Behind You are the eerie pacing and slow, creepy stylistic elements. Andrew Mecham and Matthew Whedon, who both wrote and directed the film, did a great job building up suspense and a feeling of dread. Through a mix of spine-chilling music and deafening silence – where every creak and noise is magnified – to camera angles that leave the audience holding it’s breath as the camera slowly pans across a room, there is a lot to like.

The problem is, most of these are in the first half. The second half of the film replaces the ominous tone and masterful buildup with brashness and in-your-face jump scares and violence. Subtly can be king, and more of it in the second half of Behind You would have only been a benefit. It seems like a switch is flipped and suddenly we’re left with a completely different film in front of us.

Even with some standout moments in the first half, when the dust settles Behind You is just not memorable enough. It has a bunch of cliché horror elements – creepy house with a mysterious past, demons, mirrors being gateways for evil, and that evil focusing on one child. The problem is we’ve seen these time and time again and Behind You does not add enough to the mix to separate it from its predecessors. You can go ahead and leave Behind You covered with a sheet and locked in the basement; you aren’t missing much.

‘Behind You’ Trailer: New Horror Will Make You Feel Worse About Staying Indoors