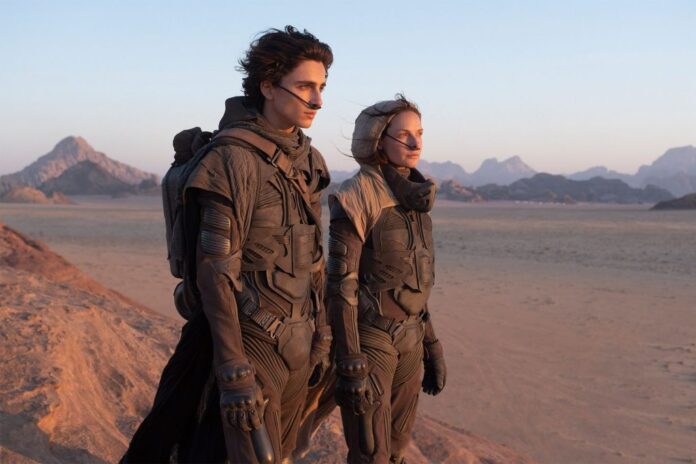 Frank Herbert’s Dune novels are beloved in sci-fi circles for their massive scope, which is why adaptations of the material has always proven difficult. Multiple filmmakers tried to corral the gigantic story before David Lynch came along and delivered his problematic take on it in 1984. A pair of TV miniseries in the early 2000s were fairly well-received for condensing multiple books. But the point seems to be that trying to tell Dune in a single movie is foolish, and director Denis Villeneuve is having none of that with upcoming film.

After debuting the first image from Dune yesterday, Vanity Fair is back with multiple photos of the cast. We see Josh Brolin as weapons master Gurney Halleck, a mentor to lead character Paul Atreides played by Timothee  Chalamet. Rebecca Ferguson is Lady Jessica, Paul’s mother and concubine to Duke Leto Atreides, played by Oscar Isaac. Zendaya is seen as Chani, Paul’s love interest, Jason Momoa as swordmaster with the awesome Duncan Idaho, and Sharon Duncan-Brewster as Liet-Kynes.

Speaking about the intimidating scale of Dune, Villeneuve says he wouldn’t have even bothered if Warner Bros. had refused to give him a two-movie commitment…

“I would not agree to make this adaptation of the book with one single movie. The world is too complex. It’s a world that takes its power in details.”

“It’s a book that tackles politics, religion, ecology, spirituality—and with a lot of characters. I think that’s why it’s so difficult. Honestly, it’s by far the most difficult thing I’ve done in my life.”

“No matter what you believe, Earth is changing, and we will have to adapt,” he explained. “That’s why I think that ‘Dune,’ this book, was written in the 20th century. It was a distant portrait of the reality of the oil and the capitalism and the exploitation—the overexploitation—of Earth. Today, things are just worse. It’s a coming-of-age story, but also a call for action for the youth.”

To succeed, Dune, which opens on December 18th, will have to attract more than just the hardcore sci-fi base. That’s something Villeneuve’s Blade Runner 2049 failed to do.