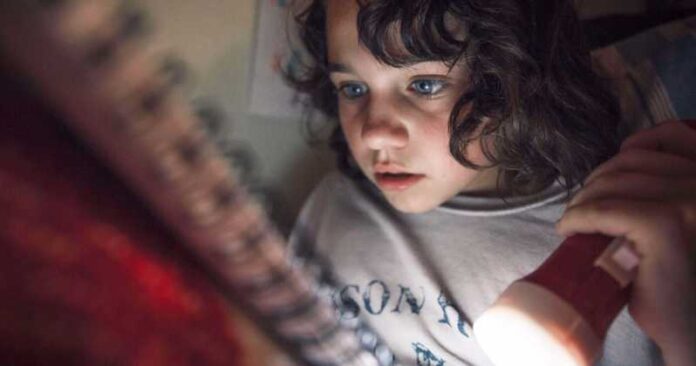 Few filmmakers have made a splash quite like Benh Zeitlin did with his fantastical 2012 debut, Beasts of the Southern Wild. As someone who was here in Park City at that time, I can tell you the buzz was like no other that I’ve experienced. The film earned Zeitlin a richly-deserved Oscar nomination for Best Director, and a Best Actress for his young star Quvenzhane Wallis, but there was no quick followup on that success. He didn’t do like other rising star indie filmmakers and jump to a studio blockbuster. Instead, Zeitlin made us wait. And wait. And wait. And that wait is over with Wendy, which shows that Zeitlin not only still has a special hand for the invention of wildly imaginative, magical fantasy worlds, but that he needs to be hired the next time someone decides to remake a fairy tale classic.

Zeitlin reimagines J.M. Barrie’s classic Peter Pan into a Southern fable about childhood innocence gained and lost, the fear of growing up, and the love between siblings. It begins in a gorgeous, nostalgic flashback that will leave you breathless. A rundown old diner, run by a young-ish woman serving up bacon and eggs to a crowd while her rambunctious, energetic kids cause a ruckus. One of those kids is her nephew Thomas  (Krzysztof Meyn), who at the suggestion his life is already mapped-out to be a toilet cleaner at the eating establishment, quickly grows angry and storms out. The diner, which also serves as a home to the owner and her three children, Wendy (Devin France), and twin brothers Douglas and James (Gage and Gavin Naquin), sits near a busy railroad. As Thomas lets loose his frustration, a train screams by, with a mysterious, shadowy child laughing on top of the car, beckoning for the boy to join him. Within a moment, while Wendy watches, Thomas vanishes.

Years later, the only signs Thomas ever existed are the “Missing” posters scattered around the diner. Wendy, Douglas, and James have moved on, but they are still a handful of trouble for their overworked mother. She had dreams of her own once, but now she lives only for her children. The perceptive Wendy sees the sadness in this, and it’s that night that sees the train return, with the same figure urging them to leave everything behind and join him. The sibling trio race to catch up, and before long they are face-to-face with Peter (Yashua Mack), who leads them to a rickety old boat, which then carries them to a far-off island, a Neverland if you will, with an angry volcano constantly spewing its protestations.The island itself is a wondrous character throughout Wendy, seemingly reacting to the beck and call of Peter. There is a connection, of course, between Peter and this place untouched by civilization. Vast jungle, mountainous ranges, and more provide ample room to frolic with reckless abandon. Soon, Wendy and her brothers are joined by other Lost Boys loyal to Peter, and also reunite with Thomas who hasn’t aged a single day. The playful montages recall Where the Wild Things Are, and take up an overlong portion of the film, but it’s all for a purpose.

Wendy eventually takes a much darker turn. While the kids are forever young, the island does have rules which must be obeyed. Lose that spark of innocence, stop believing even for a moment, and age will catch up to you quickly. Can it be stopped? Can you stop being an adult once you’ve put being a kid into the past? This is something Zeitlin and his co-writer/sister Eliza Zeitlin grapple with as the story takes a tragic turn, weaving in elements of Barrie’s original story. Those who grow old are not only banished from the club by Peter, they live in exile in a faraway desert, with nothing to do but plot a way to reverse their conditions.

Zeitlin keeps Wendy planted with one foot in reality, the other decidedly not. It’s hard to grasp what the rules are that Zeitlin is playing by. This world he’s crafted is not without real-world violence and hardship, but what’s up with the giant glowing fish that lurks beneath the sea? The uncertainty is exhilarating and keeps you on edge wondering how far Zeitlin is willing to go. Turns out, it’s pretty far, although it doesn’t stop him from a sappy, sing-songy finale that wraps up a bit too comfortable.

As the title character, Devin France is a revelation. The wide-eyed 10-year-old shows a maturity well beyond her year, matched only by a passion that will have you believing in her with all of your heart. The film’s biggest drawback is Yashua Mack as Peter, who is simply too young for the role. Zeitlin was clearly looking for an untamed performance from the 5-year-old actor, which he definitely gets, but he’s unable to show the qualities to make us believe any of these children would charge into unknown danger by his side.

I must confess to fearing Zeitlin couldn’t replicate what he had done with Beasts of the Southern Wild, and in failing to do it the Sundance audience would be unforgiving. But Zeitlin hasn’t lost that magic touch. Without the benefit of massive budgets or huge stars, he’s capable of transporting us to places that spark our imaginations. Aided by a sublime score by composer Dan Romer, Wendy is a masterful work of art that shows how to use a classic story to create something bold and unique.