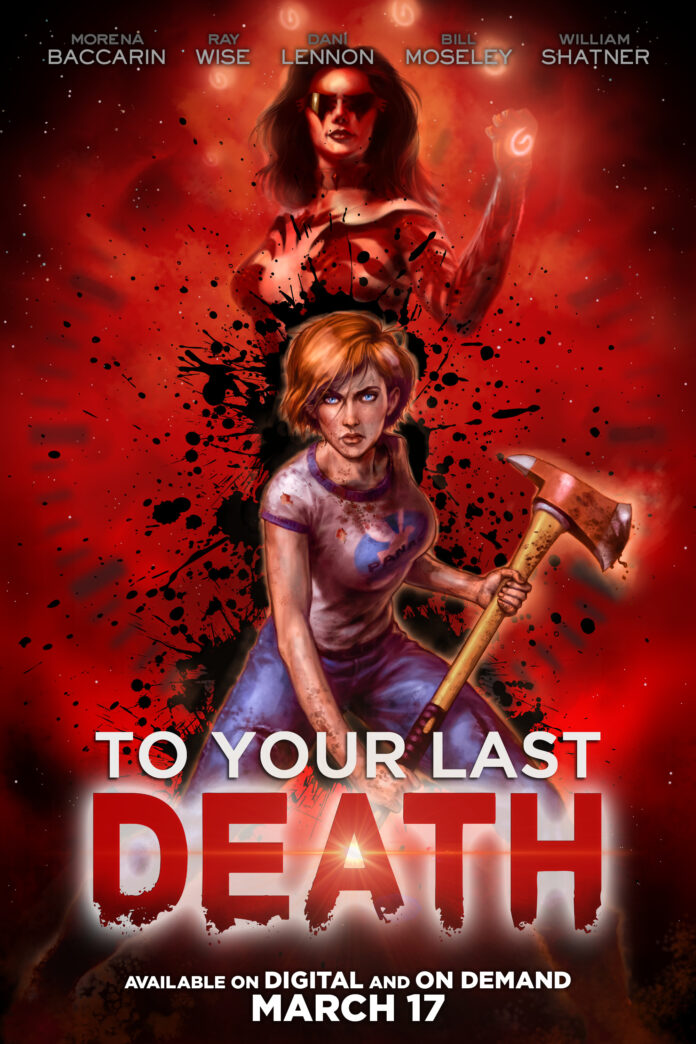 We begin our story with an ominous voiceover from an unseen Overseer (William Shatner). Cut to Miriam as she exits an office building, sirens blaring completely covered in blood and carrying an axe. Do I have your attention? It certainly grabbed mine at first.

Following her bloody ordeal our protagonist is questioned by police who think that she is to blame for the deaths of her siblings which she vehemently denies. When left alone by the investigators to “re-think” her story Miriam is visited by a mysterious Gamemaster (Morena Baccarin) and offered a chance to re-do the previous night and save her siblings. Will she rewind 24 hours and except the offer? Or, is this all in Miriam’s head and just her mind’s way of coping with the traumatic events of the previous evening? 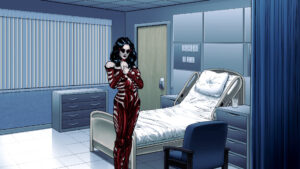 Flashing back to fill us in on what led us to this grisly opening scene we find Miriam arriving at her office to a phone call. Her world begins to collapse around her as she finds out that she has lost her last and largest donor. Adding insult to injury she also receives word that shes been invited to her estranged father’s office to talk. Reluctantly accepting she arrives at his office later that evening. Standing in the lobby she is greeted by her two brothers, Ethan (Damien C. Haas) and Collin (Benjamin Siemon) as well as her sister Kelsy (Florance Hartigan) who are all just as confused as to why they summoned to their estranged father’s place of business. The elevator dings and the group is escorted to Cyrus DeKalb’s (Ray Wise) office. One by one Cyrus judges each sibling for their misdeeds, sentences them to death and promptly has them escorted off by his henchmen Pavel (Bill Moseley) to some unseen doom. 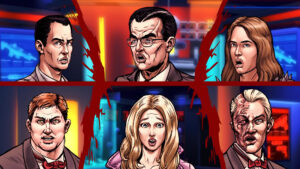 Now lets fast forward to where we all began. Back to the hospital, back to the Gamemaster and her offer. Not to spoil anything but Miriam excepts the offer and instantly we are transported back to Cyrus’s office building lobby. Miriam tries to warn her siblings who all subsequently brush her off and we begin this adventure again. Can Miriam fix the past and save the people she loves or will she fall to the ever-changing rules of the sadistic Gamemaster? 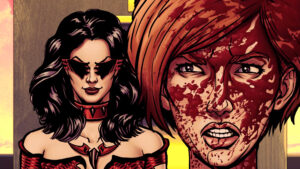 To Your Last Death is an animated horror film directed by Jason Axinn and filled with amazing voice talent. Part Belko Experiment, part Saw with a dash of Twilight Zone and Groundhog Day. This movie is claustrophobic, bloody and oddly confusing at times. This story and universe they are trying to build seems promising but for me it just missed the mark. It feels disjointed. There are so many flashbacks, flash-forwards and timeline rewinds that I felt like I should be taking notes. The animation style is not really my cup of tea either. It reminded me of early Archer and not in a good way. That being said please don’t let my opinion discourage you from giving this movie a shot. I’m sure there’s some redeeming qualities. I mean the deathtraps and gore were beautifully executed but that can only get you so far. I’ve said this before in previous reviews. There will always be a genre fan somewhere out there for everything. If you’re a fan of one of the properties I listed above then you absolutely might enjoy this movie. I mean obviously there are people that are going to dig it judging by the multiple awards this movie has racked up at various Horror Film Festivals throughout 2019 but sadly I am not one of them.

To Your Last Death will be available on digital and VOD March 17th.

‘The Good House’ Trailer: Sigourney Weaver And Kevin Kline Reunite For A Story Of Wine And Rekindled Romance