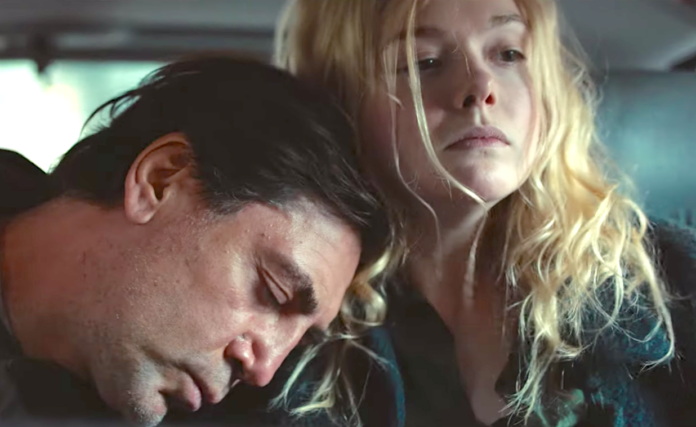 When the most compelling thing about Sally Potter’s stagnant melodrama The Roads Not Taken is figuring out how Elle Fanning could possibly be Javier Bardem’s daughter, you know something has gone terribly wrong. Potter’s unfortunate misfire is based on a deeply personal episode in her own life, but any intimate touches are lost in a dull, confusing narrative that makes the least possible use of its star-studded cast. This one is a drag from start to finish.

Bardem is mostly bedridden and virtually unintelligible as Leo, a writer left debilitated by a neurological condition. His existence is reduced to a crappy New York apartment where a maid cleans up after him, and phones his daughter Molly (Fanning) if problems arise. On this particular day, Leo hasn’t answered the doorbell, leading to a frantic Molly showing up on the scene. She was coming there any way to spend the day running errands with her father, and yeah, it’s as tedious as it sounds.

Molly and Leo’s slow-moving trek through the city is troubled from the start. Her childlike, obstinate father can’t perform even the simplest of tasks, and any outside stimuli either bounce off him or causes a fit of rage. One such case finds him receiving an accidental head wound, so the trip is interrupted by a stop at the hospital. There’s another stop at the dentist which doesn’t go well, and a completely unnecessary Costco run ends with security driving Leo’s face into the floor.

It’s unclear what Potter wants us to take from all of this. Molly is upset over the way people treat her father, but their reactions to him aren’t out of left field. She claims he can understand people, which makes his outright refusal to respond to basic instructions frustrating. Eventually, it even begins to wear on her, when the burden of caring for him threatens her so-called journalistic career. That aspect of Molly’s life is sorely underdeveloped, seen only in a series of one-sided, increasingly desperate phone calls.

The repetitiveness is broken up by a series of dry flashbacks to Leo’s past, representing unfollowed aspects of his life. A brief appearance by Molly’s mother (Laura Linney, sadly underutilized) clues us into the memories that keep him unhinged from reality. We see Leo in Mexico with his long-lost love Dolores (Salma Hayek), with whom he seems to share a fiery relationship. Then there’s a stint in Greece where he attempts to pick up a nubile young woman, perhaps to fill the void left by his estranged daughter.

The problem with these scenes is they don’t answer the only questions that truly matter. What caused Leo to become the invalid he is in the present? What were the cause of his estrangement from Molly and all of the women in his life? And why in the world doesn’t somebody get him the professional care he needs? The Roads Not Taken has no answers. Across 80-minutes that feel like 3-hours, we’re given little reason to care even if it did.