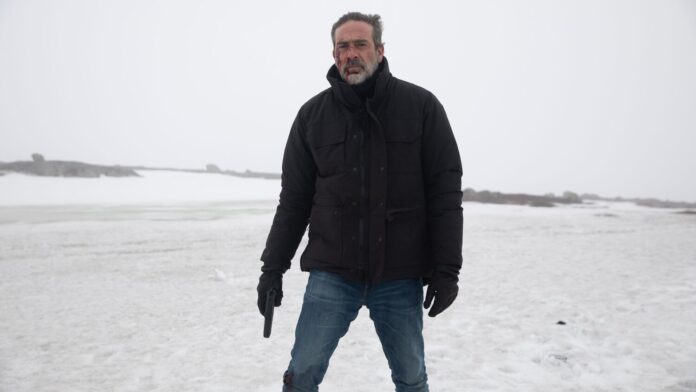 Jacob (Jeffrey Dean Morgan) and Valerie Kanon’s (Famke Janssen) worst nightmares have come true in the latest James Patterson adaption that he cowrote with Liza Marklund, The Postcard Killings (a slight variation from Patterson and Marklund’s title – The Postcard Killers). Kimberly (Maryam Grace), Jacob and Valerie’s daughter, and her husband are brutally murdered while on their honeymoon in London. On top of that, the crime seems to be part of a series of ruthless murders across Europe.

The victim’s bodies are arranged in a specific way, including mutilations and limbs placed to recreate famous works of art. Whoever is responsible for this has been going from city to city finding young married couples as their victims. When they arrive in a new city, they send (I bet you already know) a postcard to a local reporter days before they commit their heinous crimes, forewarning what is about to come. It is safe to say that whoever killed Kimberly made a bad choice murdering a New York police detective’s daughter. 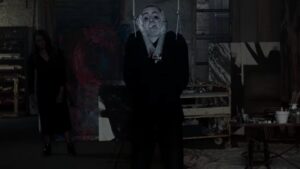 Jacob will stop at nothing to find who is responsible for this. While hunting down his daughter’s killer won’t bring her back, it will make sure that no one else must suffer the same fate. After the London police treat him as a civilian and get in his way, Jacob decides to take matters into his own hands. Jacob crosses paths with a Swedish journalist Dessie Leonard (Cush Jumbo). Dessie is one of the lucky recipients of the killer’s postcards. With Dessie’s help and the help of his stereotypical crime solving board, Jacob goes on a quest to stop any more killings from happening. 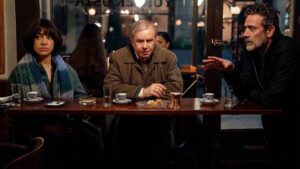 The concept of The Postcard Killings is an interesting one. It’s a cat-and-mouse game that we have seen many times before, but there is always room for another interesting serial killer flick to grace our screens. Unfortunately, The Postcard Killings is not interesting enough to set it apart. The film isn’t bad, but it isn’t good either. The twists are few and far between, and some of the illogical decisions literally leave you scratching your head. Even Morgan – who is solid for much of the film – struggles at times. In his defense, parts of the script did not give him any help in certain scenes.

The Postcard Killings seemed to squander a great premise. There is a lack of tension and suspense for most of the film, not a good sign for a thriller. The film’s weather and settings mirror Jacob’s state of being. We see a majority of the film cloaked in grays, shadows, and rain. Sad and slow melodic music, typically comprised of simple piano notes, match the dreary surroundings. There is a lack of energy throughout the film that is apparent early on. Director Danis Tanovic tries to mix in some interesting shots and flashbacks to spice things up, but it is too little too late. When the dust settles, The Postcard Killings is a disappointing “thriller” that did not live up to it’s potential.