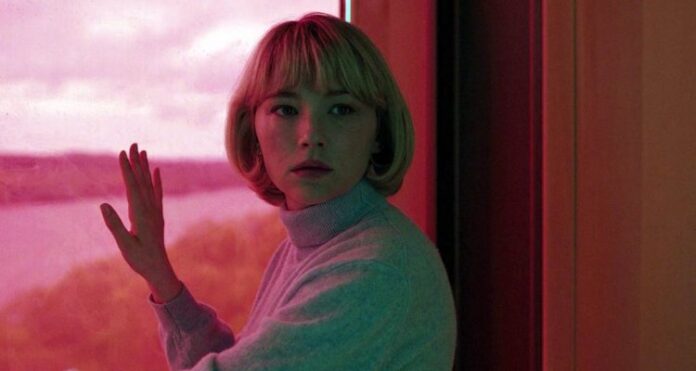 If you’ve never heard of Pica, the disorder which causes someone to ingest things that aren’t meant to be eaten, prepare to get a crash course. Swallow is the bold, breakthrough film by writer/director Carlo Mirabella-Davis, which takes this uniquely disgusting condition and frames it as metaphor of one entrapped housewife’s bid for freedom. Those with an easy gag reflex need not apply, but those with sterner stomachs are in for one of the strangest, and most compelling pro-feminist movies in recent years.

Featuring a dynamite performance by Haley Bennett, the provocatively-titled Swallow begins like an odd, surreal sort of fantasy, but it’s all just a means of lowering your guard. Bennett plays angelic, naive trophy wife Hunter, who lives on the shores of the Hudson in a beautiful glass house that might as well be a cage. She basically lives to serve her stock white collar douche of a husband (Austin Stowell), who gives her simple things to do like pick out the drapes, anything to keep her pretty little head occupied. She doesn’t have much else in her life, no friends, no company other than her equally-possessive, overtly-threatening in-laws (Elizabeth Marvel and David Rasche). So she wittles away the days playing games on her phone or dressing up in fancy dresses for no particular reason at all, other than to please her man. She’s such a wisp of a woman, one thinks she might simply float away if ever let off of her leash.

It’s learning of her pregnancy that triggers something within Hunter; a primal need to reclaim the body she has so willingly given over to her husband. So she finds an unusual way of doing it: by swallowing a little glass marble. It’s reluctant, at first, but soon she gives in. After that, she moves up to ingesting a thumbtack, then a battery, and worse until you wonder when she’s going to devour her IPhone whole. The ramifications physically are awful, and there’s plenty of scenes of Hunter clutched in pain or kneeling to the porcelain god, but the satisfaction she feels is just as potent. This compulsion, whatever it is, feels good, but there’s more to it than that.

Swallow isn’t so much about the objects Hunter drops down her throat, but the social forces that compel her to take such dire actions. The act of committing Pica is uncontrollable in one sense, but at least it’s her compulsion and not lorded over by someone else. For much of the movie we are with Hunter as she tries to cope with, then hide what she’s doing from others, always eager to maintain the facade of the prim and proper housewife. But these little slivers of freedom she’s carved out for herself are like light peeking into a darkened cave; Hunter wants more, and begins revealing more until the facade has to shatter.

Throughout, Bennett’s carefully-crafted portrayal of Hunter is convincing, enough that we are concnerned more about her than what weird thing she’ll eat next. Bennett has always been a star on the rise, and her role in The Girl On the Train shares quite a bit in common to this one, but in her first true lead she is captivating. If only the world constructed around her was quite as believable. It’s not a knock on Bennett’s supporting cast, but their characters barely reach above one-note villainy, with the possible exception of Marvel whose mother-in-law seems to recognize Hunter’s spiral intimately.

The means Hunter takes to express her dissatisfaction are extreme (she begins eating dirt, so yeah, extreme), but her situation is one that hasn’t evolved much since our ideas of the lonely 1950s housewife. Back then, women who dared want something more often saw themselves institutionalized, referred to as “hysterical”, and had their kids taken away. Hunter faces similar parallels, as the film eventually drops its flowery veil in favor of a more suspenseful glimpse into her past, and that’s when Mirabella-Davis courageously stakes out territory few filmmakers would’ve dared.

I just have to say, it’s refreshing to find a filmmaker who isn’t the least bit scared to put themselves out there, to have the courage of their convictions. Mirabella-Davis rattled us with Hunter’s strange food habits but it was all done in service of a larger point about body independence and trusting in women. Shifting gears, Swallow takes on a harrowing, urgent quality it simply didn’t have before, as Hunter takes charge of her life and confronts a past she had been trying to keep down, like bad food looking for a way out. There isn’t a simple end to Hunter’s story, but in the final scene Mirabella-Davis suggests any choice that leads towards autonomy should be easy to digest.