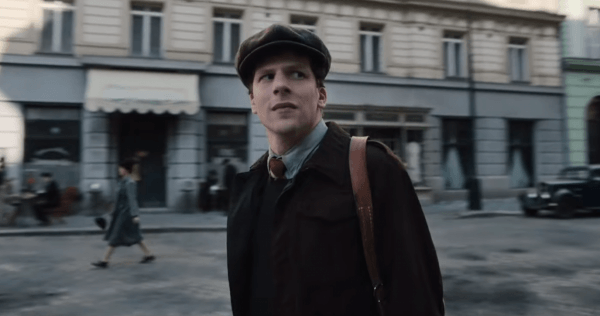 When people think of Marcel Mangel AKA Marcel Marceau, most people know about him as one of the most famous mimes in all of history, “Bip the Clown.” But little did we know that Marcel was an active participant in the French Resistance against the Nazi occupation during World War II. During the Holocaust, he helped liberate thousands of children from persecution and death and the hands of the Third Reich. Director/writer Jonathan Jakubowicz tries to shed light on Marcel Marceau’s origins in Resistance, which sort of plays as an origin story for such a fascinating individual. 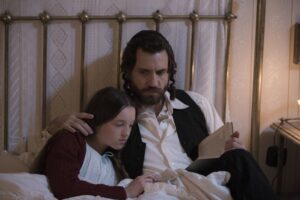 The film starts off in the middle of a home raid by Nazis searching for Jews in France. Édgar Ramírez plays a soon to be executed Jewish father trying to soothe his daughter (Bella Ramsey, who played Game of Thrones scene-stealer Lyanna Mormont) of things to come before he is whisked away to certain death. Shortly afterward, General Patton (Ed Harris) is speaking to American troops about a story of bravery, and then we get to meet Eisenberg’s Marcel Marceau. He’s trying to become a professional mime, much to the disappointment of his father, who just wants him to work at his butcher shop. While he’s just starting to get his feet wet in regards to acting, he’s a hit with a group of young Jewish orphans after spending time with his cousin who is helping them escape a soon to be occupied France. Soon enough, the air sirens announce and the Nazis will be there within a few days. After spending some time with the children, as well as fellow French Resistance member Emma (Clémence Poésy), Marceau officially joins the French Resistance. 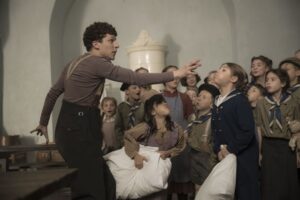 If the title Resistance made you think that this was going to be a rock ‘em, sock ‘em war movie, think again. There actually isn’t any action in the film, save for a little bit of excitement at the end of the film. Resistance is more about the plotting and planning to be one step ahead of the Nazis to help the Jewish children escape their clutches. The one person who’s hot on their trail is Klaus Barbie (Matthias Schweighöfer), AKA “The Butcher of Lyon,” who is as evil as it gets. He even beats a fellow Nazi for either not saluting properly, or being secretly gay… or both. Either way, he’s all sorts of bad. As the occupation increases, the French Resistance realizes that they need to get these kids out of the country under the Nazi’s noses, and that would be no easy task. 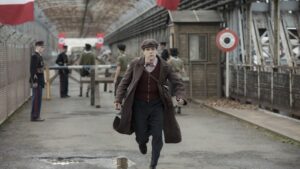 Despite the promise of the premise of the film, Resistance falls a little flat. For one, the film takes about 20 minutes before they even tell you that everything is taking place in France. One can assume that it’s in France if you know who Marcel is, but sometimes it’s better to simply spell it out for the audience. There is a strange side plot surrounding evil Nazi Klaus Barbie having a newborn baby, but it goes almost nowhere, because, at the end of the day, he’s still on a mission to kill children. His fight with his wife about his role in Nazi stuff feels out of place and is never revisited. 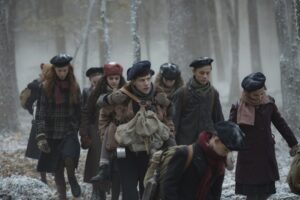 Casting someone like Jesse Eisenberg is good for star power purposes, but he often fades in-between his regular accent and his French accent, which can be distracting. Towards the end, there is a moment where Marceau finally is able to give a definitive mime performance, but it doesn’t really land the way intended. Eisenberg’s performance overall is strong, but the scene-stealer is once again little Lady Mormont. Resistance also has Clémence Poésy’s Emma have just about as much screen time as Eisenberg’s Marcel Marceau, so it feels weird for Resistance to be “his” story as the audience will probably be more emotionally connected to Emma. That said, Resistance does shed a light on a world-famous artist, who many may not know his other side, and that’s the side of a hero, so a film telling his story is still a worthy adventure.