When last we left Ozark, things were looking sorta up for the Brydes. They came into the vacation tourist spot of the Ozarks to launder the Navarro Cartel’s money away from prying eyes. They finally got all their businesses set up, greased all the local palms needed, and got their money laundering casino ready for business. Marty (Jason Bateman) has always wanted to just play it cool and get just enough dirty to handle business, but Wendy (Laura Linney) moved into another playing field as she no longer was going to remain the silent wife, but an active participant and orchestrates a murder of a rival behind his back. That sets a level of distrust between the two already rocky spouses that gets full-blown in season 3 of Ozark. 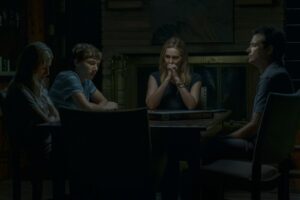 Both Marty and Wendy think they know what’s best for the family. Marty still wants to play it cool and launder money in their new casino, but Wendy is now channeling her inner Walter White and wants to expand their empire. With their cartel boss (Felix Solis finally showing up as head honcho Omar Navarro after spending 2 seasons in the shadows) is fighting a major cartel war in Mexico (one that he is losing), Wendy thinks that purchasing another casino with the money laundering profits for a legal enterprise would be their employer’s nest egg and further their role within the organization. Marty, who knows money (not politics like Wendy) thinks that it’ll be a bad idea that can get them into a lot of trouble. Both of them are right, and both of them are wrong. What makes matters worse is that the married couple is trying over and over to outsmart and outdo each other, which causes all sorts of drama, and headaches for their employer. In addition to possibly pissing off the cartel, their partnership with the local Kansas City mob led by Frank Cosgrove (John Bedford Lloyd) and his incredibly annoying son Frank Jr. (Joseph Sikora AKA “Tommy from Power”) are also in their crosshairs as Jr. is a big problem when it comes to keeping a low profile, but still a made guy, and Jr. and Ruth (Julia Garner) hates Jr. with a passion.

As if they already don’t have enough things to juggle, Wendy’s brother Ben (Tom Pelphrey of Banshee and Iron Fist fame) shows up in need of a place to live. Not only do they need to keep him in the dark for all their criminal activities, but he’s also bipolar and if he doesn’t take his meds (which you know he eventually won’t), that’ll cause all sorts of hell for the Byrdes and their business. While the Bryde’s kids are hip to all the Cartel business they have going on (daughter Charlotte even works from mom in an “internship”), the mob lawyer Helen’s (Janet McTeer) daughter is spending the summer (as part of their custody agreement) in the Ozarks with her while she handles Cartel business there, and Helen’s mandate is that her daughter NEVER finds out about what her mom does. As a result, young Charlotte (Sofia Hublitz) and Jonah (Skylar Gaertne) have to keep their new friend in the dark, while still playing an active role in the family business. Oh and also, thanks to some mishaps, the FBI gets hip to the casino and assigns Maya (Jessica Francis Dukes) to monitor Marty, and she’s just as smart as he is when it comes to money. Needless to say, the Byrdes have their work cut out for them. 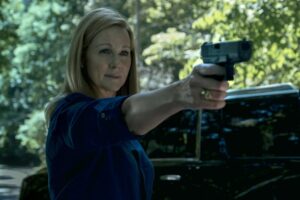 Ozark continues to step up its game as Marty and Wendy continue to try and stay afloat. Jason Bateman continues to shine, but Laura Linney really spreads her wings this season. For one, Wendy plays a much bigger role not only in family decisions, but also in their business operations. Watching her “break bad” is majestic and she can routinely go from meek and vulnerable to badass and cutthroat at the drop of a dime. If you felt short-changed by Janet McTeer’s icy Cartel lawyer Helen last season, you get plenty of her and she not only has to play marriage counselor (much better than the Bryde’s actual marriage counselor did), but she is still basically the voice of the Cartel and makes many of the evil decision for them this side of the border. Our favorite potty mouth Ruth continues to shine and reminds us that why Julia Garner won an Emmy for season 2 of Ozark. Ruth also has her own crosses to bear this season as she is dealing with the fallout with her cousin Wyatt (Charlie Tahan), and an increasingly volatile beef with Kansas City wannabe mob boss Frank Cosgrove Jr. 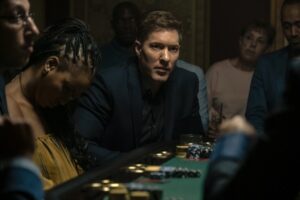 Speaking of Jr., if you are expecting Joseph Sikora to play another version of Tommy from his groundbreaking role from Power, think again! Frank Cosgrove Jr. is such a wannabe fake gangster with a chip on his shoulder, you would wonder why someone hasn’t taken him out before. Of course, thanks to daddy, he gets to be an annoying pest. Just think of a mob version of Donald Trump, or Donald Trump Jr: someone who thinks they are big dog, but are only in their position because of their birthright, and that’s Frank Cosgrove Jr. Other newcomers are also great this season of Ozark. Tom Pelphrey does a really great job as Wendy’s brother Ben. At first, we think he’s just a good guy, but very quickly we get to see how bipolarism can work in this type of situation as he always makes matters worse as he acts before he thinks throughout the season. Even Felix Solis is great as Cartel boss Omar Navarro, and it’s good we finally get to see the boogeyman after 2 seasons of just hearing about him via a whisper campaign. While he is cool and calm, don’t mistake his kindness for weakness. He’ll kill you if you run out of value. The only person who sort of gets the short end of the stick is for mob wife Darlene Snell (Lisa Emery) who spends most of the season taking care of her newfound baby and sleeping with Wyatt for some reason. This season pretty much lays the groundwork for her to be a big player once again for season 4 of Ozark. 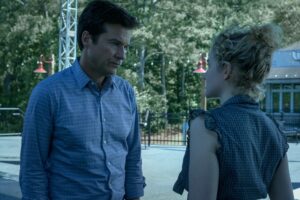 Season 3 of Ozark has plenty of twists and turns, some expected, some come out of the blue in a wonderful way. While some people didn’t like the second season (I did), the third season is a return to form as it hits the ground running, and thanks to so many twists and turns, keeps Marty and Wendy on their toes, all the way to the final moments of the season finale, making you beg for a 4th season!