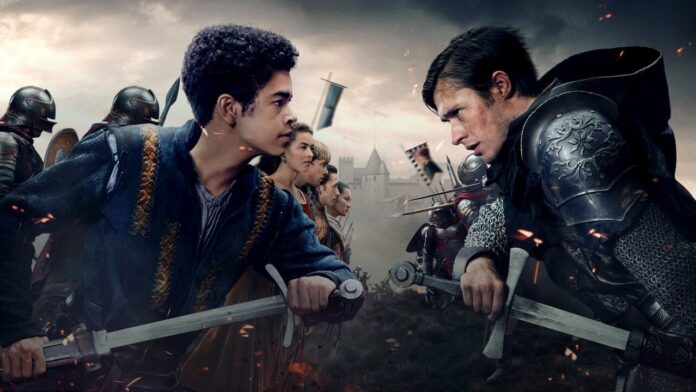 While Game of Thrones is the first thing that comes to mind for most people when you mention medieval fantasy TV series the truth is there have been a ton of options over the last decade if you know where to look. Fantasy has never really had the market cornered on media choices but a surprising number of under the radar options show up every year. Letter For The King is, or would be, one of these shows if not for the power and money behind Papa Netflix’s media machine. Tuiri is on the verge of manhood, and life is not exactly perfect. He lives with his mother and adopted father Sir Tiuri the Valiant (played here by the amazing David Wenham), a knight of the kingdom. Young Tuiri and his mother were saved by Sir Tiruri when their village was destroyed and the were left for dead. Young Tuiri is expected to be a knight like his father, but here’s the thing about adoption…ain’t no DNA transferred there. So while Sir Tiruri is the poster boy for wearing plate armor young Tirui has neither the skill or desire of his father, needless to say his journey to knighthood is not going well. He’s destined for nothing special, that is until a message is given to him by a dying knight. The message has information that can stop the darkness coming and it’s up to Tirui and his “friends” (frenemies is probably a more apt description, at least at the start) to deliver the message and save the day.

Regardless of how I felt about this series I can’t help but to be thankful that Netflix is putting money behind stuff like this. Who knows if it’s a chicken or the egg thing but without streaming we would have some really homogenized entertainment options. Coming across like a mix of 1917, The Goonies, and Excalibur Letter for the King is a good enough time, but it certainly has some issues. The first issue comes down to pacing, an issue affecting so many shows in this age of 10-episode 1 hour shows, it’s just not needed. Boiled down to 4-5 episodes would have allowed for the show to tell the story in full and cut out alot of the fat, a move you’ll really be hoping for during the more drawn out parts of the story. These medevial type shows always seem to have production design that’s either epic or public access tv level. With Netflix money in the mix the design here trends more toward epic but it’s missing something…it’s hard to put words to it, it’s got the closed in feeling of a show like Merlin or Camelot but with that closed in space done up to the 9’s.

Truth be told, I’m not really the target demo here. I’m picking Star Wars over Lord of the Rings 10 times out of 10, so for fantasy to really grip me it’s got to be top-level. Letter for the King almost accomplishes that thanks to the adolescent adventure angle which works soley because of the chemistry between the kids, they aren’t on the level of Stranger Things or The Goonies but it’s believable and enough to latch on to you and have you invested in what happens. Here’s a nice little bonus for fans of The Neverending Story, there’s a featured horse! Ardanwen is everything Artax was, without the tragic, child-hood ruining ending. I’d be lying if I didn’t say that damn horse was one of my favorite characters.