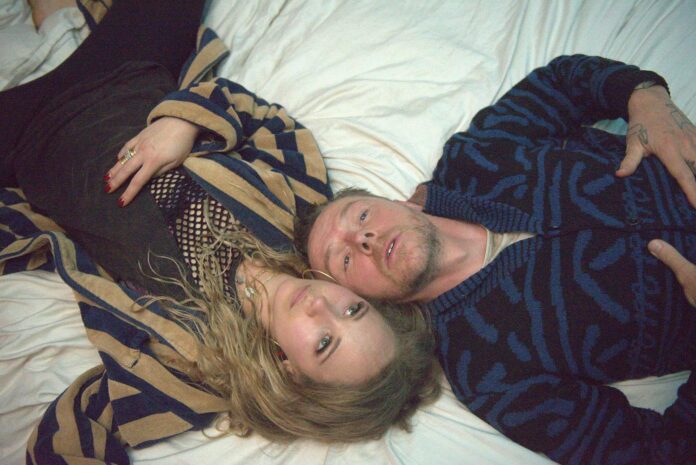 Lost Transmissions explores the oft stigmatized world of mental health through the eyes of a talented record producer and a songwriter trying to get him back on his meds. Theo Ross (Simon Pegg) is usually the life of the party. Quick-witted, intelligent, and musically gifted – he loves to host get-togethers and encourages others to share their musical talents. At one of these parties Theo convinces Hannah (Juno Temple) to sing a song while he accompanies on piano. Theo is drawn to Hannah’s voice and believe that she has a special talent.

Hannah joins Theo in his studio the next day and tries to convince her to stop holding back. Theo wants her to really find her voice. Hannah suffers from depression and has been taking anti-depressants for years. The anti-depressants do affect her singing by shutting a part of her off – but she would rather feel numb than what she was feeling. Theo expresses his disdain for medication and believes they cause one to “live life with a filter over it.” 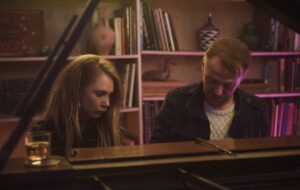 Theo arranges for Hannah to meet some executives at a record studio as well as a diva popstar Dana Lee (Alexandra Daddario). Hannah gets her big break when Dana Lee agrees to let her write songs for her to perform. Hannah has trouble tracking Theo down to tell him the good news, which is the first sign of trouble. Finally getting ahold of Theo, Hannah sees a completely different side of him. Theo is forgetful, can’t concentrate, startled by commonplace noises, and looks distressed.

Upon reaching out to Theo’s friends, Hannah learns that he took dosed drugs decades ago causing a schizophrenic break. Ever since then, Theo has never been the same. His medication luckily helps, but there are times when he just stops taking it – leading to recurring schizophrenic episodes. Hannah tries to convince Theo to take his medication, which he refuses. As Theo continues to spiral, Hannah attempts to get him the help he needs – only to find that the healthcare system cares more about moving Theo quickly through their facilities instead of truly trying to stabilize him. 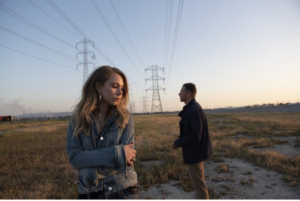 Lost Transmissions is a powerful film that not only explores living and coping with serious mental illnesses, but sheds light on the state of the healthcare system today. Lost Transmissions is the first full length feature from Katharine O’Brien, who wrote and directed the film. The cinematic choices O’Brien makes throughout – the handheld cam work, the way she manages to portray sunny LA as a dreary and gloomy place, the noises from all around that invade Theo’s mind – are all delivered perfectly. The original score by Hugo Nicolson is masterful as well. The music draws you into the scenes, making you feel like you are a part of what is happening. On top of it all, Pegg and Temple deliver amazing performances. Lost Transmissions is a rare foray into the dramatic world for Pegg, and he shines in a truly difficult role.

O’Brien takes time to focus on the strain that Theo’s condition is causing his friends and family. They come together in a sort of intervention, trying to help him get his life back on track. During this intervention it is clear the toll that taking care of Theo has had on them. Ultimately, Theo is lucky to have Hannah in his life. There are many people suffering with mental illness that don’t have someone there for them – their lives spiral out of control, they don’t have access to the care they need, and they end up jobless and homeless. The impact of mental illness is not felt only by the person suffering, but also by those close to them as well.

Lost Transmissions is inspired by a true story and while there are some specific aspects to it that make it unique to Theo’s story, the ideas behind it can be applied to countless people suffering from mental illness across the globe. Lost Transmissions is not only a well-made film, but an informative one as well. Give it a watch, it does not disappoint.