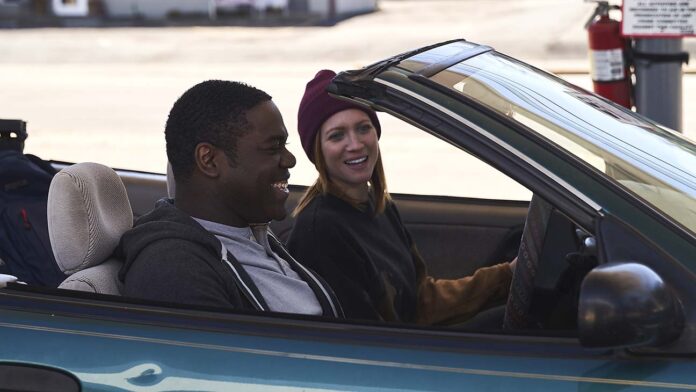 In the new movie Hooking Up, Brittany Snow plays Darla, a sex addict newly fired from her magazine job for…. having sex on her boss’s desk. She’s forced to go to sex addiction meetings where she meets Bailey (Sam Richardson), a young cancer patient who instead of going to his support group wanders into Darla’s meeting. About to undergo treatment for testicular cancer, Bailey drunkenly rants about his breakup and how he soon won’t have any balls left. Intrigued by his predicament, Darla uses his plight as an opportunity to get her job back and invites him on a road trip. Instead of stopping at landmarks and sightseeing, they will stop in every place Darla has ever had sex. As they travel together, they bond and realize life isn’t as complicated as it seems.

Written by Nico Raineau and Lauren Schacher, with Raineau also directing, the film is technically a romantic sex comedy. However for a romantic sex comedy to work, you need chemistry and charisma. Brittany Snow hits all the right notes with this role. She’s quippy, no bullshit, and assertive. But there is no emotional appeal and had the character been a man, they would have definitely been “me-too-ed.” Unappealing characters continue with Sam Richardson’s Bailey. Normally very charming in projects like Veep and Detroiters, Richardson kind of coasts along throughout the film. Of the two characters, his should be somewhat likable and redemptive and he just falls flat. The story line of not being able to follow his dreams of becoming an illustrator completely doesn’t land the way it’s supposed to. The goal of a romantic comedy should be that the audience roots for the characters to be together by the end. Like a teenage boy fumbling to take off a girl’s bra, Hooking Up just couldn’t execute the job with the precision it needs.

The script also lacks charm. There’s a way to do a crude sex comedy that’s redeemable and delightful to watch, think of Sleeping With Other People and Trainwreck. This could be an issue of characterization or flat acting and chemistry, but when you watch characters that you can’t empathize with, do or say not-so-great things in an un-engaging way, the viewing experience feels monotonous after a while.

There are multiple threads in the film that are intriguing and had the lead’s chemistry worked, maybe the movie would have worked. But with Hooking Up, maybe its best that we move on and see other films.