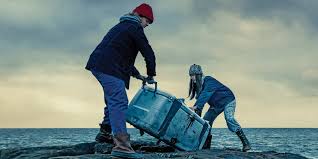 Earlier this week, I said what every film critic says eventually, “I’m over what I’ve been seeing. I need a breath of fresh air.” Part of this is due to self-quarantine and the exorbitant amount of content I’ve seen in that last week and part of this is the quality of what I’ve been reviewing. Keep in mind most films are average, and I was tired of average now that Oscar season was over. Blow The Man Down, which premiered at the 2019 Tribeca Film Festival, blew me away. Dark, engaging, and brilliantly crafted, it’s the breath of fresh air that you want in this time of uncertainty. And it there’s zero chance that breath will get you sick.

Nestled in a quiet little town in Maine is a small fishing village, home to the Connolly sisters. Despite having just lost their mother who left them with very big bills to pay, Mary Beth (Morgan Saylor) dreams of college while Priscilla (Sophie Lowe) is content with her life working at the family’s fish market. After laying their mother to rest and receiving condolences from the Town’s matriarchs (June Squibb, Annette O’Toole, and Marceline Hugot), Mary Beth goes out drinking and comes into the clutches of Gorski. He’s charming, slightly creepy and working as the henchman for the town’s Bed and Brothel. After a skirmish between the two, Mary Beth ends up killing him, pulling Priscilla into the mess. While girls clean up the murder, another body is found on the banks of this little fishing town, calling into question the motives of the B and B owner Enid (Margo Martindale). As questions arise over who else in town is a murderer, the Connolly sisters learn more about their mother, their strength, and who really runs their town.

Not to sound like SNL’s Stefon but this film has everything: Fishing towns, sea shanties, June Squibb leading a group of elderly women, a tight script, female directors and esteemed character actress Margo Martindale running a brothel. It’s a film lover’s dream. Writer and directors Bridget Savage Cole and Danielle Kurdy bring a Cohen brothers feel to their first feature. It’s dark with the slight sense of humor of quick edits and precisely constructed irony. The story is driven by women, but it doesn’t flaunt it. At its core is a sense of matriarchy, but it feels very natural.

Well executed and suspenseful, Martindale, Squibb, Hugot, and O’Toole elevate the material to a surprisingly fun level. Very rarely does a film feel lived in and that’s due to the character work and experience these master actresses clearly possess. If you don’t become obsessed with these performances by the film’s end, you’ll at least be questioning the pasts of the strong maternal figures in your own life.

You’ll be hooked from the film’s sea shanty opening to its sea shanty closing. The soundtrack throughout is jaunty and folksy yet suspenseful, perfectly setting the tone. It’s worth mentioning that Lowe and Saylor give strong performances as the Connolly Sisters, but are understandably overshadowed by outstanding matriarchs in this film. Though the stakes do feel slightly bigger than the payoff, the final product is too entertaining to really notice.

Destined to be one of the best-underrated films of the year, Blow The Man Down is the perfect distraction if you need to kill a couple of hours during quarantine. Luckily, you can watch it on Amazon Prime. You’re welcome.