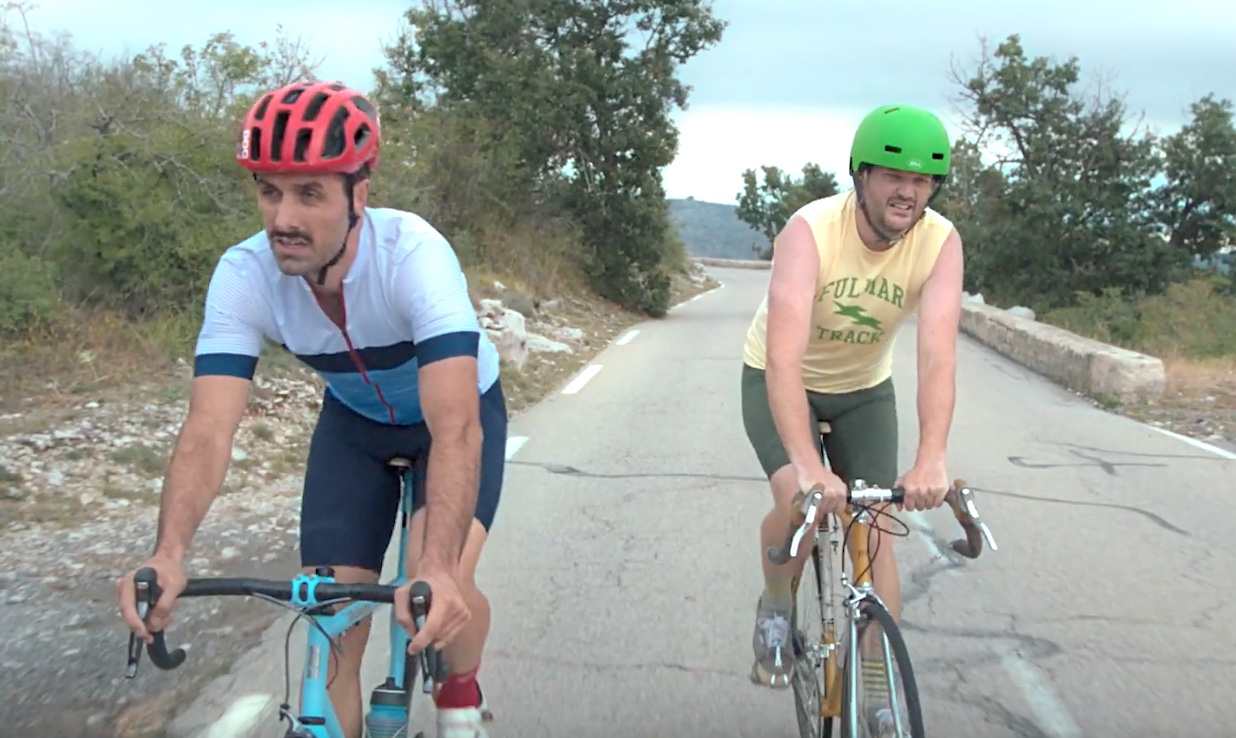 Having friends as an adult is not as easy as it is when you are a kid. Your life is more complicated, social norms are more abstract, and people straight up have to deal with trauma and toxic behavior. These ideas are hilariously explored in the film The Climb, a new film that first premiered at the 2019 Cannes Film Festival and now at Sundance, one of the first films from the festival to be live-streamed out to local theaters around the country. Directed, co-written and starring Michael Angelo Covino with his best friend, co-writer and co-star Kyle Marvin, the title refers to its opening scene where two friends both named Kyle and Mike bike up a hill together, Mike revealing his affair with Mike’s fiancé in the process. What follows is a hilariously uncomfortable romp throughout the rest of their lives.
The Climb, simply summarized as a story of a toxic friendship told over specific moments in time, should not be as funny as it is. If you read the plot points one by one, it reads more like a melodrama than a hilariously real and raw take on toxic male relationships. However the levity Covino and Marvin bring to the script, the tangle of emotion and absurdity permeating in every scene, dissolve any sense that the film would take its self too seriously. There’s a European sensibility to the film, its tone and a dark humor reminiscent of 2014’s Force Majeure (coincidentally its English language remake, Downhill, is also at this year’s Sundance). Broken up into numerical parts with these independent interludes in-between to cleanse the palate, the film still feels light despite the oftentimes heavy subject matter.  These interludes range from an old couple performing ice ballet  to a delightful acapella spiritual sung by grave diggers, these sequences add bright pops of metaphorical color to diffuse tension one may feel after a scene. All of these segments are filmed as one-shots, allowing the passage of time to be conveyed effortlessly.
Rounding out the cast is GLOW’s Gayle Rankin as Kyle’s girlfriend turned fiancé and veteran character Talia Balsam and Cheers alum George Wendt as Kyle’s parents. Balsam provides a no-nonsense yet realistic and stable comedic presence as Kyle’s mom, obviously caring about her son’s best friend even though he has royally screwed up. Rankin provides a layered performance as the girlfriend no one likes, displaying her good qualities along with the bad realistically. It would be so easy to have written and portrayed her as a complete bitch with no redeeming qualities but not as realistic or effective.
In the live-streamed Q and A after the film, Marvin and Covino talked about their process, channeling the slower pacing of 70’s comedies and their very fast 2 month writing time. Though the leads share the same names as the filmmakers, the film is not autobiographical, or at least about them. “I don’t think Mike is Mike and I’m Kyle,” Marvin joked. While film’s events are not autobiographical about the directing duo, they are inspired by a friend sleeping with one of Mike’s exes. When asked about why they choose to film scenes in one shot, Covino responded appropriately with “Birdman did it and it worked for them.” This kind of attitude and comradery make the film work. Not taking themselves too seriously makes cringingly bad friendship faux pas into an engaging and surprising film.
The Climb will open March 20, 2020
4 out of 5