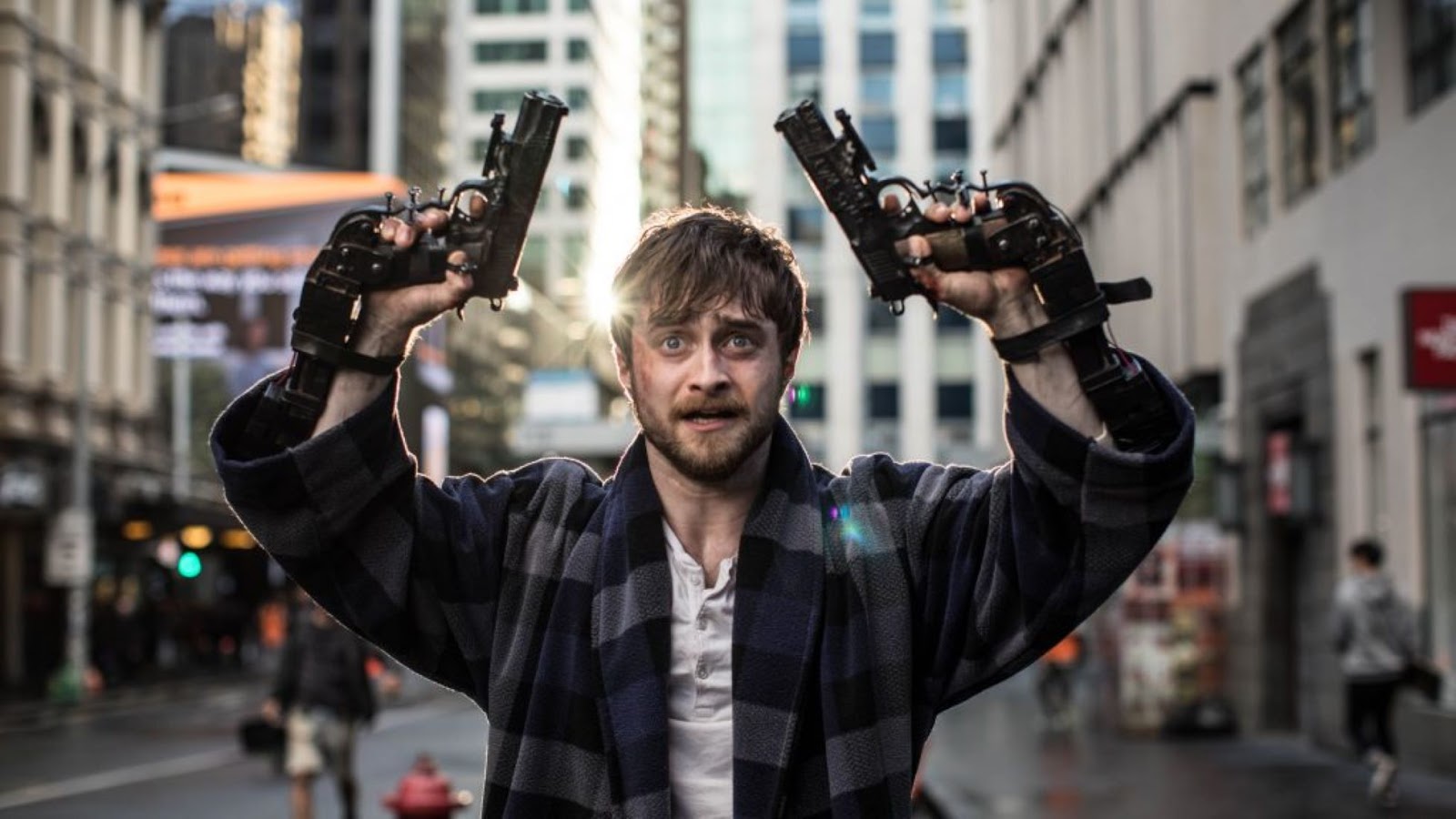 If you found the energetic video game energy of Hardcore Henry palatable, there’s a chance Jason Lei Howden’s similarly riffed Guns Akimbo will be up your alley. But unlike that previous FPS-level actioner, there’s little to engage viewers beyond the sheer wildness of its premise and enjoyable stars Daniel Radcliffe and Samara Weaving as they slum it in a movie that wishes it were half as zany as Crank.

Considering the recent controversy surrounding Howden’s social media attacks on two female writers of color, it’s interesting that his Guns Akimbo hero is Miles, a bullied techie who gets his kicks being an a-hole to others from the safety of his dorky apartment. Still coping with his recent breakup from Nova (Natasha Liu Bordizzo), Miles’ only real enjoyment now is stoking the online trolls who watch Skizm, a global phenomenon in which real death matches are fought and broadcast live from the streets of Shrapnel City. Imagine if The Running Man had been given a nasty upgrade, and you get the idea. Even the folks who run it look like refugees from an apocalyptic future, and when their leader Riktor (Ned Dennehy), gets sick of Miles’ attitude, he decides to make him part of the game. 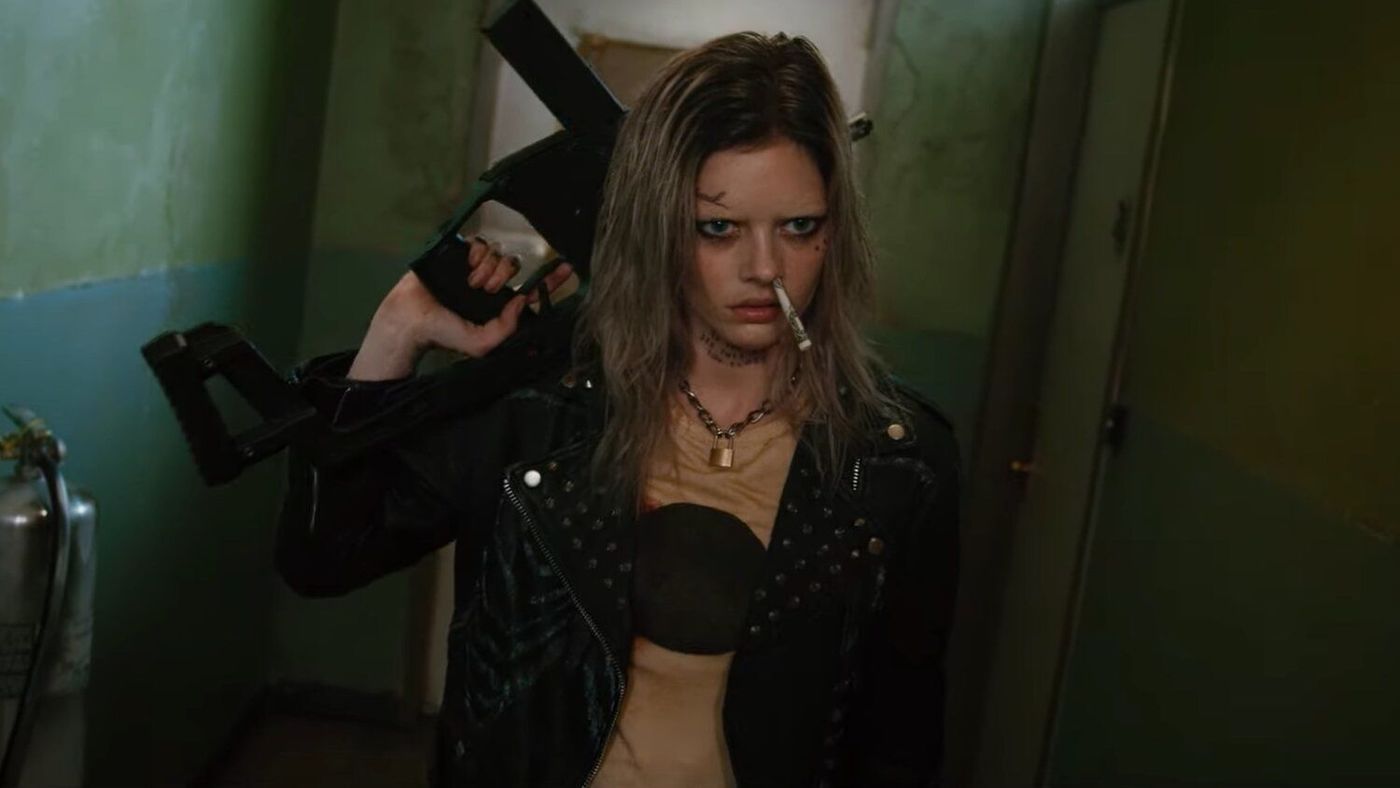 For the surprisingly dim-witted Miles, this means having a pair of revolvers bolted into his hands. If you thought Edward Scissorhands had it rough, Miles Pistolhands has it at least half as bad. Informed he’ll also need to survive the onslaught of Skizm’s master assassin, the killer valkyrie Nix (Weaving), Miles is mostly concerned that he doesn’t know how to pee with a pair of cannons for hands. It’s funny to watch Radcliffe, in yet another macabre role, fumble around to use his phone, or to eat, but the joke is thin and wears off quickly.

Fortunately, Weaving is pretty kickass as Nix, the drug-addicted, eyebrow-free reject who slaughters her foes in such easy, over-the-top fashion it’s like something out of Mortal Kombat, or the Clive Owen flick Shoot ’em Up. She’s so good, literally offing dozens with her eyes closed, it’s completely unbelievable that the hapless Miles eludes her for most of the movie. Suspension of belief is necessary for a movie like Guns Akimbo, but this is just a bridge too far. The guy can’t even eat a hot dog (a really gross, disgusting street dog acquired from a homeless guy) normally and yet he manages to stay alive without any real explanation as to how or why. It’s hard not to get a kick at the hopelessly outmatched Miles, though, with his two little pistols and their 50-rounds of ammo; while every time Nix shows up she’s had a serious weapons upgrade, ultimately coming armed with bazookas to use against the pathetic gamer. 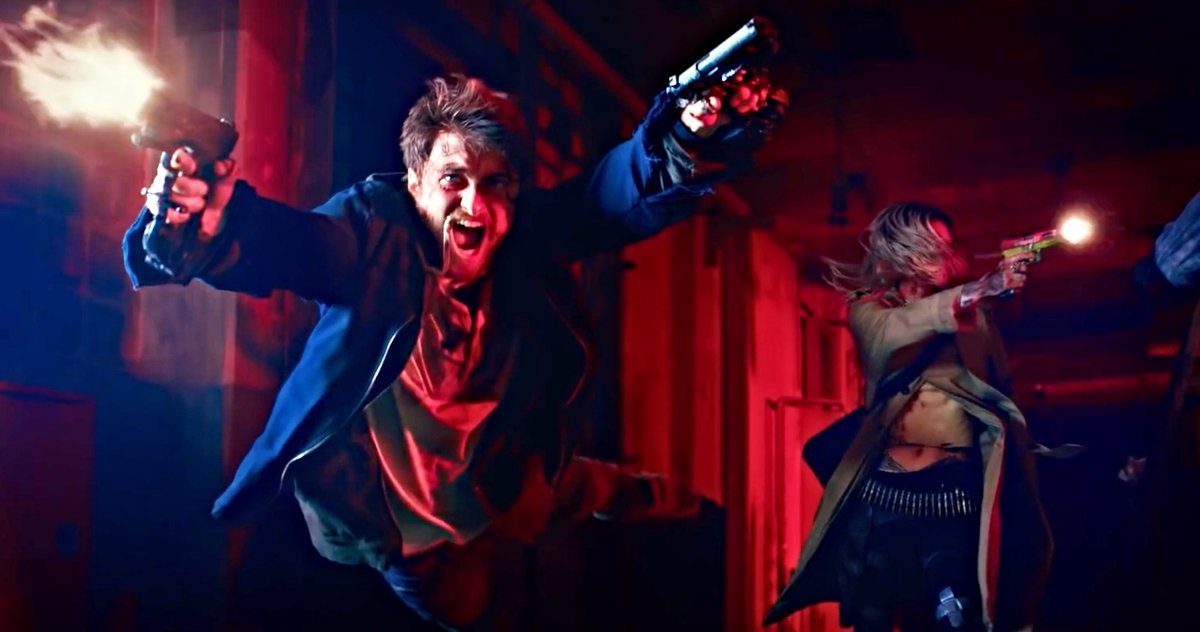 Howden, who also wrote the script, puts the bulk of his energy in the insane visuals. His camerawork, a variety of twisting, turning aerials and angles, are  occasionally “cool” but aren’t backed up by a consistent look, and certainly not by an engaging story. We are never given any reason to give a damn about Miles, and you might come away hoping he’s just another stain on the sidewalk. Howden’s technical skills are slick and promising, but like a video game with great graphics and poor controls, Guns Akimbo just falls short of being worth the time.