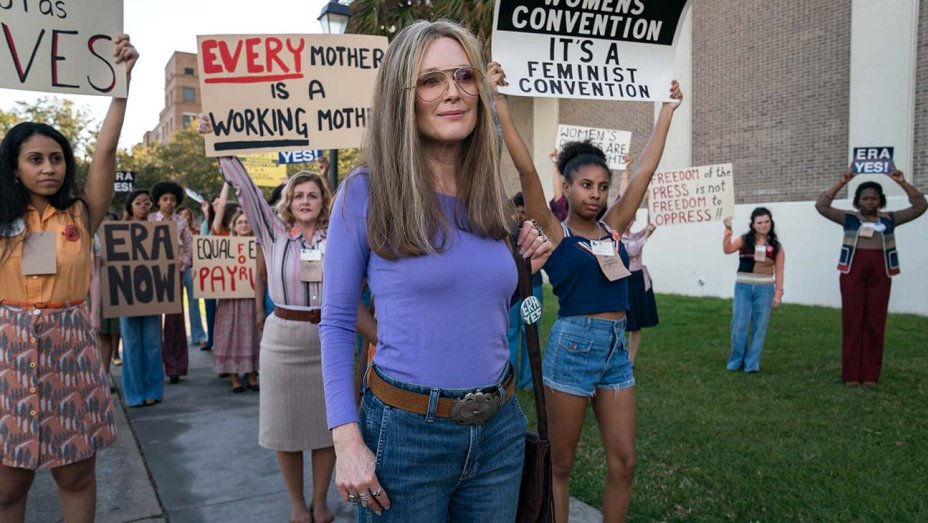 Life’s road is jagged, never a straight line. That’s especially true for renowned feminist activist Gloria Steinem, whose life has always been colored outside of the boundaries. A biopic on her should be just as unconventional, which is why the hiring of Across the Universe and Frida director Julie Taymor for The Glorias was so exciting. And for some of the film Taymor delivers the magical realism and evocative visuals we’d hoped for, with multiple Glorias interacting with one another across multiple time periods. But just as often it slips into mediocre biopic conventions which do Steinem’s story a disservice.

A sprawling effort that encompasses the vast majority of Steinem’s life, The Glorias finds four different actresses portraying her through different stretches. We’re introduced to her as a child (played by Ryan Kiera Armstrong), raised by her ex-journalist mom and her father, a carnival barker/salesman (Timothy Hutton) who has a scheme to get out of every financial jam. Taymor and screenwriter Sarah Ruhl’s screenplay collides that Steinem’s nomadic upbringing with that of her as a teenager (played by Lulu Wilson), and as a young woman (Alicia Vikander) traveling through India. It’s there that she witnesses firsthand the injustices visited upon women on a global scale, helping to form the basis of the hopeful feminist hero she would later become. Following in her mother’s footseps, Steinem begins making waves in the male-dominated world of journalism, facing sexual harassment and discrimination even as she outshines and outsells her colleagues.

It’s during this youthful stretch where The Glorias is at its most engaging, both on a dramatic level and aesthetically. Scenes melt into one another, the many versions of Steinem interacting, giving one another advice and criticisms while journeying on a metaphysical bus to anywhere.  Sometimes these dialogs hit a little too on-the-nose, others are buried under Taymor’s self-indulgence. A bizarre, unnecessary sequence finds a chauvinistic interviewer caught in the eye of a hurricane while the many Glorias are transformed into wicked Witches.

Taymor pulls in the reins as Steinem enters her forties (now played by Julianne Moore), conventionally hopping through one event to the next.  We see the formation of the Women’s movement, the creation of Ms. Magazine, as well as Steinem’s many friendships with activists Bella Abzug (Bette Midler), Dorothy Pittman Hughes (Janelle Monae), and Wilma Mankiller (Kimberly Guerrero). All of these women of diverse backgrounds and philosophies would shape Steinem through to her impassioned speech at the first Women’s March, just as women’s rights were about to be under renewed threat.

Uneven but still an absorbing ride, The Glorias remains a testament to Gloria Steinem’s endurance as leader of a movement that continues to face opposition, and to the complexity of the road traveled to get where she is now.

‘Tomb Raider’ Sequel Is Dead After MGM Loses The Rights’