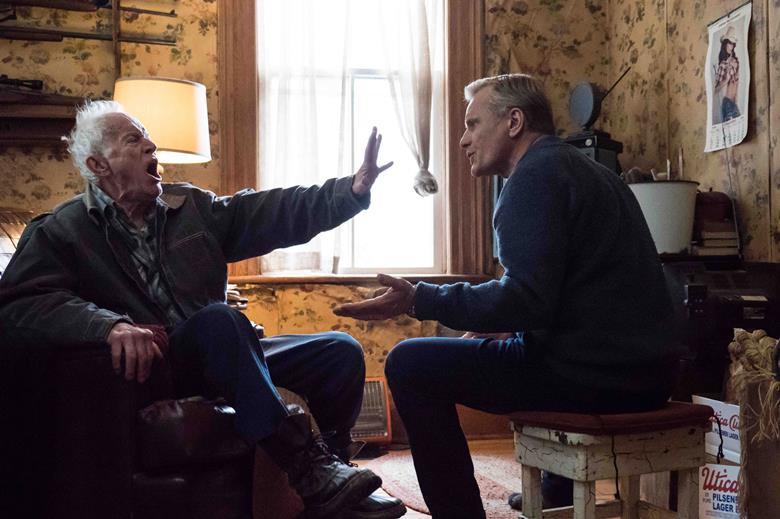 Viggo Mortensen returns to Sundance for the first time since 2016’s Captain Fantastic, but this time the multi Oscar-nominated actor has added writer and director to his credentials. Falling is a deeply personal family saga that began as Mortensen reconciling a troubled past with his father, but morphed into a fictional story about a son coping with his strong-willed, abusive father’s slip into dementia. Mortensen, frequently matched with a powerful performance by Lance Henriksen, lays the groundwork for a moving family drama but too often resorts to shouting matches over genuine character insights.

Drifting between the present and the past, Falling stars Mortensen as John Peterson, a gay man living in California with his partner Eric (Terry Chen) and young daughter, however his stubborn old man Willis (Henriksen) still runs the family farm back home in upstate New York. With his mind slipping, John fetches his father to bring him back west, only to find Willis’ frequent mood swings and drifts in and out of reality to be a constant source of painful memory.

Willis’ outbursts manifest in one racist, homophobic tirade after another, with the words “shit, whore, fag, slut” and worse never too far away. Mortensen isn’t quick to forgive the old-timer for his archaic attitude, but he does show, through the gentle use of flashback, how easily Willis falls into memories of his younger self, his two failed marriages largely due to his philandering, and how this drives him to outrage.  Despite his frequent bashing of John and Eric’s relationship (he still refers to the latter as John’s Japanese boyfriend, he is neither), he connects warmly with their daughter Monica, even if some of his life lessons prove problematic.  He seems most comfortable out in nature, whether hunting or caring for his horses.

It’s a confident, assured directorial effort by Mortensen, who breezes through the various time periods (with Borg/McEnroe star Sverrir Gudnason as young Willis) with ease. Some confusion is expected and deliberate, as Willis can barely keep track of the many people in his life, confusing one wife with another on multiple occasions. Mortensen, who only agreed to star so the movie could get made, writes himself a passive role, one in which John lets demeaning insults brush off his shoulders up until the moment he can take no more.  When that expected clash finally happens, the pent-up rage and frustration is undeniable but also wraps up too neatly over a cup of coffee and a morning crossword puzzle.

In his extensive career as a beloved character actor, typically in sci-fi and fantasy projects, Henriksen has never had a role that asks us to engage with him quite like this. It’s a difficult role; Willis is as cruel as they come, but Henriksen finds a few cracks in the armor that manifest in surprising ways.  Still, there’s hardly a single interaction, even when extended members of the family get involved (Laura Linney briefly appears as John’s sister), that isn’t just a bunch of people listening to Willis scream at them. We become as exhausted from it as they are, making the healing process these characters undergo tough to be taken at face value. It becomes a question of whether someone who has caused so much pain is worthy of forgiveness. Falling makes the case that it is never too late to move beyond the hurt and chart a new course. It’s a passionate, heartfelt debut for Mortensen, and a film many will relate to because of how tough the material is to watch.