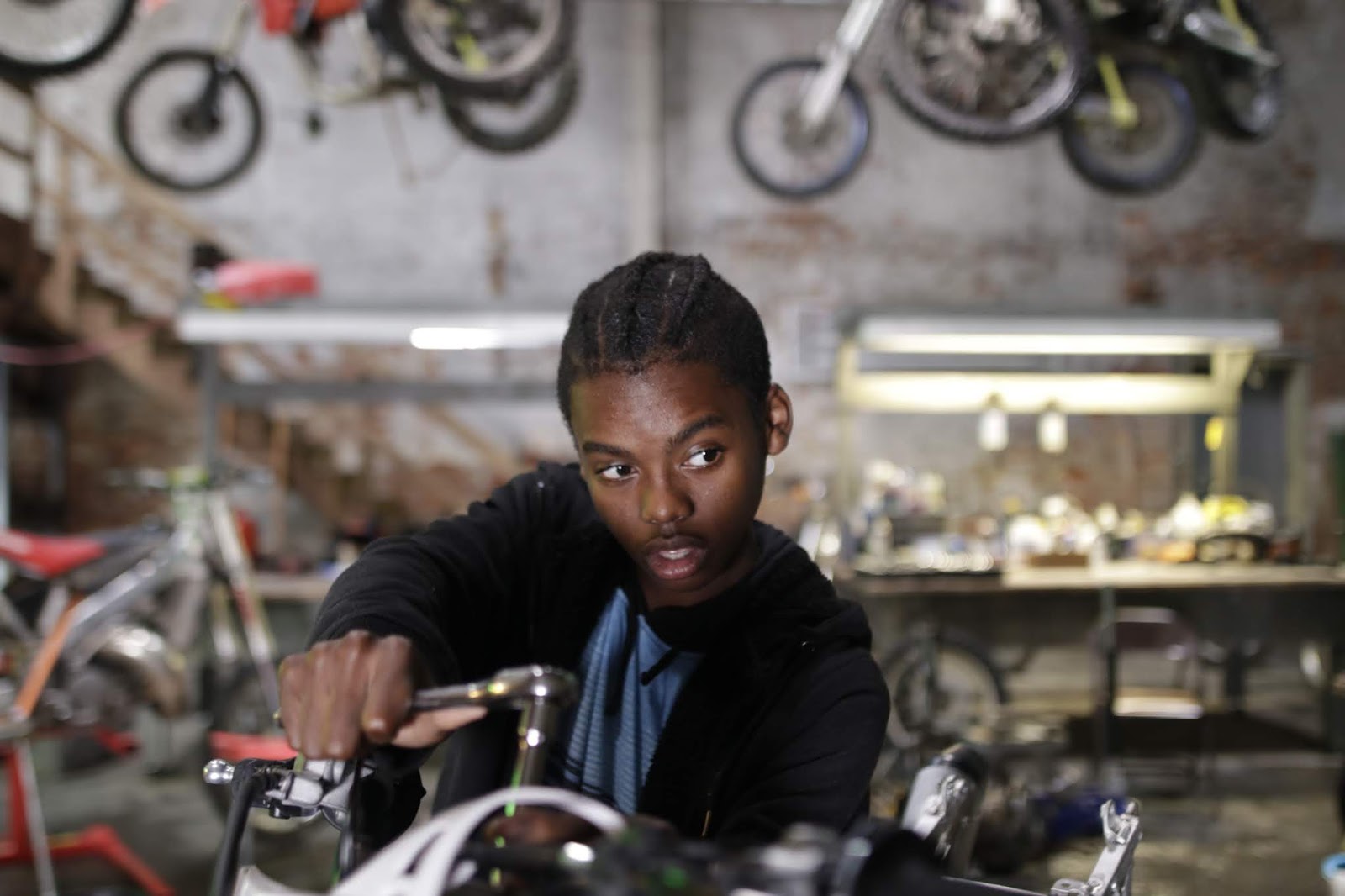 If all you’ve seen of Baltimore are episodes of The Wire, you may be surprised to learn there’s a thriving motorcycle culture within the black community. First brought to the attention of many in the documentary 12 O’Clock Boys, the scene of black men and women poppin’ wheelies on dirt bikes may be an eye-opener, but it also serves as fuel for the propulsive and poignant drama Charm City Kings. It’s a powerful, if at times familiar urban coming-of-age story, echoing similar films including Boyz In the Hood and Menace II Society, but is driven by a confident directorial hand by Angel Manuel Soto, and a pair of dynamite performances by Jahi Di’Allo Winston and rapper Meek Mill.

Winston, who had a small but pivotal role in Queen & Slim, plays 14-year-old Mouse, who idolizes the biker gangs that rule the Baltimore streets. Those gangs, those streets, are largely responsible for the death of Mouse’s older brother, and his mother (Teyonah Parris) isn’t about to let the same thing happen to her only remaining son. But Mouse, along with his two buddies Lamont (Donielle T. Hansley Jr.) and Sweatagawd (Kezil Curtis) yearns for the respect and freedom that being a biker affords. Even more, they revere the Midnight Clique, the “Michael Jordan” of all the gangs, and Mouse sets out to make sure they become members by summer’s end. 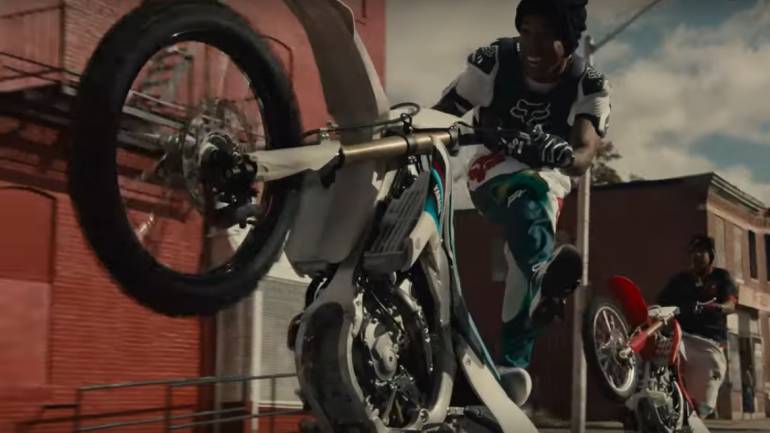 Soto establishes a light-hearted tone early, with the trio of boys ribbing one another dreaming of all the girls they’re going to get. Mouse may seem like a badass little street rat, but there’s more to him than that. An animal lover, he works part time at a shelter, a job his mom hopes will lead to a veterinary career. That, along with the constant presence of Detective Rivers (William Catlett), help to keep Mouse on the straight and narrow, despite a couple of harmless infractions for riding his quad illegally. The mood begins to shift with the arrival of Blax (Meek Mill), former leader of the Midnight Clique now out on parole. Determined to make up for past sins, he takes Mouse under his wing and begins to mentor him on more than just how to get a dope ride. As father figures go, Blax is all about tough love because that’s how a man is forged on the streets. But the new leaders of the Clique, Queen and Jamal (ex-bikers Lakeyria Doughty and Pacino Braxton) are the tough, violent embodiment of everything Mouse has seen growing up, and eventually, he and his friends move towards their way of running things. There’s also a burgeoning love story between Mouse and west coast gal Nicki (Chandler Dupont), who sees through to his sensitive side. “It’s like the ocean”, Mouse tells her about the joy of stunt riding.

While the story beats are somewhat predictable, the characters always cut against the grain. Mouse is a multi-faceted kid, who can be tender one minute with Nicki then a stupid idiot contemplating crimes the next minute. Even when he goes against the law Mouse is usually doing it for reasons he feels are right; such as wanting to help his struggling mother with the bills. Tension always builds believably, with Soto turning up the heat slowly before letting it boil over. It’s joked that Mouse has a bunch of Mr. Miyagis (Pat Morita in The Karate Kid) always chasing after him, and that’s not too far from the truth. Somebody is always trying to pull Mouse in a certain direction; Winston and Blax have his best interests but different approaches to it; while the other Clique members look to lead him down a similar path as his deceased bro. As is so often the case with young black men in underserved communities, Mouse doesn’t always make the right choice. 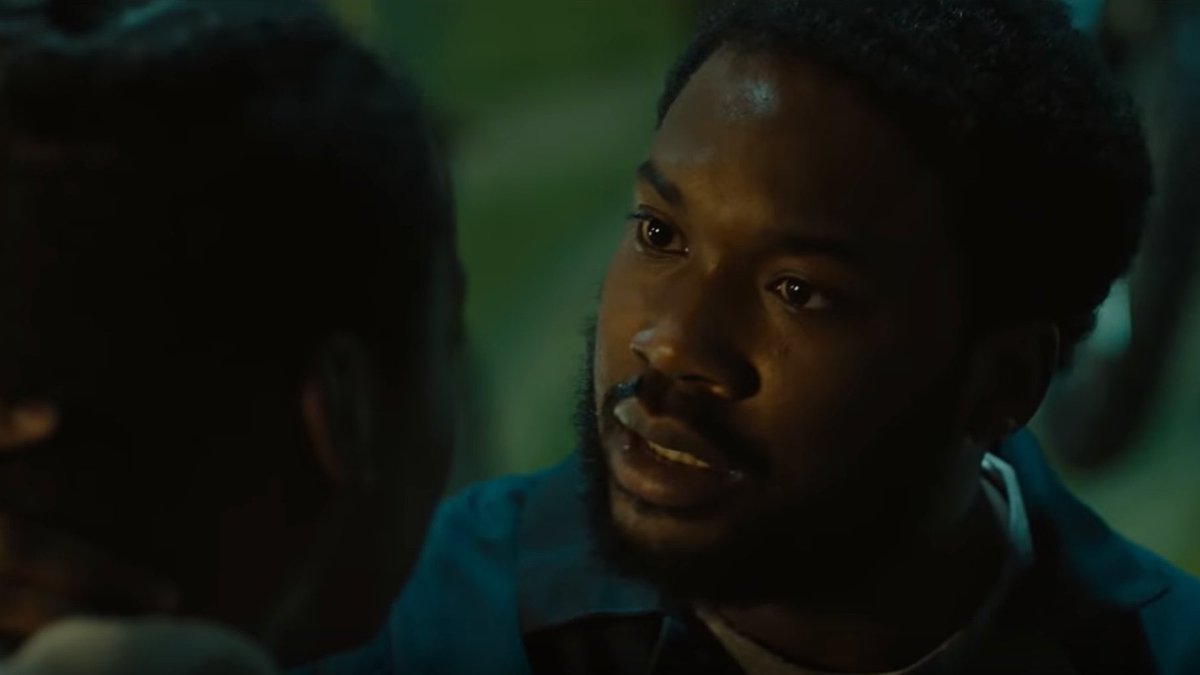 Charm City Kings is penned by Sherman Payne, from a story co-developed by Moonlight’s Barry Jenkins. One can easily see where the attraction would be for Jenkins, as it explores with heart and soulfulness a mostly-unknown part of the black experience.  The dirt bike racing sequences are filmed with a deep appreciation for the riders’ artistry, dancing as they balance their rides high off the ground, front wheels suspended straght in the air, like a clock striking midnight, 12 O’clock.  Nimble tracking shots guide us through The Ride, a gathering of the Baltimore’s best riders, cheered on by crowds bigger and more colorful than in any Fast & Furious street race. Soto’s confidence behind the camera and skill at filming action would make him a solid fit for a  chapter in that blockbuster franchise. Somebody needs to make that happen.

Not all of the characters get their due, however, and at 2-hours the story is occasionally in need of a jump start. A love story feels extraneous when Mouse has so much tugging at him already, but that’s nothing against Winston’s portrayal; the young actor is a revelation and I can’t wait to see what else he does. The same goes for Meek Mill who is the affecting and authentic heart that Charm City Kings rides or dies by. Come for the cool motorcycle tricks and stunts, but stay for one of the truest dramas about a young black man trying to put himself in the driver’s seat.