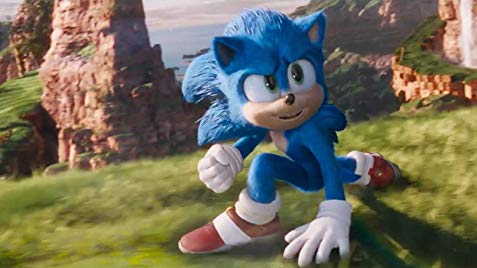 It isn’t too much longer until we will get to see our beloved blue speedster on the big screen in a live-action movie. On February 14, Paramount Pictures plans to release ‘Sonic the Hedgehog‘ in theatres, and we are crossing our fingers that it will be a gleefully fun experience at the movies.

The film was met with immense backlash on social media when its first official teaser trailer was released online back in April of 2019, due to the design used on the titular character. Fans of the series and general audiences complained that the character looked too creepy and bizarre, and not like the Sonic they know and love. Gratefully though, the team went back and redesigned the entire look of Sonic and it looked a whole lot better.

With the release of the movie imminent, we can now enjoy a Super Bowl LIV television commercial promoting the film. In the commercial, we see various different athletes such as Christian McCaffrey, Allyson Felix, and Kyle Busch talking about how fast the hedgehog is. We then see that it was Sonic himself conducting the interviews with all the athletes, and we are then shown footage from the film. If the newest trailers are any indication, it looks like this could actually be a blast of a movie.

‘Sonic the Hedgehog‘ is scheduled to be released theatrically on February 14, 2020.