Oscar voting is well underway as we are less than two weeks from Hollywood’s biggest night. It’s that time of year for nominated films to be released back into theaters and for you to see the collection of Oscar-nominated shorts gracing your screen for your consideration. This year in the animation category, multiple countries, themes, and styles are represented, creating a more adult vibe to this year’s contenders than expected. Stop motion animation seems to be the medium of choice with three out of the five films choosing this often tedious method over traditional animation. Because of its more mature atmosphere, the vibe of this year’s crop is darker but that does not take away from their brilliance or impact. Here are this year’s Oscar nominees for best animated short. 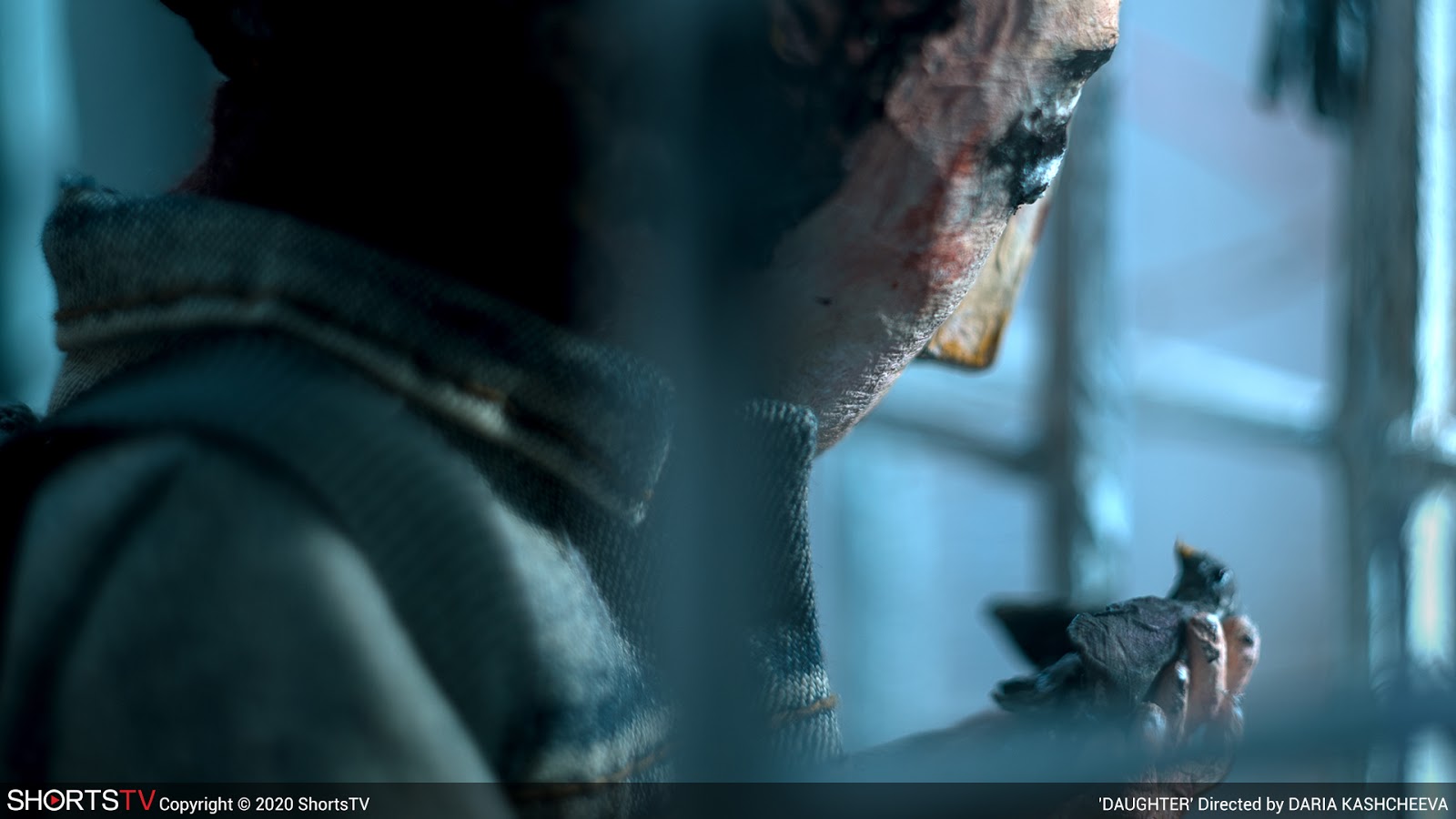 Dcera (Daughter) – Dir. Daria Kashcheeva, Czech Republic, 15 min.
Easily the standout of the nominees, this stop motion puppet animation pushes the boundaries of what an animated short can do. Using extreme close-ups and handheld camera work, director Kashcheeva uses a live-action approach to the cinematography to convey the struggle of a father and daughter relationship as the father is hospitalized. The smoothness of the camera movement coupled with sweet subtle music and moving bird imagery, propel the silent film, not only to the Oscars but to groundbreaking part of animation we’ve never really seen before.
Rating: 4.5 out of 5 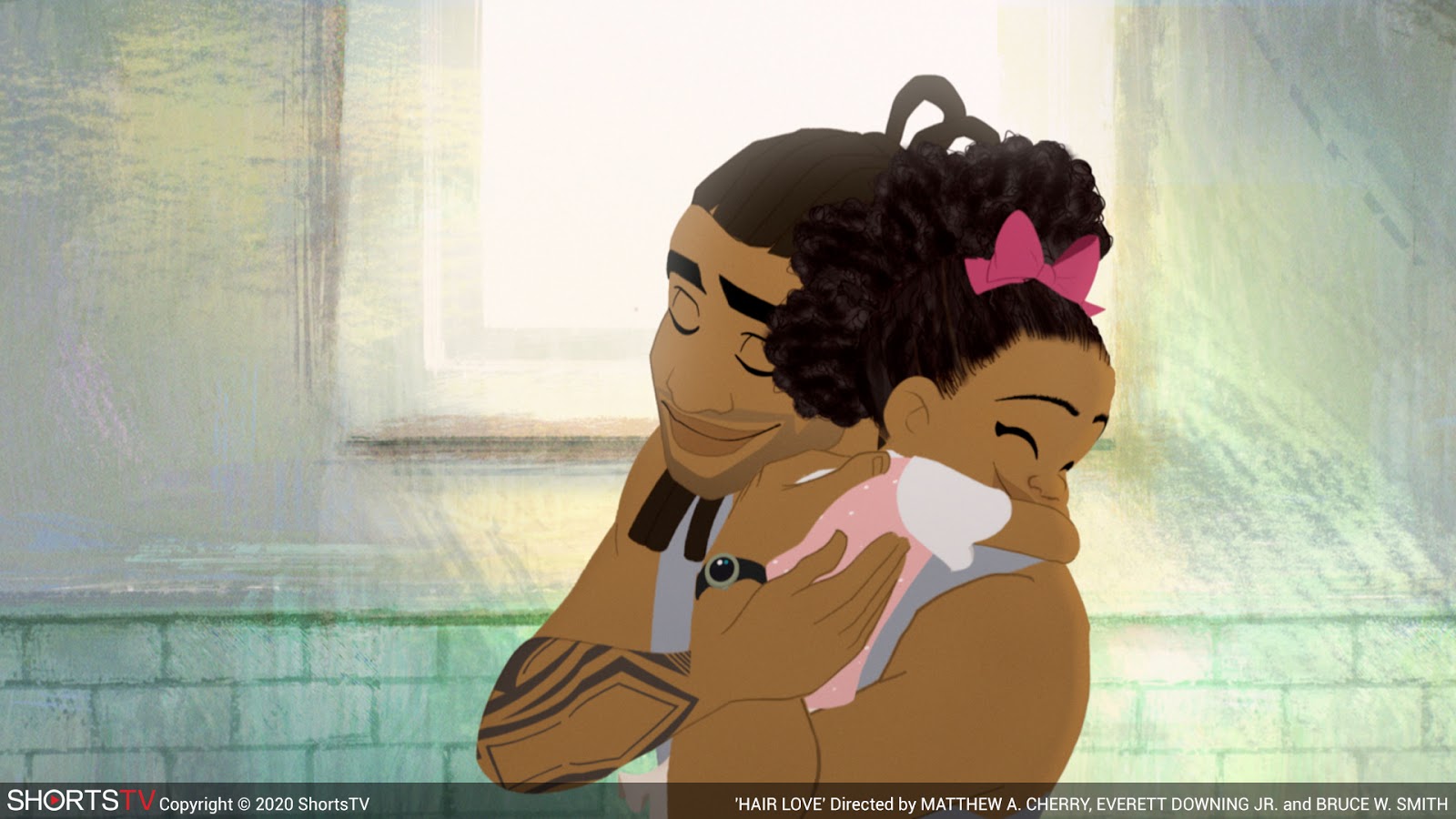 Hair Love – Dir. Matthew A. Cherry, Everett Downing Jr. and Bruce W. Smith, USA, 7 min.
The film with the most star power and Hollywood force behind it, Hair Love is a moving story of representation and everyday determination as a little black girl and her dad try to tame her beautiful hair before a very important day. Making the Facebook rounds in the fall of last year, with Spiderman: Into the Spiderverse co-director Peter Ramsey on as an executive producer and Sony Pictures Animation behind it, this simple, soft and classic style animation is a likely bet for your Oscar pool. Using minimal dialogue, except for Issa Rae as Zuri’s beauty vlogger mom, the film knows exactly which buttons to push to reach a high emotional impact: representation, black girl magic, daddy/daughter bonding, to name a few. It’s fun and light-hearted when it needs to be before hitting that powerful endnote. It’s arguably the most commercial of the shorts and with its successful Kickstarter campaign, Hair Love proves that representation can be powerful and still deeply wanted.
Rating: 3.5 out of 5 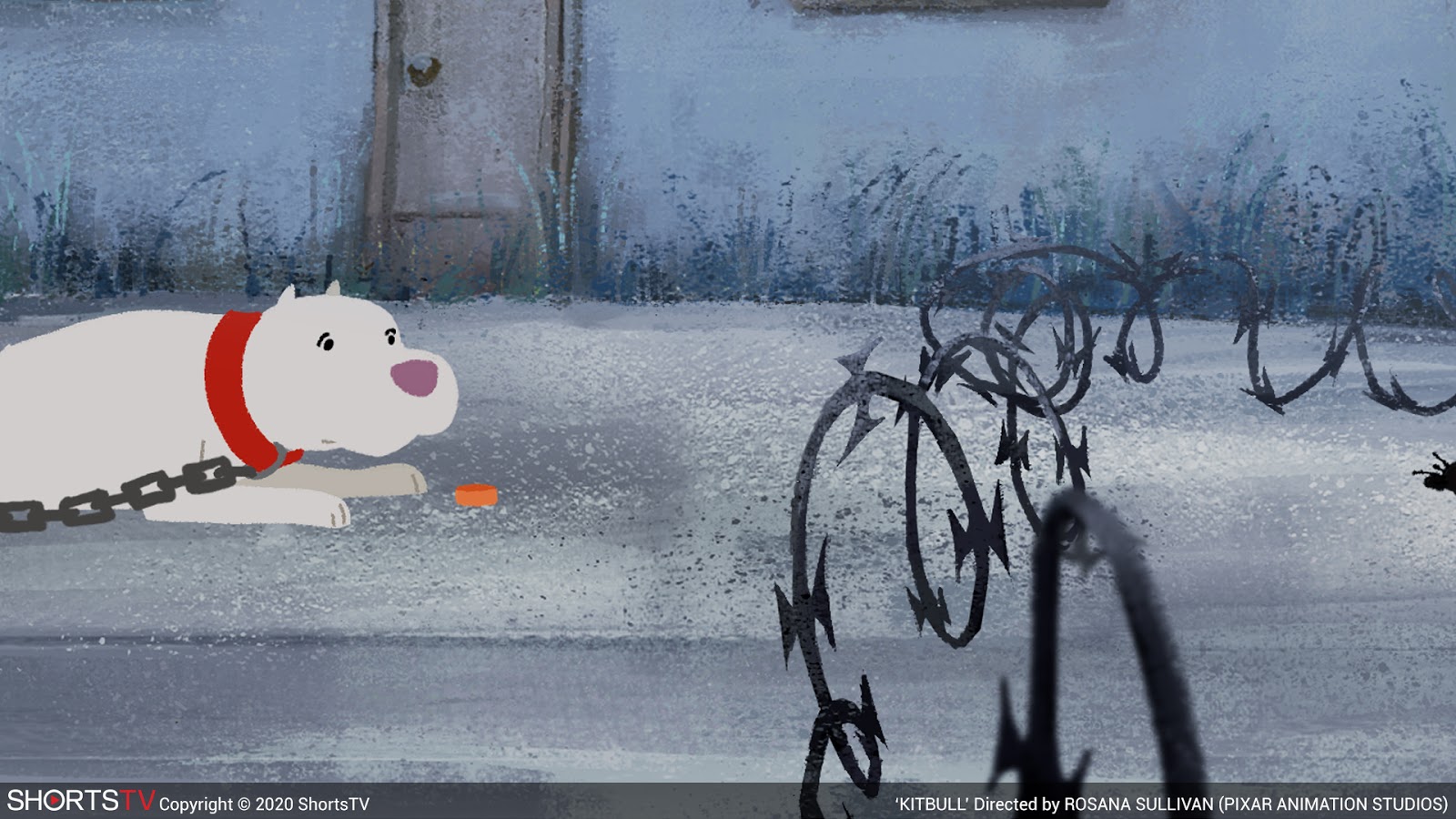 Kitbull – Dir. Rosana Sullivan, USA, 9 min.
Produced by Disney and Pixar, this surprisingly dark short was released on Youtube in mid-2019. Capturing the relationship between a feral kitten and a well-meaning pitbull, the two learn to bond and depend on each other in a cruel and unfair world. Touching on animal cruelty and shared trauma, this short feels more mature than past Disney/Pixar submissions. With a more traditional but soft animation style, the short is more clear-cut and predictable than its other nominees but no less emotional. 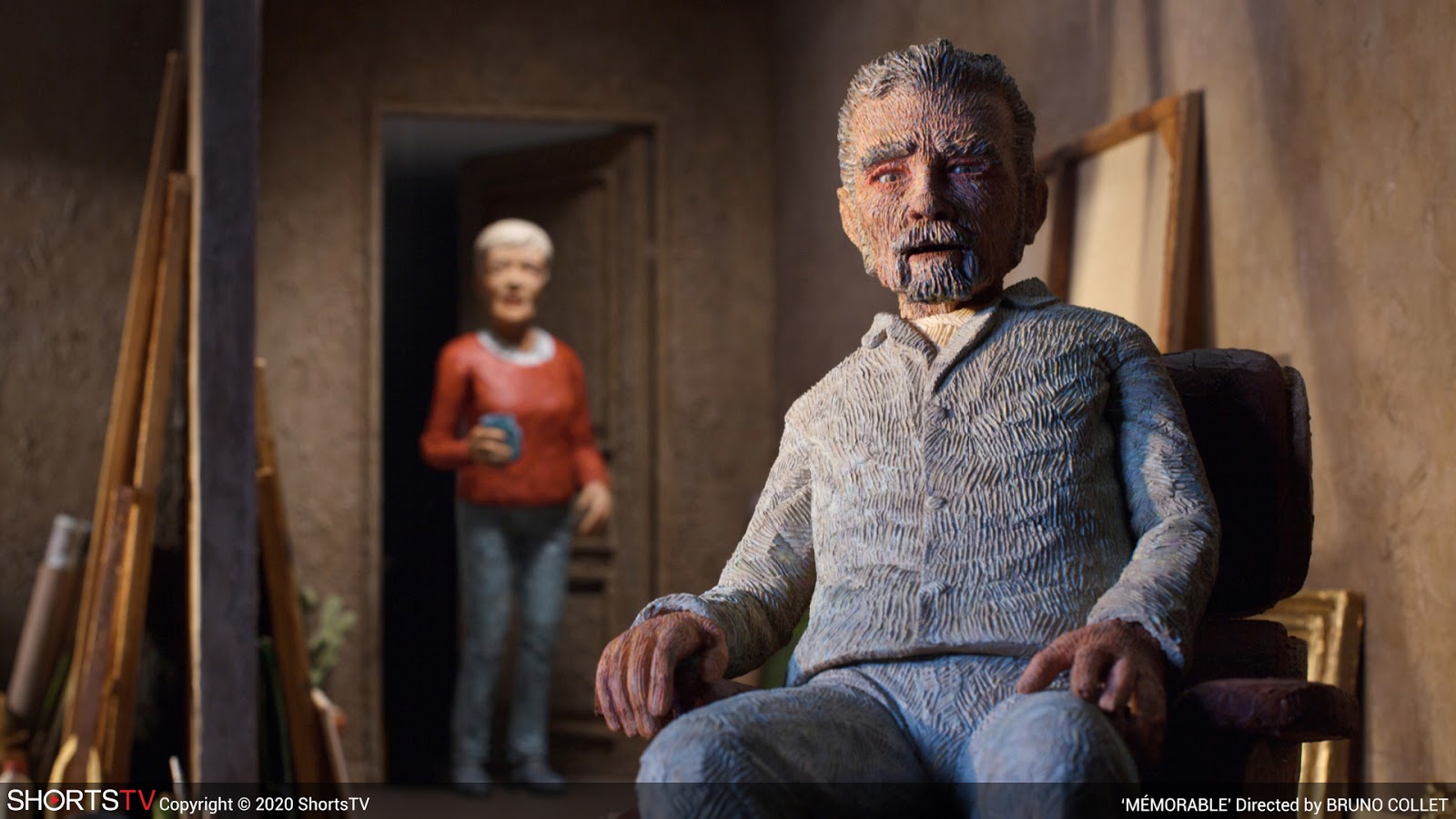 Mémorable – Dir. Bruno Collet, France, 12 min.
This film breaks from its own stop motion animation style in order to illustrate how Alzheimer’s experienced by the patient. Taking advantage of different painting styles on the models, even delving into a Van Gogh “Starry Night” Motif, Mémorable literally illustrates the confusion and strain on those with the debilitating condition through the married couple Louis and Michelle. Combining the surreal with reality, director Bruno Collet puts the audience in Louis’s shoes, utilizing animation to emerge us in this condition like we never have before.
Rating: 4 out of 5 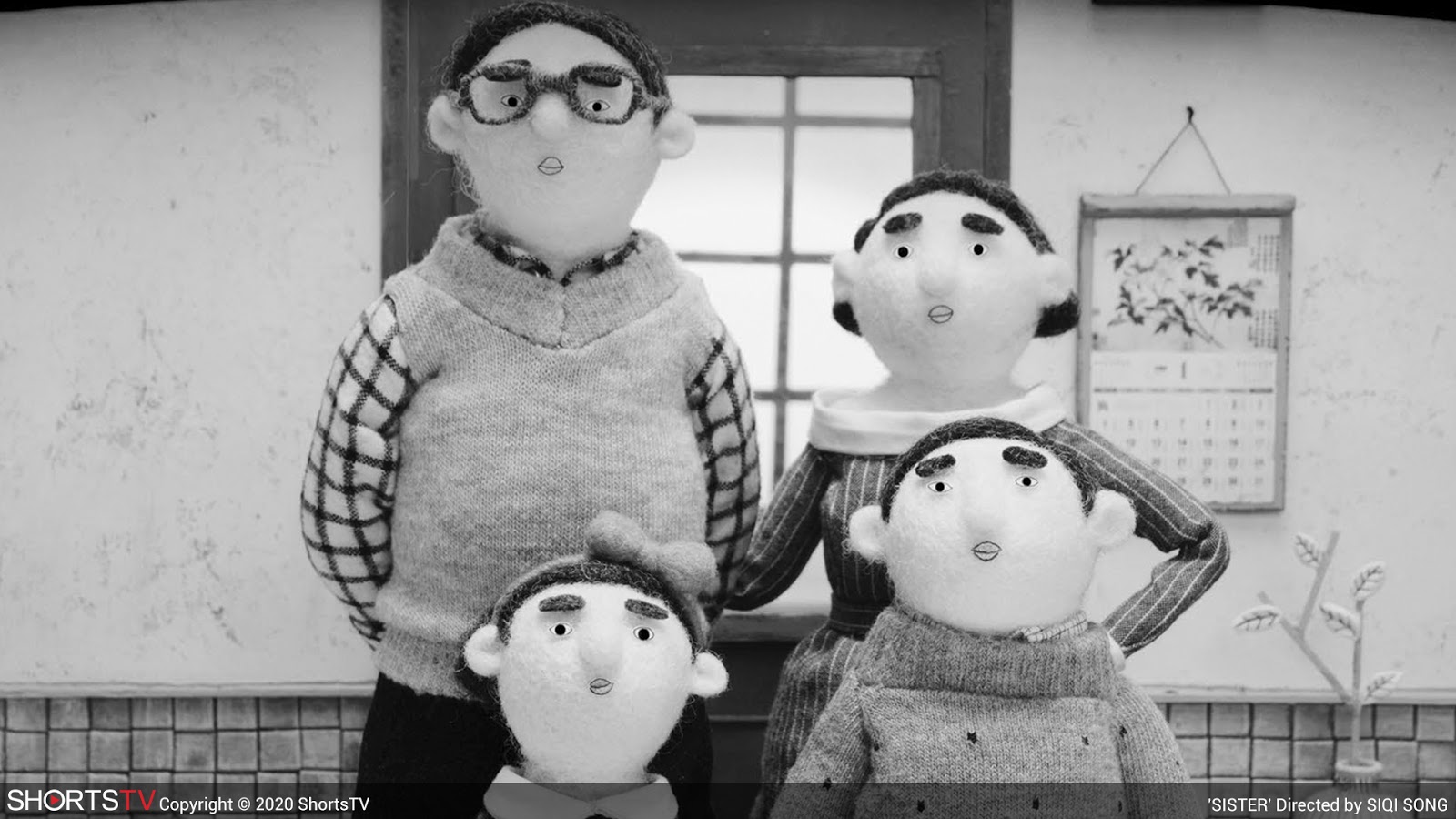 Sister – Dir, Siqi Song, China/USA, 8 mins.
It seems that every category of the Oscars has to have at least one nominee that makes a political statement. Sister is that nominee for animated short. Using stop motion animated puppets and a world made of felt, this film starts out with an adult male voice retelling his history with his little sister. The mostly black and white color palette (with a few pops of red), start out feeling like a quirky creative choice until the film’s inner motives are made clear. With a powerful plot twist calling out a particular Chinese ethical practice, this seemingly sweet tribute to siblinghood feels like a punch in the gut by the time the credits roll.
Rating: 3.5 out of 5
Included in the showcase but not Oscar-nominated are Henrietta Bulkowski, a story of a girl with a hunchback who wants to fly with Anne Dowd, Christina Hendricks, and Chris Copper lending their voices, Hors Paste, a French 80’s inspired ski rescue focused dark comedy, The Bird and The Whale, a sweet but sad Irish film straight out of a picture book, and Maestro, a less than two minute short where hyper-realistic forest animals sing opera. In a year with many strong contenders, only time will tell which one will go home with the golden statue.
All films are at Landmark’s E Street Cinema and Bethesda Row Cinema now!