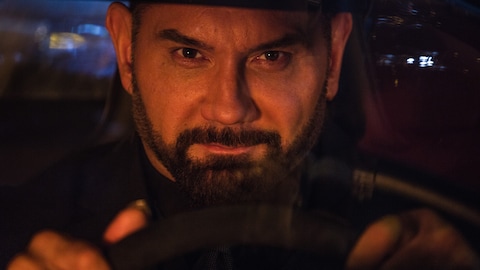 This is the amazing thing about the world of entertainment today. There can be a TV show starring one of the world’s biggest stars and people don’t know it exists. Such as seems to be the case with Apple +’s slate, which was comprised of quite a few quality shows, including SEE a post apocalyptic drama starring Jason Mamoa in the type of role he was built for. So what can make a show with Aquaman as a Mad Max father figure more interesting? Well, Drax the Destroyer, that’s what. Dave Bautista has signed on for the second season of See.

For those like me who totally missed the memo on this show, here’s the synopsis:

In the distant future, the human race has lost the sense of sight, and society is left to find new ways to interact, build, hunt, and survive. Meanwhile, the wife of blind warrior and chieftain Baba Voss gives birth to a set of twins. To his tribe’s amazement, the twins can see.

As word spreads, it gets the attention of a cynical tribe and its queen who will stop at nothing to get their hands on the twins. In order to protect his children, Voss is forced to rely on his instincts and must rally fellow tribes to take down the queen and her tyrannical cult before they can capture the children.

The series is set in the village of Alkenny, protected by a Kanzua Dam. “Alkenny” and “Kanzua” are alterations of Allegheny and Kinzua, real-life locations in present-day western Pennsylvania.

Well….I’m in. There’s no confirmed date for season 2 yet, but you can bet on late 2020. Maybe it’s time to try out that Apple+ free trial and get to binge-ing.