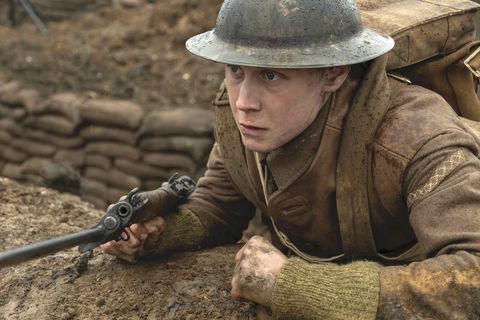 There are two moments of peace bookending Sam Mendes’ WWI epic, 1917. In the beginning, we see young British soldiers Blake (Dean-Charles Chapman) and Schofield (George MacKay, a superstar in the making) resting casually beneath a tree, indulging in a gentleness so deep you forget why they’re where they are. Between this bookended calm (the latter I won’t spoil for obvious reasons), is a harsh reminder of the reality of their situation. The Great War is tearing the world apart all around them, and before long they’ll be right in the bowels of it.

Mendes’ 1917 is a special movie; the kind that arrives once a decade not once a year. We’ve all heard the overused phrase “War is Hell”, and undoubtedly it’s true, but rarely captured cinematically in such a visceral way and with this level of technical skill.  War movies, in contrast to the cheerleading variety of earlier decades, are now mostly about the sheer horror that soldiers face. It sticks with them long after they’ve left the battlefield, leaving glassy-eyed ghosts to try and forget everything they’ve seen and done.

1917 is about making us understand, down into our bones, what that Hell is like. Mendes and co-writer Kristy Wilson-Cairns’ approach, a single continuous take to capture a nightmarish suicide mission, could’ve been just a cheap gimmick aimed at Oscar voters. If that’s your thought going in you won’t feel that way afterwards. It’s a crucial element in depicting how all-encompassing the danger truly is; death comes from every direction and when least expected, and often you never see it coming until too late. The magic of Mendes’ direction, and the brilliant cinematography by the great Roger Deakins, is how so much is framed to keep us, and thus the two Lance Corporals we’re following, at a disadvantage. If your nerves aren’t frayed by the end of this there must be icewater in your veins.

The story itself is remarkably straight-forward, a nightmare run through a series of trenches one more dangerous than the next. Blake and Schofield are to make the journey, alone, across miles of abandoned battlefield to stop a distant British regiment from charging right into a German trap. Abandoned doesn’t mean safe, mind you. The Germans knew they’d be followed and there all sorts of deadly goodies just waiting to befall any soldiers on their trail. There’s a personal stake at the heart of this mission as Blake’s brother is among the troops they’ll be saving from certain doom. The clock is ticking, and they won’t even have the cover of night to help them.

From the moment this impossible mission begins Mendes lets us know that this is war and all bets are off. This is best realized as Blake and Schofield first cross into No Man’s Land, a dead zone in Northern France that separates the British and German armies. This territory had been the site of numerous battles and the remains are littered everywhere: carcasses, some little more than skeletons, others just separated limbs, are half-buried in the mud, flies swarm everywhere while rats devour horses or anything they can find. In one particularly gross sequence, Schofield tears his hand on barbed-wire only to slip and plunge that same hand inside of a mangled, damp corpse.

During stretches like this, Deakins’ single camera glides gracefully by, often directly behind the two soldiers, thus putting us right in their footsteps. The perspective is jarring not so much because of what’s right in front of our eyes, which is horrifying enough, but by what we can’t see and the unpredictability of it. As we’re weaved in and out of trenches, through trees and fence lines, it is largely Deakins stunning imagery that keeps us engaged from moment to moment. Are there some deceptive edits out there for the eagle-eyed viewer? Sure, and Deakins cleverly covers them with ample use of shadow and under the cover of darkness. Already considered among the best, if not the best, cinematographers on the planet, Deakins is at the top of his game  and creates a number of indelible shots, including a night sequence in a decimated village flashing like lightning with the firestorm of combat. But it should also be acknowledged that not even Deakins is perfect, and certain anomalies crop up that a traditional technique would’ve avoided. Time passes strangely (it could be argued this incoherence is deliberate, but I would disagree), and certain unmissable things outside the frame of reference are, nevertheless, missed until it’s convenient. They only marginally impact your immersion, and otherwise this as good as use of this narrative technique as we’ve ever seen.

While it’s easy to get lost in the visual magic Deakins and Mendes are crafting together, we can’t overlook the actors who are shouldering the emotional burden.  MacKay has been an actor on the rise for a few years, since his breakout role in Captain Fantastic, and winning performances in little-seen films such as Marrowbone, Ophelia, and  Where Hands Touch. But this is by far the biggest role of his career, and he sells the shock and anguish that comes with being a young man thrust into such an inhuman situation. And yet, Schofield is no stranger to it. Behind his wide eyes is a sense of acceptance that this is just the way things are, and that’s almost as scary as any of the terrible things we’re made to look upon. Dean Charles-Chapman, probably best known for playing poor King Tommen on Game of Thrones, is the movie’s heart and occasional comic relief.  Bigger names pop up for spot duty, including Colin Firth, Benedict Cumberbatch, and Richard Madden, but it’s Mark Strong as a hardened leader with a very specific warning about battle lust who makes the most impact.

That Mendes would take such a gamble on a WWI film, the war which Hollywood has had the least interest in depicting, only makes 1917 more of a precious jewel. I suspect we’ll see a rash of others now, but they’ll have a tough time surpassing 1917, the best movie of the year and an essential addition to the genre.