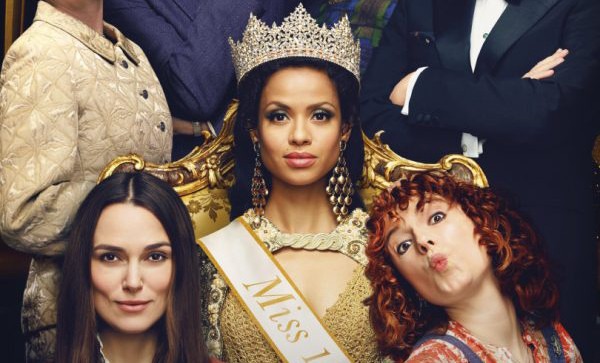 A little piece of history was made recently when for the first time ever all major pageant winners were women of color. That’s pretty wild when you consider the first black Miss America contestant wasn’t until 1971 and the first winner in 1983 when Vanessa Williams took the crown. That makes this the perfect time for the trailer for Misbehaviour, which tells the true story of the controversial 1970 Miss World competition.

The 1970 Miss World pageant is remembered nowadays for the on-air protest that totally rattled its host, comic legend Bob Hope. It saw the crowning of the competition’s first black contestant, Grenada’s Jennifer Hosten, played in the film by Gugu Mbatha-Raw. Keira Knightley plays feminist activist Sally Alexander, a leader in the newly-formed Women’s Liberation Movement. Hope is played by Greg Kinnear, with roles for Lesley Manville, Jessie Buckley, Keeley Hawes, Rhys Ifans, and Suki Waterhouse. Amazing cast.
Behind the camera is Philippa Lowthorpe, best known for her work on The Crown.
SYNOPSIS: In 1970, the Miss World competition took place in London, hosted by US comedy legend, Bob Hope. At the time, Miss World was the most-watched TV show on the planet with over 100 million viewers. Claiming that beauty competitions demeaned women, the newly formed Women’s Liberation Movement achieved overnight fame by invading the stage and disrupting the live broadcast of the competition. Not only that, when the show resumed, the result caused uproar: the winner was not the Swedish favourite but Miss Grenada, the first black woman to be crowned Miss World. In a matter of hours, a global audience had witnessed the patriarchy driven from the stage and the Western ideal of beauty turned on its head.

Misbehaviour opens next March in the UK, and hopefully a US date will soon follow.