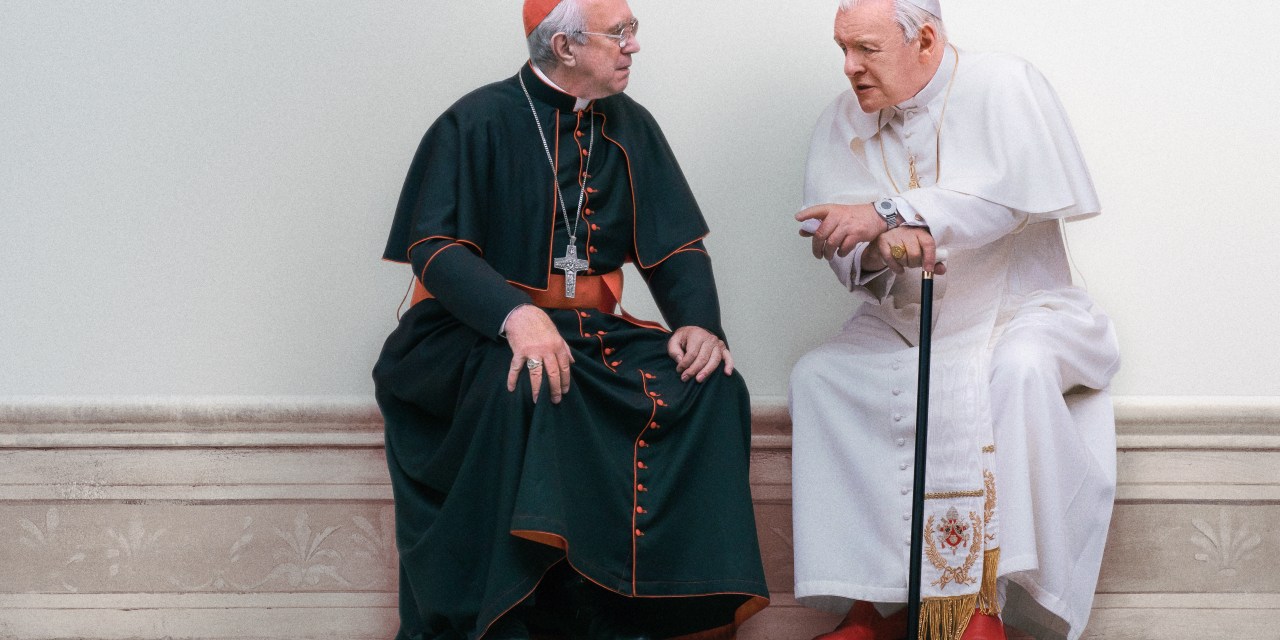 Netflix finds itself with an embarrassment of riches this awards season. Unlike last year when Roma was the horse they could back fully, the streamer has multiple movies with a legit shot at some Oscar love. One that has slipped through the cracks a little bit but is starting to gain momentum, is The Two Popes, which stars screen veterans Jonathan Pryce and Anthony Hopkins as real-life Popes Francis and Benedict during a crucial moment for the future of the Catholic Church.

Directed by Fernando Meirelles (City of God) and penned by Anthony McCarten (Bohemian Rhapsody, The Theory of Everything, Darkest Hour), The Two Popes centers on a historic moment in time following Pope Benedict’s sudden resignation. A meeting with his eventual replacement, the progressive Pope Francis, leads to a clash of ideologies full of humor, hope, and understanding.
McCarten has had the Midas Touch over the last few years, and he’s been getting a lot of buzz for his screenplay. Personally, I think it’s a sure bet for an Oscar nomination if not an outright win. But the real joy is watching two legends like Pryce and Hopkins tangle on the big screen. This is a movie that you don’t need to care about the Church to enjoy. It’s just a real pleasure.
SYNOPSIS: From Fernando Meirelles, the Academy Award-nominated director of “City of God,” and three-time Academy Award-nominated screenwriter Anthony McCarten, comes an intimate story of one of the most dramatic transitions of power in the last 2,000 years. Frustrated with the direction of the church, Cardinal Bergoglio (Jonathan Pryce) requests permission to retire in 2012 from Pope Benedict (Anthony Hopkins). Instead, facing scandal and self-doubt, the introspective Pope Benedict summons his harshest critic and future successor to Rome to reveal a secret that would shake the foundations of the Catholic Church. Behind Vatican walls, a struggle commences between both tradition and progress, guilt, and forgiveness, as these two very different men confront elements from their pasts in order to find common ground and forge a future for a billion followers around the world.

The Two Popes opens in theatres on November 27th before coming to Netflix on December 20th.