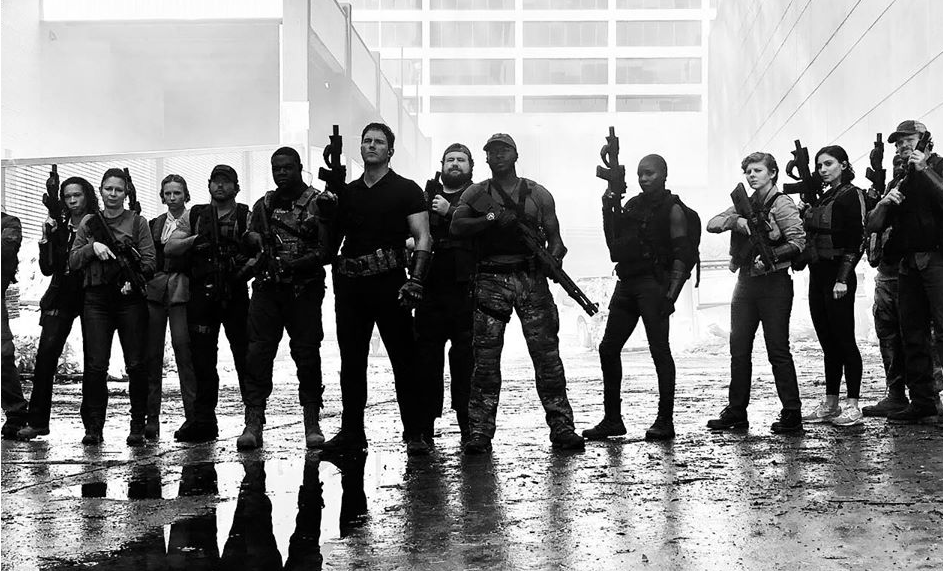 Chris Pratt isn’t hurting for new franchises or anything, but earlier this year he signed on for what could be a new one in Ghost Draft. The live-action sci-fi film will be directed by Chris McKay, director of The Lego Batman Movie, and features a very cool Edge of Tomorrow-esque premise involving an alien invasion. While I really dug that title, it now has a new one, The Tomorrow War, with a first look at Pratt alongside his battle-hardened cast.

Production is underway on The Tomorrow War, and Pratt has dropped the first image of him looking like he’s ready to take on any extraterrestrial threat. The story finds humanity making a last ditch effort to save themselves from alien invasion by reaching back into the past and enlisting soldiers from different eras to fight the war. Pratt plays a man who is drafted to fight in a future war where humanity’s fate depends on him confronting his past.

Pretty cool, right? You can get warriors from different eras with different personalities, styles, weaponry, etc. I love it.

The script is by Deadfall writer Zach Dean with Pratt as a first-time exec-producer. You can read his excitement about that in the image’s caption.

View this post on Instagram
This is my first time executive producing on a movie! And I can finally post about it!!! The title “Ghostdraft,” turned out to be problematic for various reasons so we started looking at other options… We went through: Generation Alien World War A Generation Gone Saving private Ryaalien WWZ2 but with As not Zs HORIZON WHITESPIKE HERO movie brought to you by Verizon JUrassic Draft GENERATION Draft Miller genuine Draft City Slickers Alien Dawn Rapture Dawn Apocalypse Dawn Hero Dawn Destiny war Saving tomorrow The Tomorrow War THE TOMORROW WAR THE TOMORROW WAR!!!! And that’s when it hit me…. We’re calling it #TheTomorrowWar So get ready, cause I’m gonna auction off a set visit very soon. Details coming. And you’re gonna be seeing a lot of pics and posts from set!!! ???♥️?☠️
A post shared by chris pratt (@prattprattpratt) on Nov 9, 2019 at 10:27am PST