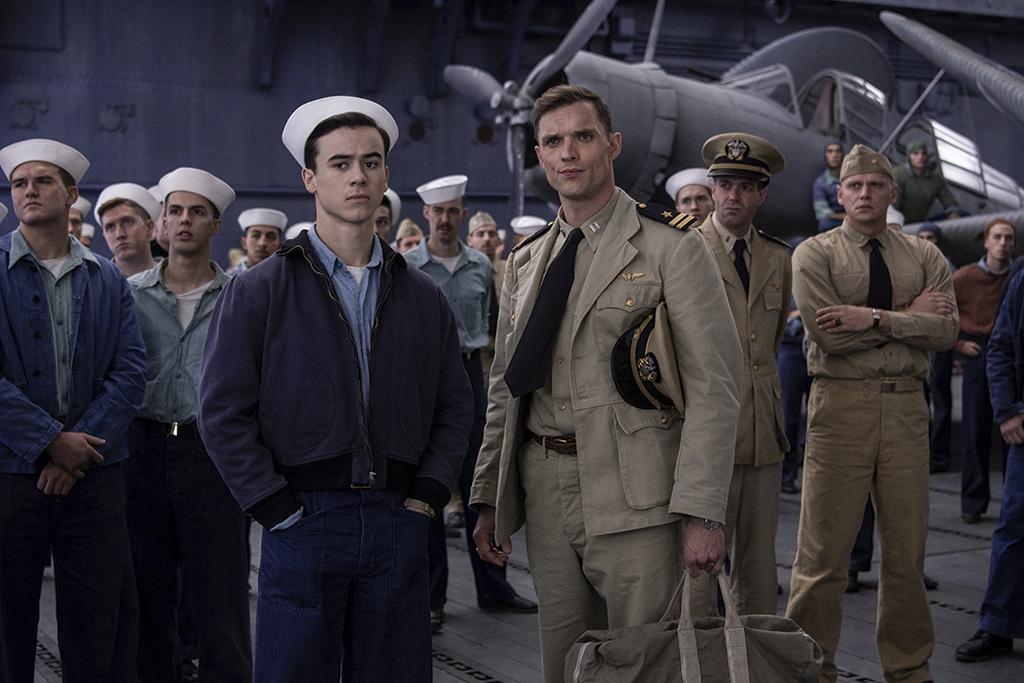 Midway is exactly the war film you would expect from disaster movie peddler Roland Emmerich. For some, that it’s big, dumb, and has more explosions than characters you give a damn about will be seen as a plus, just as many feel the same way about Michael Bay movies. You don’t show up to an Emmerich film expecting authenticity, which makes the “Based on True Events” header a joke in itself, but nobody expects it to be quite so dull and badly acted, either.

Badly acted largely due to a cast who are given a cringe-worthy script from Wes Tooke devoid of anything that resembles human emotion. Not even actors the caliber of Patrick Wilson, Dennis Quaid, Aaron Eckhart, and Woody Harrelson can make heads or tails out of the rah-rah speechifying and expository statements they are forced to rattle off. Emmerich’s take on the battle of Midway is about as retro as they come, using a scaled-down color palette and a heightened, almost superheroic tone similar to the bombastic war movies of a bygone era. It’s an interesting choice to make and might have worked with a better screenplay that truly honored the sacrifices made by these real-life heroes.

In true Emmerich fashion, we’re thrown into the action early as the Japanese launch the infamous attack on Pearl Harbor.  The devastation is massive; ships torn asunder, fires raging, as Japanese warplanes launch strafing run after strafing run like something out of Star Wars. In the midst of all this emerges hotshot Navy pilot Dick Best, and no that name isn’t a joke. He’s a real war hero, worthy of a much better performance than Ed Skrein can give him. Best wants to punch back immediately, but of course, he can’t. Instead, he acts like a jerk while the higher-ups come up with a strategy for response.

After the carnage of the opening attack, the film slows down as intelligence is gathered leading up to the battle of Midway. Patrick Wilson plays Intelligence Officer Edwin T. Layton, who figures out early on where the Japanese will attack next, but has to convince his superiors, including Woody Harrelson as Admiral Chester Nimitz, that the divisive code-breaking tech he’s using is sound. None of this stuff is compelling in the least. There’s a hint of an underdog story as Layton tries to get Washington to support his theories, but it doesn’t really go anywhere. Meanwhile, other characters are introduced who serve little purpose. Dennis Quaid’s Vice Admiral William “Bull” Halsey is around long enough to bark a few orders before being shuffled off with a case of shingles (!?!?), Nick Jonas plays an easygoing soldier who doesn’t really care about anything, and whole lot of other actors with mustaches who fail to make much of an impression. Tooke’s screenplay identifies them all by whatever their singular trait might be. “He’s the man who tried to warn us!”, greets Layton. “He’s the best pilot we’ve got!” is about the only thing good anybody has to say about the appropriately-named Best. Don’t go looking for too much from the female characters, either, one of which is played by Mandy Moore. As Best’s long-suffering wife, she exists to make sandwiches late at night and worry about his safety.  Moore is given little from Skrein to connect with emotionally and he is especially terrible during their scenes together.

Midway deserves credit for offering an even-handed look at the Japanese, as well. A tremendous amount of time is dedicated to capturing their side of the conflict, and how their code of honor clashes with the overconfidence they bring into every fight. It’s not quite Letters from Iwo Jima level, but I found the look at Japanese war culture to be fascinating and deserving of even more time.

But at least the action is good, right? Well, sure, as long as you aren’t expecting realistic aerial dogfights or naval combat. This is video game-level stuff, with some slick CGI visuals that you can tell Emmerich squeezed every bit of that $100M budget to get. If this is all you came for, you might be disappointed there isn’t more, as two major setpieces are about all you get. Unfortunately, it’s all the stuff in-between that torpedoes Midway from being all it could be.