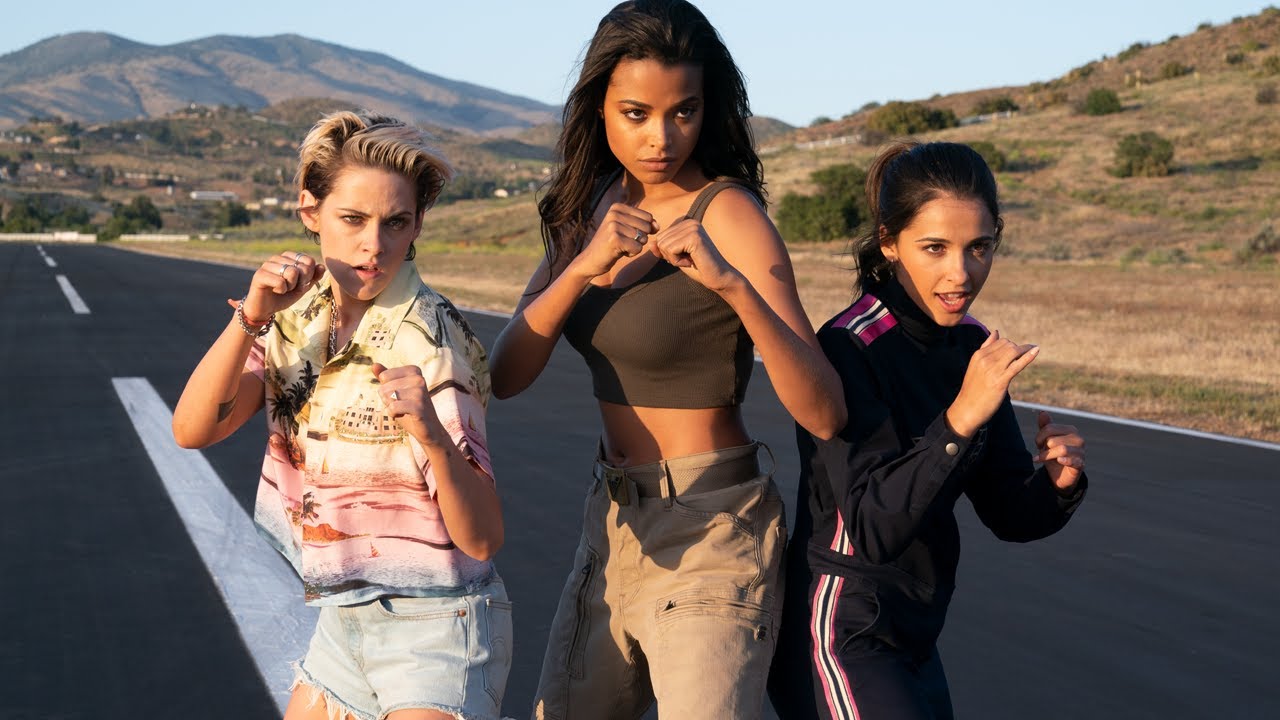 It only takes a moment for Sabina (Kristen Stewart) to literally wrap the first man in Charlie’s Angels around her finger. Sitting across from a typically chauvinistic, rich blowhard who sees women only as sex objects, Sabina projects confidence, strength, humor, and wit as she easily seduces her soon-to-be victim. Within moments he’s tied up in curtains, his security guards are unconscious on the floor, and Sabina…well, she gets pushed off of a roof. It’s okay, though. She survives, and even waves a flamboyant farewell aboard an ascending helicopter.

Charlie’s Angels, a reboot of the franchise we last saw with 2003’s Full Throttle, isn’t subtle. It literally begins with the words “I think women can do anything.” No version really has been, whether it’s the classic 1970s TV series or McG’s bombastic flicks from two decades ago. But this one has the wind of the #MeToo and #TimesUp movements at its back, and so the female empowerment message is amplified even if writer/director/co-star Elizabeth Banks only plays it up think in the opening minutes. The rest is focused on fun, not only for the audience but for the cast who are having even more of a ball than Cameron Diaz groovin’ on the set of Soul Train.

This new-era Angels is led by Stewart’s reckless, silly, and awkward Sabina; Ella Balinska as the tough-as-nails former MI6 agent Jane; and Naomi Scott as the techno-dork Elena, who is swept up into the Townsend Agency after blowing the whistle on her bosses who have developed a form of clean energy that can also be weaponized. The franchise has gone global now, with multiple locations around the world and just as many Bosleys (including a few celebrity surprises) to protect the band of female super-spies. The grandfatherly Patrick Stewart is one, although he’s set to retire after decades of loyal service. Banks and Djimon Hounsou pick up where he left off, with the latter acting also as a sensei and close friend to the oh-so-serious Jane. But when Elena becomes a target of a silent assassin (Jonathan Tucker), the collateral damage has tragic results for the entire Angels squad.

Based on the opening minutes, which includes infomercial-worthy scenes of random girls playing sports, smiling, having fun all around the world, you’d think Banks was about to shove a hearty helping of girl power right down your throat. Banks has a choice to make, though. The previous movies, of which I am a huge fan, were wild, gravity-defying actioners with hyper-sexualized characters. They were about as tongue-in-cheek as they get. This newer version is completely different. It takes the notion of sisterhood seriously, which also goes for the action set pieces which are cleverly constructed to make the most of each character’s strengths. The Angels are truly a team and fight like one, with the highlight a pitched hand-to-hand battle at a rock quarry where only some perfectly-timed teamwork saves one from a gravelly fate. There’s nothing here that’s instantly memorable, and certainly nothing as over-the-top as what McG would’ve done, but in only her second turn as director Banks has proven she has strengths other than comedy. That theme extends to the Angels, who find plenty of ways to dress up sexy (hot science nerd is a thing, and I dig it) but aren’t doing it to be eye candy for us guys. They’re sexy because of how capable they prove to be in just about everything, and that includes whoopin’ a lot of ass.

Surprisingly, it’s Banks’ leaning on her comic background that slows the movie down at points. In particular, Banks’ screenplay feels off as she tries to find a comedic groove. Unfortunately, it’s Stewart who pays the price for this in the beginning as she is the source of most of the movie’s humor. Both Banks and Stewart eventually hit their stride, and I can say this is the most enjoyable Stewart has been in a movie in ages. Don’t take that to mean she hasn’t always been good, there’s a reason she’s one of the most sought-after actresses in Hollywood, but roles that allow her to cut loose, act a fool, and break free from the sullen persona many who don’t know a thing about her have saddled her with. She has nearly all of the movie’s best one-liners, kicks ass in horse jockey gear, and isn’t shy about eyeing the many other beautiful women who cross her path. This character is so “her” it’s a hope we haven’t seen the last of it.

There’s not a lot of meat on the actual story, however, despite a couple of twists to throw audiences off the trail. The bad guys are lame because…well, all of the guys are lame in this movie, and that includes Netflix heartthrob Noah Centineo as a dorky lab tech, and Sam Claflin (Banks’ The Hunger Games co-star) as a hot-shot tech guru in way over his head.  I kinda dig Tucker’s quiet assassin vibe, though.  He’ll make a great serial killer in something else, I’m sure.

I don’t know if this Charlie’s Angels will linger in the mind any better than previous films did, but I’m not sure that’s the point. Every iteration of this franchise tends to be of that moment, and chances are this one will be the same. Fortunately, soaring with these Angels is a blast and teases bigger, better moments in the future.