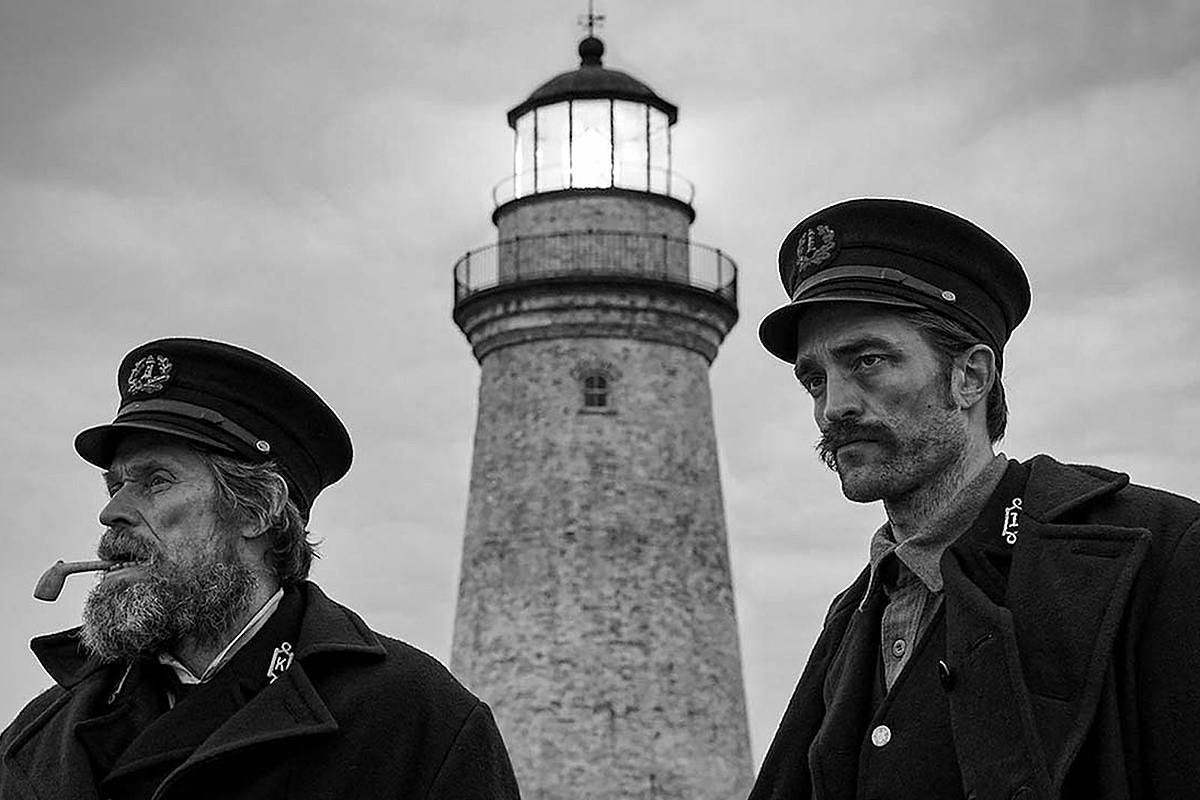 The Lighthouse is a raging sea monster of a movie. Dark and austere, its slimy tentacles reach deep into your chest and threaten to pull you into a salty, watery oblivion. This twisted, briny brew is the concoction of director and co-writer Robert Eggers, almost as if he’s daring you to believe he can’t be as twisted as he was with his atmospheric horror, The Witch. It’s a challenge Eggers easily would win, doing for treacherous one-eyed seagulls what his prior film did for creepy black goats.

Eggers doesn’t even give time to get our sea legs before we’re tossed headlong aboard a creaky ship sailing into fog so dense and angry you expect something to come leaping out of it, The Mist-style.  The tension is ratcheted every few moments by a disturbing foghorn boom that rattles the bones, all part of composer Mark Corven’s mad design. The cramped aspect ratio and deathly black & white photography would almost be too much if it weren’t for a skeletal, sunken Robert Pattinson and a Willem Dafoe so mangy and weather-worn you imagine he stinks of years-old ale.

Pattinson plays apprentice lighthouse keeper Ephraim Wilson, with Dafoe as his boss Thomas Wake. Together, they’re beginning a four-week stint that should be good, honest hard work. Ephraim is quiet, distant, slow to anger even as the quick-tempered, bossy, and very flatulent Thomas shoves him into one menial task after another.  There’s something off about Thomas, and it has more to do with him drinking like a fish and farting up a disgusting, gassy storm. He won’t let Ephraim near the lantern, guarding its light and that of the lighthouse’s upper levels with a strange ferocity. Meanwhile, bad omens are manifest in Ephraim’s weird visions; mermaids and mermaid genitals, hungry seagulls, tentacled sea monsters, and worse.

Liquor’s spell, and the coming end of their shift, eases up any hostilities between Ephraim and Thomas. They engage in song, drink, and dance so bizarre it’s like a scallywag version of the party scene from The Matrix. But someone has angered the ocean gods, because instead of their ship home an unrelenting storm arrives. Trapped on an island that feels too small, in a lighthouse getting more cramped by the day and with dwindling supplies other than alcohol, shit starts getting real. Neither Ephraim or Thomas is very trustworthy, but with only one another to rely on they spend equal time hating and drunkenly sobbing in one another’s laps. Secrets are revealed that shouldn’t have been (You’ll be hearing “Why did you have to spill the beans, lad?” along with Dafoe’s farts in your sleep), and madness is starting to set in. It’s just hard to tell which one is losing their mind the fastest and what happens when they hit rock bottom?

Imagine all of this with that damn foghorn echoing through your ears every few minutes, always keeping you off-balance.  It would get oppressive and unbearable if Eggers didn’t keep a tiny bit of distance from the madness, and allow for a little bit of humor to set in. Pattinson’s dour glare could turn a medusa to stone, while Dafoe is so off-kilter you’d swear he was actually a drunken puddle throughout the shoot.  There aren’t any other castmembers, unless you count that ominous seagull, so everything leans on Pattinson and Dafoe who are both tremendous in capturing an old-fashioned seaman’s dialect. Like others, I was hesitant to give Pattinson his due early on but there’s no denying his growth as an actor and willingness to take on challenging films like this one.  It’s not every film he’s asked to masturbate to the thought of mermaid genitalia but that’s what’s called for and, yep, it’s as funny as it is perverse.

The Lighthouse feels like an old sea captain’s folk tale, passed down through generations to scare the landlubbers away. It’s far too grim and primal to be for everybody, but those who trust in Eggers, Pattinson, and Dafoe to navigate them through these troubled waters will be rewarded with a film they’ll be talking about for a long time to come.