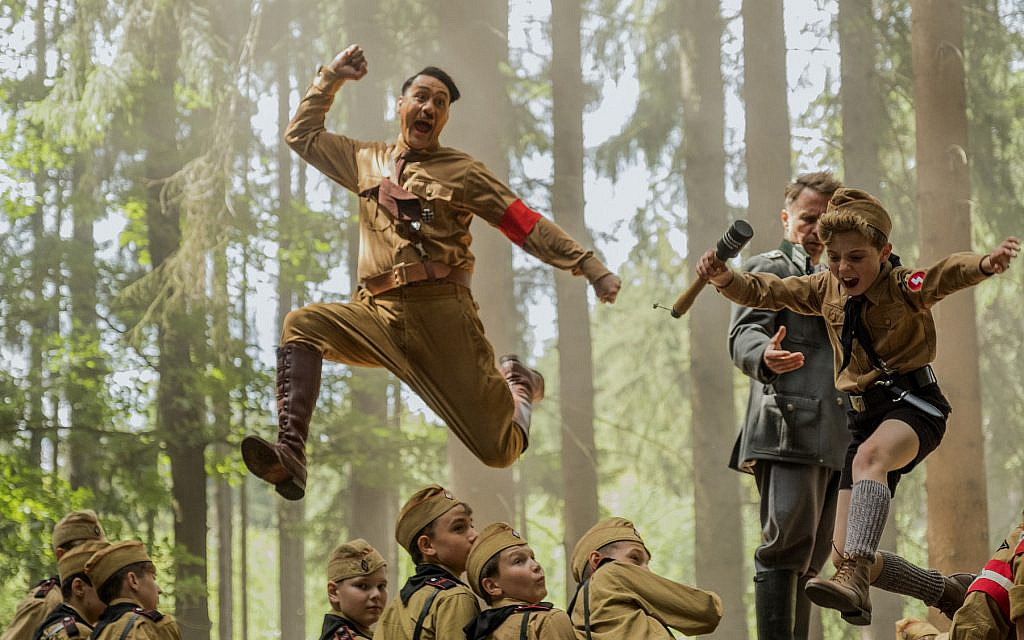 Even before the events of Charlottesville, there was an explosion of hate groups in this country, spurred by the election of the first black President in 2008, and a President who shared their hateful ideology in 2016. I often say movies don’t exist in a vacuum; they must take the world as it is into account, and so a sweet and unusual coming-of-age comedy like Jojo Rabbit seems like an inadequate response. But going for the big comedy punches is what Taika Waititi has always done, and while his Nazi satire doesn’t always strike a perfect balance, the humor and sentimentality he brings feels like something we could all use more of right about now.

Waititi tackles the horrors of WWII  into a light-hearted romp as seen through the eyes of 10-year-old Jojo (Roman Griffin Davis), a puny Hitler Youth whose fanaticism should win him a bunch of friends in the waning months of fighting. Instead, his size and inability to, y’know, kill things, instead makes him a target for bullies and earns him the titular nickname. Like many boys with absent fathers, Jojo has created an imaginary father-figure of superheroic stature. Unfortunately, that turns out to be Adolf Hitler, played with a wonky mustache and wide-eyed glare that makes him look one of the Stooges. Jojo’s idealized fuhrer is a massive goofball whose encouraging words (“You’re the most loyal Nazi I’ve ever met!”) and ridiculous antics highlight the absurdity of the Third Reich’s rigid agenda. He eats unicorn for dinner, dives out of windows like an Aryan superman, and reinforces Jojo’s belief that all Jews are hideous monsters with horns on their heads.

Fortunately for Jojo, Nazi propaganda isn’t the only thing being crammed into his naïve head. He’s often comforted and entertained by his mother Rosie (Scarlett Johansson, quietly having her best year), who challenges Jojo to question authority and reject the teachings he’s learning at Hitler Youth Camp. She shares much in common with Roberto Benigni character from Life is Beautiful, hiding from her son the awful reality of war and bigotry through a veil of laughter and games. But that reality comes crashing down on Jojo anyway when he discovers a young Jewish woman, Elsa (Leave No Trace breakout Thomasin McKenzie) hiding in the walls of his home. While initially repulsed by her, Jojo soon realizes that to turn her in would put his mother’s life in danger. Striking the kind of bargain only a child could conjure up, he agrees to stay silent as long as Elsa teaches him about those “crafty” Jews, so he can create a book that will help Hitler win the war. Of course, the two begin to form a bond that changes Jojo’s life but also frustrates his imaginary pal.

It’s the Elsa/Jojo relationship that provides much of the movie’s charm and warm-heartedness.  Jojo is a kid and a painfully sheltered one; for him to turn away from the drumbeat he’s been hearing for much of his young life it’s going to take more than soft words from his mother. It has to come from contradictory experiences, and Elsa may be a lot of things but a monster is not one of them. Beginning the movie as a misfit who feels abandoned by the Nazis he idolizes and his wayward father, Jojo goes from being terrified of Elsa to wanting her attention and then to genuine affection. The humanity he sees in her due to their mutual experiences also reveals the humanity within himself. In yet another role that finds McKenzie playing the wisest woman in the room, Elsa is both terrified at the thought of discovery but also drawn to Jojo’s childish naivete. There’s a comforting safety to the fantasy world he lives in, proving a welcome escape from the dangers just outside the doors.

Where Waititi missteps is the inconsistency of consequences and vague portrayals of the evildoers. Sam Rockwell plays a dim-witted and kind stormtrooper who runs the Nazi Youth Camp, with Rebel Wilson and Alfie Allen as his even dumber acolytes. They’re funny, especially Wilson, but Waititi plays it safe with them and avoids confronting what they’ve done as members of the Third Reich. He’s content to play it safe until one gut punch that comes out of left field and reorients the entire picture with an added layer of tragedy. It’s tremendously effective but also feels a little like a cheat. Even then, Waititi aims for Jojo Rabbit to be a comforting blanket rather than a hard-hitting sendup. There’s nothing really wrong with that, but you can’t help but expect a little bit more. Still, if all Jojo Rabbit proves to be is a funny, offbeat plea for compassion Waititi is doing us all a service by putting it out there in the world.