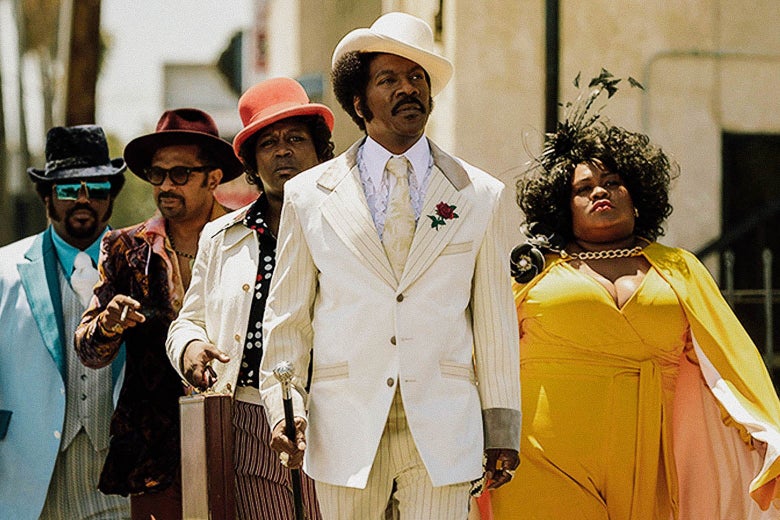 That Eddie Murphy would gravitate to playing R-rated comedian and blaxploitation icon Rudy Ray Moore isn’t at all surprising. The two have quite a lot in common and only a little bit of it has to do with their edgy style of humor. Moore, who I first learned about from a brief scene in The Great White Hype (Hey, I was late to the party!), bristled at the stifling confines being placed on him by the business. Murphy, whose career was red-hot before he left his teens and has ebbed and flowed ever since, has also had to reinvent himself in ways similar to Moore, and do whatever it takes to quiet the naysayers.

In Dolemite is my Name, Murphy reminds us what a consummate entertainer he is. More than just an actor, more than just a comedian, he’s the kind of guy who will do ANYTHING to please his audience, which is something else he shares in common with Moore. We forget how easily Murphy made the transition from an abrasive, offensive standup act to making family-friendly comedies, and then later showing his dramatic mettle. While nobody is going to call Moore much of an actor, the guy couldn’t act his way out of a paper bag and it gets worse when asked to do a fight scene, but the love he has for entertaining others is there. Dolemite is my Name gets down to the root of where that comes from, early on showing Moore’s struggles working by day at a record store and doing a lame hosting gig at night and maybe getting to tell one or two jokes before the headliner.  His need to be famous fueled by a childhood of abandonment and abuse, Moore always seems to be fighting never to return to that part of his life.

“How’d my life get so small?”, he wonders aloud to a friend, another black entertainer just trying to make it.

These early scenes are presented in fairly standard biopic form by director Craig Brewer, and if there’s any complaint I have it’s that the film could be crazier, more gonzo, to match the path Moore’s career would ultimately take. Hearing on the street about a kung-fu super-pimp named Dolemite, Moore would create a character based on the urban legend, take the mountain of filthy jokes around him and make them his own. It’s at this point when the hiring of Brewer proves a stroke of genius. Capturing the same gritty, do-it-yourself energy of his breakout rap drama Hustle and Flow, Brewer relishes in the creative process. Murphy also comes alive at this point, as Moore begins recording comedy albums as Dolemite, at parties, in living rooms surrounded by friends and whoever caught wind of the act. Word spread, but Moore wanted…well, more. His big breakthrough comes when he and his buddies are at a movie theater, confused by the lack of humor in Billy Wilder’s The Front Page, but seeing the hysterical reactions from the all-white audience

“If only I can get up in that light”, he says pointing at the beam of light from the projector. That’s when Moore decides to bet on himself and finance a Dolemite movie, bringing the swaggering, vulgar character to the big screen against all odds. What follows will be compared to The Disaster Artist by some, but Dolemite is my Name is a much better film with a lot more to say. I always saw James Franco’s movie about The Room to be an insider joke, whether he wanted it to be that way or not.  Moore’s story is far more compelling than the cartoonish Tommy Wiseau’s could ever be. Moore, his buddies, and whoever they could scrounge up to help make the movie, had to content with racial tensions, people wanting them to fail, self-doubt, and segregation in the movie business. Their bizarre guerrilla production could barely keep the lights on, and had to get in an actual car chase with cops for a key scene. On a personal level, Moore had to deal with his own views on what a movie star should be, but always found a way to get through it using what he knew best: comedy.

The combination of Murphy, Brewer, and Ed Wood writers Scott Alexander and Larry Karaszewski is a potent one that celebrates the eternal power of film while figuratively playing the Dozens with movies of that era.  Brewer highlights the colorful zoot suits and big hairdos of the time, making it look like an authentic blaxploitation movie, while the funky soundtrack features songs from the original Dolemite, performed by Moore.

Representation plays a big part in Dolemite is my Name, as Moore sets out to make a movie with folks that would never be cast in a Hollywood movie. While this applied to Moore himself, too, it’s especially true of his friends played the hilarious trio of Craig Robinson, Mike Epps, and Titus Burgess. This is my first encounter with Tony-nominated actress Da’Vine Joy Randolph but she is terrific as Lady Reed aka Queen Bee, a troubled housewife that Moore offers an opportunity to, first as a standup comedian then as an actress in his movie. And it would be impossible to ignore Wesley Snipes as D’Urville Martin, who Moore convinced to be part of Dolemite by giving him a chance to direct and co-star as the villain. Snipes hasn’t had a ton of opportunities to be funny lately but he is an absolute riot as the flaky and pompous Martin. The shocked/horrified expressions he gives at the shabby production are priceless and it only has me more excited to see what he does when reunited with Murphy and Brewer for Coming to America 2.

I don’t always like to throw around Oscar predictions but there are two or three performances here that are deserving of notice, with Murphy’s obviously right at the top. Murphy is extraordinary, the cast surrounding him is incredible, and Dolemite is my Name is one of the best, most entertaining movies of the year. Hopefully, we can stop talking about Murphy’s many comebacks and keep him around for the long haul.