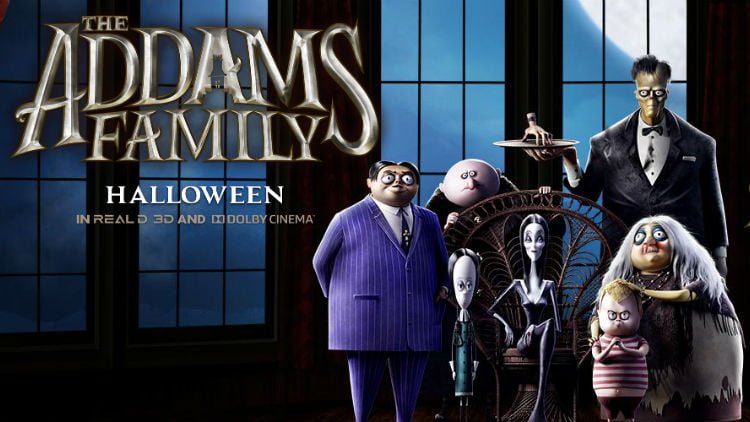 The Addams Family
is one of the OGs of creepy, spooky, goth comedy in modern American consciousness.
A satirical flip on what was considered the ideal America family by Charles
Addams in the late 1930s in the pages of the New Yorker the concept resonated
with the public. Since then the Addams Family has seen many interpretations
with the most well-known being the Barry Sonnenfeld films from the 1990s
starring Raul Julia, Anjelica Huston, Christopher Lloyd, and Christina Ricci.
Now in 2019 we have a new one, an animated feature with the voices of Oscar
Issac, Charlize Theron, Chloë Grace Moretz, Bette Midler, Nic Kroll, Finn
Wolfhard and Snoop Dogg (yep the S, N, double O, P) as the titular family in a
new adventure to introduce them to a new audience 80 years after their
debut.

This is an origin story of sorts, at the beginning it’s
about parents dealing with their children coming of age and accepting people as
they are, without judgment. In a way, very in tune with the times. The story
begins with the marriage of Gomez and Morticia as they are being chased out of
their town. They find a place to start a family far away from most people, in
New Jersey. Fast forward a few years, we see that Wednesday wants to know more
of the world but Morticia is leery of letting her explore at this age.
Meanwhile, Gomez is trying to get Pugsley ready for the “coming of age” tradition
by every member of the Addams clan, but Pugsley isn’t good at it like his
father. Hence, we have the familial conflict. On top of this, there is an HGTV
like home renovation host that is trying to sell a town of homes that looks
like the stereotypical version of American suburbia, who is not too fond of
this now unhidden creepy house with a not “normal” family on the hill that
could threaten her utopia. All that sounds like a lot and it is. Each of the
conflicts is as important as the next, because of this none of them have enough
time to really resolve themselves satisfyingly. Each feels a bit cramped and
even though most of the jokes and visual gags land you still want a bit more
from the parents and children’s arcs.
Overall The Addams
Family is a decent animated movie that most will enjoy and it’s coming out
in a perfect season for it. Don’t go in looking to be amazed like you would at
A Pixar or Disney animated feature in terms of graphic fidelity. The filmmakers
went to capture the original look Charles Addams created and they did a great
job.
Three out of five
stars